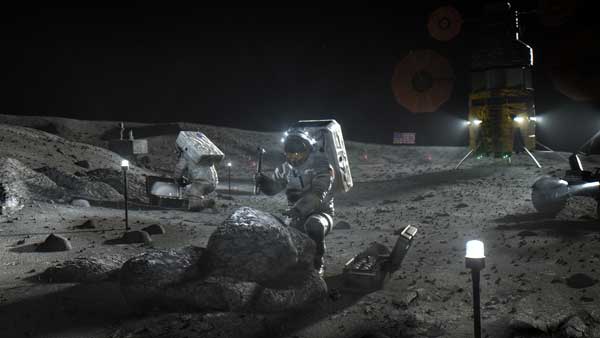 HOUSTON (NASA PR) — Artemis moonwalkers exploring the lunar South Pole will wear revolutionary spacesuits that stand up to the Moon’s harsh environment and keep them safe. NASA is embracing commercial partnerships to optimize spacesuit technology and inspire pioneering in the space market

NASA published a request for proposal (RFP) Sept. 29  for companies to compete for the agency’s future purchase of spacesuits and support services for spacewalks on the International Space Station, during Artemis lunar surface missions, and as needed on Gateway in lunar orbit.

Building on more than 55 years of lessons learned during spacewalks, Johnson Space Center will continue NASA’s in-house risk reduction effort by testing the current exploration spacesuit design – known as the Exploration Extravehicular Mobility Unit, or xEMU – in parallel with the services procurement.  NASA will make data available for use by commercial companies from its design and development work. By uniting with commercial industry partners, the space economy will expand and propel forward, ultimately revolutionizing the human experience in space.

“Our undertakings in low-Earth orbit, at the Moon and beyond have evolved and are calling for innovative technology.” said NASA Deputy Administrator Pam Melroy. “The next astronauts on the Moon – including the first woman – will be kept safe in revolutionary spacesuits that fit better and enable greater human exploration than ever before.”

NASA will collaborate with one or more companies to execute spacewalk activities in microgravity from the space station and Gateway; partial gravity EVAs from the lunar surface; as well as future advanced spacewalks to support NASA’s human spaceflight programs.

Services to be performed under this contract include providing spacesuits (life support, pressure garments, informatics, and avionics), tools and equipment, vehicle interfaces, flight and ground support hardware, and support to training and operations. The partner is responsible to provide fully demonstrated and certified xEVA systems and services capable of meeting NASA’s technical, reliability, and availability needs. The commercial partner or partners will  support system operations during spacewalks.

In April, NASA announced its intent to establish public-private partnerships for spacesuits services with a request for information asking for industry feedback to inform its new strategy. In July, the agency released a draft request for proposal readying companies to compete for an EVA as a Service solution, including use of certified suits worn by NASA crewmembers in spacewalks. Partnering with commercial industry paves the way for cost savings and makes it increasingly viable for private citizens and industry to join the endeavor as customers or providers.

“NASA’s investment in commercial spacesuits is another way that we are fostering a new lunar economy with private partners,” Melroy said. “Similar to our partnerships in low-Earth orbit, this endeavor will create jobs and help fuel an active economy at the Moon.”

NASA plans to achieve one or more spacewalk demonstrations with the new suit as early as 2023, with the full suite of spacewalk services available following the demonstration. As private space travel opportunities expand, this approach to spacesuit development aims to foster innovations in design, manufacturing, and purchasing so that NASA is just one of many customers in the marketplace.

While a services approach is a new method for spacesuits, NASA is successfully using this public-private partnership strategy today for launch services and both crew and cargo deliveries to the International Space Station. NASA is also leveraging industry partnerships for other key Artemis elements, including human landing system services and Gateway deep space logistics services.

The RFP is available online. Proposals are due Dec. 1, 2021. The opportunity is open to all of industry, and NASA anticipates making one or more awards in spring 2022.

NASA’s Artemis missions include landing the first woman and first person of color on the lunar surface, sending a suite of new science instruments and technology demonstrations to study the Moon, and establishing a long-term presence. The agency will leverage its Artemis experience and technologies to prepare for humanity’s next giant leap – sending astronauts to Mars.

Learn more about the International Space Station at: