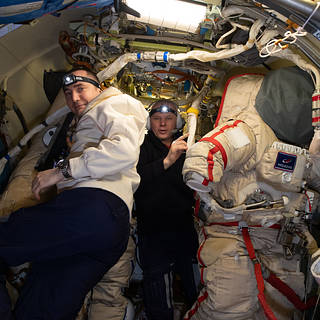 Two Russian cosmonauts are scheduled to conduct a spacewalk outside the International Space Station Wednesday, June 2, to continue preparing the Pirs docking compartment airlock for undocking and disposal later this year.

Live coverage will begin at 1 a.m. EDT, with the spacewalk beginning about 1:20 a.m. on NASA Television, the agency’s website, and the NASA app.

Expedition 65 Flight Engineers Oleg Novitskiy and Pyotr Dubrov of Roscosmos will emerge from the Poisk module on the space-facing side of the Zvezda service module for a spacewalk expected to last about six and a half hours. The two cosmonauts will disconnect all external mechanical links between Pirs and the station, reposition spacewalk hardware and antennas, and relocate other gear previously used for spacecraft dockings to Pirs.

During the spacewalk, the cosmonauts will prepare Pirs for removal from its port by the uncrewed Progress 77 cargo ship on the Earth-facing side of Zvezda, clearing the way for the arrival of the new Russian Multi-Purpose Laboratory Module named “Nauka,” which is Russian for “science.” The undocking of Pirs is scheduled for this summer, about two days after Nauka launches from the Baikonur Cosmodrome in Kazakhstan.

The cosmonauts also will replace a fluid flow regulator on the nearby Zarya module and replace biological and material science samples on the exterior of the Russian modules.

Novitskiy, who is designated as extravehicular crew member 1 (EV1), will wear a Russian Orlan spacesuit with red stripes. Dubrov will wear a spacesuit with blue stripes as extravehicular crew member 2 (EV2). This will be the first spacewalk for both cosmonauts and the 238th spacewalk overall in support of space station assembly, maintenance, and upgrades. It also marks the sixth spacewalk of 2021.

Learn more about the International Space Station and its crew at: