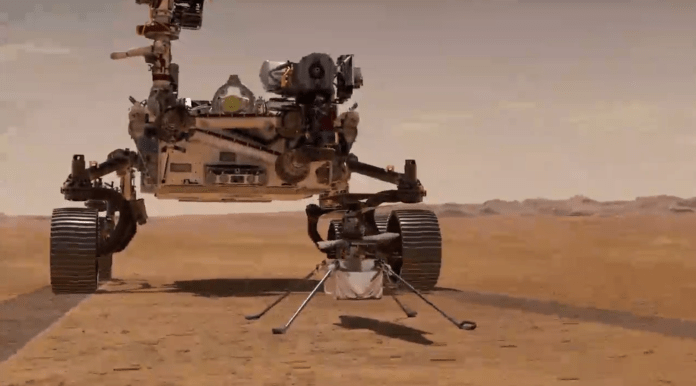 NASA is ready to take its first spin at flying a helicopter on another world as the agency’s Mars helicopter, Ingenuity, prepares for launch in July.

The helicopter is part of NASA’s Mars 2020 mission, the star of which is the Perseverance rover, a robot designed to help scientists determine whether life on the Red Planet has ever been possible. Ingenuity isn’t a core tool for that objective, but it’s hitching a ride with the rover to test NASA’s ability to fly on another world.

“The thing that has me the most excited as the NASA administrator is getting ready to watch a helicopter fly on another world,” NASA Administrator Jim Bridenstine said during a news conference for the mission held on June 17. “That’s something that’s never been done before in human history, and here we are.”

Ingenuity has been in the works for six years, but now it’s attached to the underside of the rover, where it will remain for the long journey to the Red Planet, Mimi Aung, lead engineer for Ingenuity, said during the news conference. After the spacecraft arrives at Mars in February 2021 and endures the same “seven minutes of terror” that NASA’s Curiosity rover faced when landing on the Red Planet in 2012, Ingenuity will separate itself from the main rover.

When it tries to take flight, Ingenuity will be at least 160 feet (50 meters) away from the rover itself, Matt Wallace, deputy project manager for the Mars 2020 mission, said during the news conference. However, Perseverance will be able to monitor the flight attempts using some of its 23 onboard cameras; whether Ingenuity can spot the rover from flight remains to be seen, he said.

Ingenuity is flying as a technology demonstration mission, which means NASA has a realistic estimate of the chances something may go wrong. “Getting it to Mars, getting it safely off the vehicle, we’re going to learn a lot,” Wallace said. “We are not looking for an extensive and ambitious return from this technology, we’re looking to learn those first few things that we need to learn.”

The helicopter will attempt three flights on the Red Planet, he said, although that number is subject to change depending how the mission proceeds. “We’re going to take them one flight at a time,” Wallace said.

The Perseverance rover and the Ingenuity helicopter are scheduled to launch from NASA’s Kennedy Space Center in Florida on July 20, with a launch window continuing through Aug. 11; follow the launch next month on Space.com.