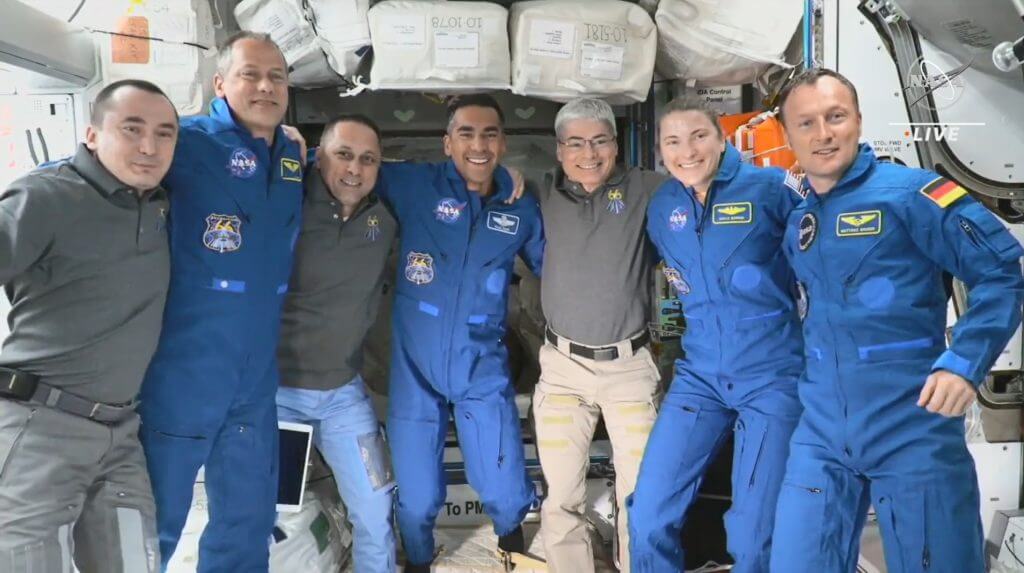 Clearly eager to begin their weather delayed stay in space the NASA ESA SpaceX Crew-3 astronaut quartet docked to the ISS at 6:32 p.m. EST Thursday, Nov. 11, over 30 minutes ahead of schedule – and less than 24 hours after launching from the Kennedy Space Center in Florida.

They floated through the opening one by one led by NASA mission specialist Kayla Barron, to exuberant bear hugs, high fives and thumbs up with the trio of Russian and American crew members already ion board and then participated in a welcome ceremony with their new Expedition 66 crewmates at 9 p.m.

👨‍🚀 The #Crew3 astronauts have arrived!

Crew Dragon Endurance docked autonomously to the orbital complex  at the forward port of the station’s Harmony module while the spacecrafts were flying 260 miles (400 km) above the eastern Caribbean Sea on Thursday, Nov. 11.

The entire rendezvous, docking, hatch opening and welcome ceremony were broadcast live on NASA Television, the NASA app, and the agency’s website – providing ongoing live coverage to welcome the new crew aboard the orbital outpost.

After multiple postponements for poor weather and a ‘minor medical issue’ affecting one of the four multinational crew members, the NASA, ESA SpaceX Crew-3 mission streaked to orbit during a spectacular nighttime launch of US and German astronauts beginning a half year science mission to the International Space Station (ISS) Wednesday evening, Nov. 10 – but only after threatening rain storms that drenched the Kennedy Space Center barely an hour before liftoff added even more unneeded last minute drama and thankfully moved off shore in time.

The SpaceX Falcon 9 darted in and out of thick clouds before disappearing quickly behind them on the roadway to the ISS delighting spectators ringing the Space Coast with a stunning and thrilling sky show.

Falcon 9 and Crew Dragon Endurance soared off pad 39A on a northeasterly trajectory along the US East Coast inclined 51 degrees to the equator flying flawlessly bound for rendezvous and docking with the ISS some 22 hours later on Veteran’s Day, Thursday evening, Nov. 11.