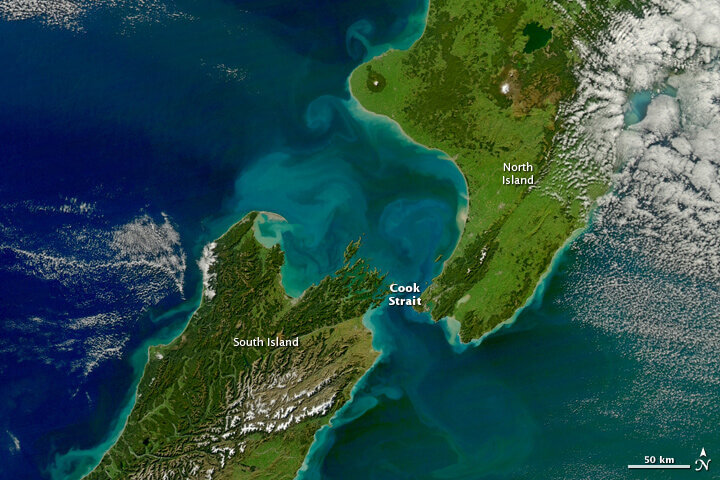 Since mid-September 2022, NASA-funded instruments have been hitching rides on commercial aircraft and collecting environmental data over New Zealand. The collaboration with Air New Zealand is the first known data-collecting partnership between a passenger airline and a NASA Earth science mission.

The new program is part of NASA’s Cyclone Global Navigation Satellite System (CYGNSS) mission, which is a constellation of eight small satellites that collect data on the intensity and direction of storms and hurricanes. Flying in low-Earth orbit above the tropics, the CYGNSS satellites were designed to measure wind speeds over the ocean by examining reflections of GPS signals from choppy and calm water surfaces.

After the satellites were launched in 2016, scientists found that CYGNSS technology could also capture valuable measurements of wetlands, flood events, and soil moisture. That’s where the Air New Zealand partnership comes in. Attaching GPS radar receivers to commercial aircraft offers a new way to observe features of wetlands and rivers that are often hidden from view in visible-light imagery by thick vegetation.

“The airplane-mounted receiver was designed and intended to be a next-generation version of the one that is on CYGNSS,” said Chris Ruf, CYGNSS principal investigator . “This is a great opportunity to start exercising the new technology and testing it to see how the data improves.”

The receiver automatically turns on and off with the takeoff and landing of a New Zealand Airlines Q300 aircraft, which collects data for the length of the flight. After landing, the receivers transmit the observations to a server at the University of Auckland. Ruf’s team at the University of Michigan can then log into that server from Ann Arbor to retrieve the data.

As the aircraft traverses New Zealand, some of its flight paths overlap with those of the CYGNSS satellites. These overlaps will provide the team with a wealth of data to use to validate and improve CYNGSS satellite observations over land, said Ruf. The widely varied New Zealand terrain also provides useful comparison points for data collected from similar terrains around the world. The receivers, which were designed and tested at the University of Michigan, are lightweight and draw a small amount of power from the plane, Ruf noted. The team plans to keep them installed for at least one year.

The program is a partnership among NASA, the University of Michigan, Air New Zealand, the New Zealand Ministry of Business, Innovation and Employment, the New Zealand Space Agency, and the University of Auckland. The Southwest Research Institute (SwRI) leads the development and integration of the CYGNSS microsatellites. The Space Physics Research Laboratory at the University of Michigan College of Engineering leads the overall mission execution, and its Climate and Space Sciences and Engineering department leads the science investigation. The Earth Science Division of NASA’s Science Mission Directorate oversees the mission.

Citation:
NASA Earth science racks up frequent-flier miles in New Zealand skies (2022, October 13)
retrieved 14 October 2022
from https://phys.org/news/2022-10-nasa-earth-science-racks-frequent-flier.html
This document is subject to copyright. Apart from any fair dealing for the purpose of private study or research, no
part may be reproduced without the written permission. The content is provided for information purposes only.