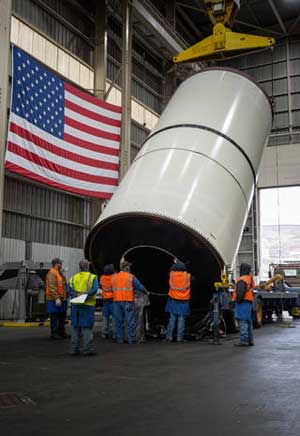 HUNTSVILLE, Ala. (NASA PR) — NASA has awarded the Booster Production and Operations Contract (BPOC) to Northrop Grumman of Brigham City, Utah, to build boosters for the agency’s Space Launch System (SLS) rocket to support nine SLS flights. Northrop Grumman, the lead booster contractor, has produced booster motors for the first three  Artemis missions and is casting the motors for the fourth lunar mission.

This contract, with a value of $3.19 billion, definitizes a letter contract awarded in June 2020 that authorized Northrop Grumman to order long-lead items and build twin boosters for the next six SLS flights. The period of performance extends through Dec. 31, 2031. This includes production and operations for boosters for Artemis IV-VIII and design, development, test, and evaluation of a booster as part of Booster Obsolescence and Life Extension (BOLE) for Artemis IX.

“This contract award ensures NASA will have the most powerful solid rocket boosters ever built for future Space Launch System rockets for the Artemis missions to the Moon,” said Bruce Tiller, SLS Booster Manager at NASA’s Marshall Space Flight Center in Huntsville, Alabama. “The contract allows NASA to work with Northrop Grumman to not only build the boosters for upcoming missions but also to evolve and improve the boosters for future flights.”

The twin solid rocket boosters, which are mounted on the side of the SLS core stage, will produce more than 75% of the thrust for each SLS launch. The boosters were based on the design of the space shuttle solid rocket boosters but include a fifth segment to produce the extra power needed to send the larger SLS rocket to space. As part of this contract, the team also will design and test evolved boosters needed for flights starting with the ninth SLS mission. The new BOLE boosters will replace the steel cases currently used from the space shuttle with a stronger composite case and upgraded structures, electronic thrust vector control systems and propellant materials.

“Our boosters are ready to launch the first flight of the Space Launch System on the Artemis I mission, and we are making great progress producing boosters for the Artemis II, III, and IV missions,” said Tiller. “Upgrading the booster’s performance ensures we can improve SLS’s ability to send astronauts and cargo to the Moon as well as making our processes more efficient.”

The SLS rocket and Orion spacecraft are part of NASA’s backbone for deep space exploration. Through Artemis missions, NASA will land the first woman and the first person of color on the surface of the Moon and establish a long-term lunar presence that serves as a steppingstone on the way to Mars.

For more information on SLS, visit: