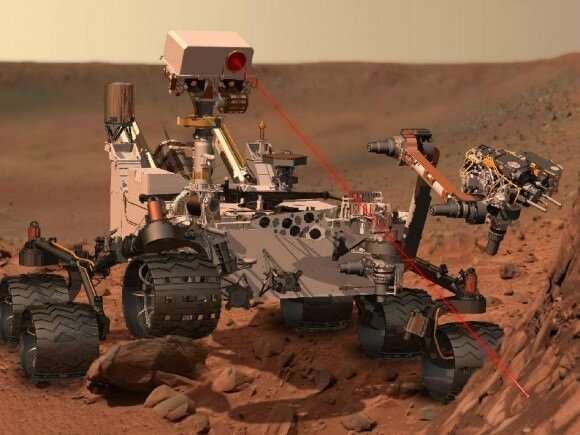 For almost 60 years, robotic missions have been exploring the surface of Mars in search of potential evidence of life. More robotic missions will join in this search in the next 15 years, the first sample return from Mars (courtesy of the Perseverance rover) will arrive here at Earth, and crewed missions will be sent there. Like their predecessors, these missions will rely on mass spectrometry to analyze samples of the Martian sands to look for potential signs of past life.

Given how much data we can expect from these missions, NASA is looking for new methods to analyze geological samples. To this end, NASA has partnered with the global crowdsourcing platform HeroX and the data-science company DrivenData to launch the Mars Spectrometry: Detect Evidence for Past Life challenge. With a prize purse of $30,000, this challenge seeks innovative methods that rely on machine learning to automatically analyze Martian geological samples for potential signs of past life.

Despite sixty years of concerted efforts by multiple space agencies, the search for life on Mars has yielded little more than inconclusive results (as demonstrated by the Viking 1 and 2 landers). Nevertheless, modern surveys have found that Mars was a much warmer and wetter place billions of years ago. This discovery is one of the most profound breakthroughs in planetary science and has led to renewed efforts to find evidence of past (and maybe even present) life on Mars.

During the Noachian Period (ca. 4.1 to 3.5 billion years ago), Mars had a denser atmosphere, and surface conditions were warm enough that liquid water flowed on its surface. Evidence of this is preserved today in the form of river channels, sedimentary deposits, delta fans, and other features known to form in the presence of flowing water. By knowing how long these conditions persisted, scientists hope to determine how long life could have existed.

Unfortunately, conducting chemical analysis on soil and rock samples is time-consuming work. Moreover, analyses can suffer from false positives when they are strictly reliant on human interpretation. By leveraging machine-learning techniques, where analytical models are created from huge datasets, scientists hope to automate the chemical analysis process, making it more efficient and less time-consuming.

For this challenge, NASA is looking innovative methods to automatically analyze data obtained by the Sample Analysis at Mars (SAM) instrument aboard the Curiosity rover. This data is provided by the NASA Goddard Space Flight Center (GSFC) and Johnson Space Center (JSC), and the SAM science team. For years, Curiosity has used the SAM instrument to gather Martian soil and rock samples and subject them to evolved gas analysis (EGA).

This consists of heating samples until they emit gases that can be analyzed by spectrometers for specific chemical signatures. The SAM instrument accomplishes this with a gas chromatograph that separates gases to aid in identifying them, a mass spectrometer that detects elements necessary for life, and a tunable laser spectronometer that detects water vapor and analyzes methane to see if it is biotic in origin (produced by living things).

Greg Lipstein, the principal of DrivenData, said in the challenge press release: “This is a fascinating research question where machine learning tools can have a real impact on how we can learn more about our place in the universe. It’s a great chance to harness the collective intelligence and passion of the data community to advance the state of open science.”

According to the challenge page, the best methods should be able to detect certain families of chemical compounds that are of interest to astrobiologists. These include nitrogen, phosphorous, sulfur, oxygen, and carbon, the chemical building blocks of life, and volatiles such as water, ammonia, and methane, which are associated with biological processes. Competitors will also be able to advantage of the many experimental runs done on analog samples.

From this, competitors are tasked with developing machine learning methods that will support scientists in analyzing and interpreting data collected by missions (in-situ samples) and laboratory instruments (from sample-return missions). It is also hoped that these advancements will help scientists conduct future mission operations with greater speed and efficiency. The competition launched on February 18th and will remain open to submissions until April 18th, 2022.

The winning techniques will receive $15,000 (first place), $7,500 (second), $5,000 (third), with a bonus prize of $2,500. In addition, the winning entries may be used to help analyze data from Mars and potentially even inform future instruments conducting in-situ analysis. This includes the ESA-Roscosmos ExoMars 2022 mission, consisting of the Russian Kazachok lander, the ESA Rosalind Franklin rover, and NASA’s Dragonfly mission to Titan (Saturn’s largest moon).

“It’s exciting to think there might be clues of past life on Mars,” said HeroX CEO Kal K. Sahota. “These challenges are so inspiring as we search for evidence of extraterrestrial life.”

The challenge is open to anyone aged 18 or older, and participants may compete as individuals or as a team. The competition is open to individuals and teams from anywhere in the world, provided federal sanctions do not prohibit participation (some additional restrictions may apply). For more information on the rules, or to accept the challenge, visit https://mars.drivendata.org