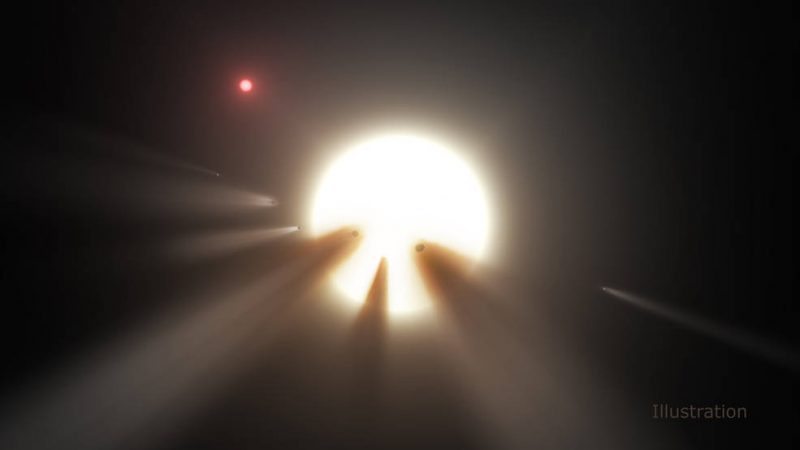 Astronomers believe this object is probably a binary star system. They see the system changing in brightness regularly, every 19.77 Earth-days. They believe the system is edge-on to us, so that we see one star cover the other that often. But there’s also something in the system that’s apparently belching out clouds of dust that also occult (or cover) the star. The 19.77-day period is strict. But the dust occultations of the star are erratic in their shapes, depths, and durations. They’re detectable (at least from the ground) only about a third of the time or less.

The Transiting Exoplanet Survey Satellite (TESS) planet-hunter gathered the data that revealed this object, which is about 2,300 light-years away. Astronomers announced the finding on December 31, 2021.

Astronomers led by Brian Powell of NASA searched the TESS data using machine-learning-based computational tools developed from the observed behaviors of hundreds of thousands of known variable objects. They said the method has previously found disintegrating planets and other bodies that are emitting dust, for example.

The amount of dust in the TIC 400799224 system appears to be quite large. And the brightness dips are rapid. Light from the system can drop nearly 25% in just four hours, followed by several sharp brightness variations that could each be interpreted as an eclipse. But what’s strange is that the occulting object doesn’t appear to be disintegrating; it seems to be remaining intact. The researchers have described it as a unique object of uncertain nature.

The researchers published their peer-reviewed findings in The Astronomical Journal on December 8, 2021.

Is the mysterious dusty object disintegrating?

TIC 400799224 is considered a kind of variable star. But – unlike most known variable stars (which fall into one of several categories) – its dips in brightness have not yet been explained.

For example, it’s not known for certain yet which of the two objects in the binary system is the one that the dusty body is orbiting. Also, depending which star it is, the object can actually block from 37% to 75% of the light in total.

Could the orbiting body be a disintegrating/evaporating planet or other body? Quite possibly, since such objects have been found before orbiting other stars. And, naturally, such objects would produce a lot of dust and other debris. This material can then partly obscure light from the star or stars in its system, which we see as dips in brightness from the system.

Is the dusty object remaining intact?

But the nature of the object orbiting in the TIC 400799224 system is puzzling. The main oddity is that, while a lot of dust is apparently being emitted, the object emitting the dust seems to be remaining intact. As noted in a statement from CfA:

The nature of the orbiting body itself is puzzling because the quantity of dust emitted is large. If the disintegration of an object like Ceres – a dwarf planet and largest object in the main asteroid belt – is producing the dust, the object would survive only about 8,000 years before disappearing. Yet, remarkably, over the six years that this object has been observed, the periodicity has remained strict and the object emitting the dust apparently has remained intact.

The team plans to continue monitoring the object and to incorporate historical observations of the sky to try to determine its variations over many decades.

Right now, the researchers are looking at three possible explanations. One is the disintegration of an object as it passes directly from a solid into a gaseous state (known as sublimation). Another is collisions with a minor planet-like object releasing sporadic dust clouds. The third is dust being shepherded by a planet embedded in the star’s protoplanetary disk. The second one currently seems to be the most likely.

So, in this case, it might not be a disintegrating object. As noted in the paper:

Its detailed properties differ in significant ways from the other objects. TIC 400799224 may be in a category of its own.