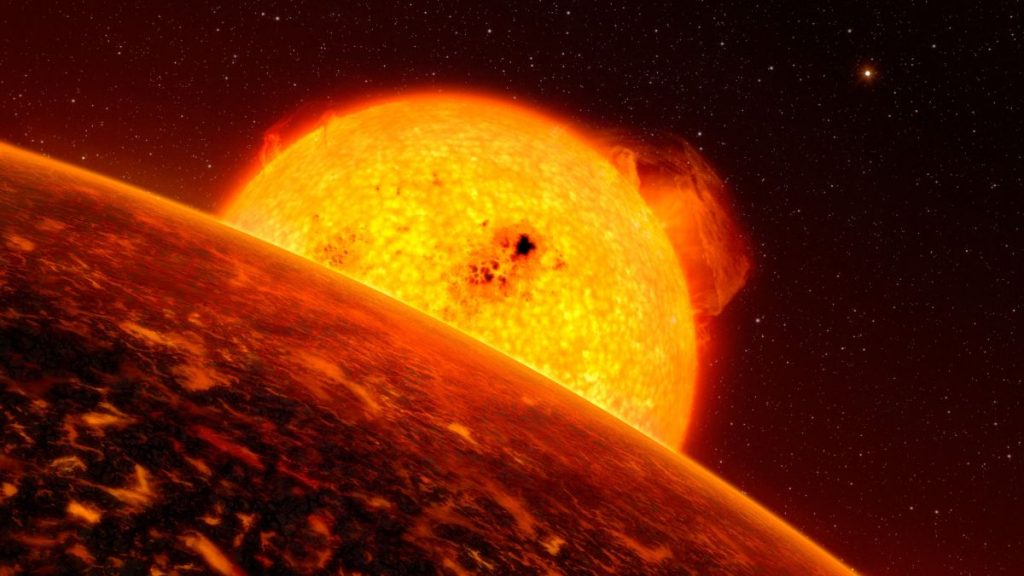 Scientists have modeled the molten surfaces of 16 different types of lava worlds in the laboratory, creating a catalog of basic types of rocky exoplanet that astronomers using the James Webb Space Telescope can reference to characterize alien worlds.

Some terrestrial exoplanets orbit so close to their stars that temperatures reach up to 5,400 degrees Fahrenheit (3,000 degrees Celsius), melting their rocky surfaces. For example, the planet 55 Cancri e is a super-Earth more than eight times as massive as our planet that orbits its star every 18 hours at a distance of about 1.4 million miles (2.3 million kilometers), reaching surface temperatures of 4,200 F (2,300 C) on its dayside and 2,500 F (1,370 C) on its night side. As a result, its entire surface is covered by lava.

Now, a team of scientists has modeled and synthesized the various compositions of lava worlds, based on the abundance of heavy elements in these planets’ stars. (Different stars have different compositions, and planets tend to reflect the composition of their parent star.) Then, by employing thermodynamic modeling to calculate how the compositions would behave, for example, on a planet with eight times the mass of Earth, the scientists created a catalog of 16 possible rock types that could be found on such lava worlds.

“Our catalog of volcanic exoplanet surfaces provides a tool to decipher what composes these worlds,” Lisa Kaltenegger, a planetary scientist at Cornell University and a co-author of the study, said in a statement.

Next, scientists actually created samples of these rocky materials in the lab of Cornell’s Megan Holycross, a geochemist specializing in modeling Earth’s interior. Once the samples had cooled, another co-author, Cornell’s Marc-Antoine Fortin, measured the infrared reflection spectrum of each rock, which measures how much light of each infrared wavelength the rock reflects.

The scientists found that each sample had a spectral line at a wavelength of 8 microns, called the Christiansen feature, which is a previously known signature of silica-rich materials such as plagioclase, a common component of granite. The strength of this line can inform scientists which of the 16 compositional models a lava world most closely resembles.

“We are trying to understand not just exoplanets, but all rocky planets, including our own,” Fortin said. “These lava worlds are like a time machine, because Earth was once lava, too.”

The James Webb Space Telescope is observing the transit spectrum of lava planets including 55 Cancri e, Gliese 367b and K2-141b during its first year of science observations, and will likely observe many more in the future. The aim is that by matching the spectra that JWST measures with the Cornell catalog, astronomers will be able to more accurately characterize these worlds.

There may, however, by a spanner in the works. A 2020 paper from a team led by Zahra Essack, a Ph.D. student in exoplanetary sciences at MIT, found that some lava planets may have highly reflective metallic atmospheres of vaporized sodium, potassium and silica that could mask their molten surfaces. However, these planets would be quite bright, whereas lava is fairly dark, which could help scientists spot which planets are affected by the atmospheric masking.

The research was published Aug. 9 in the Monthly Notices of the Royal Astronomical Society.