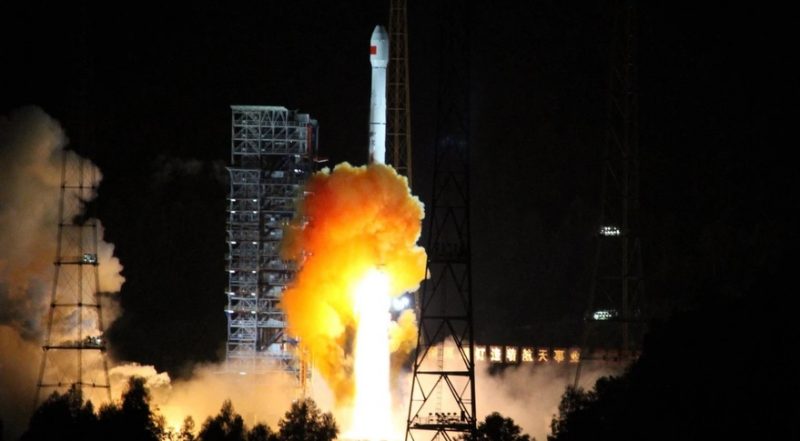 From the don’t-believe-everything-you-read department … EarthSky and many other media reported in late January 2022 that a wayward SpaceX Falcon 9 rocket would strike the moon this March 4. It will be the first known-in-advance, unintentional impact of space junk with the moon. And, yes, a rocket will strike the moon on March 4. But experts are now saying the object is not the Falcon 9 launched in 2015. Instead, they now believe it’s a Chinese Long March rocket launched in 2014. How could astronomers get it so wrong? The reason is: space is vast. Small objects like rockets are hard to track.

We reported on January 28:

On March 4, 2022, the spent upper stage of a SpaceX Falcon 9 rocket will crash into the moon. The debris has been in space since February of 2015, when it launched the Deep Space Climate Observatory into space. The Falcon 9 made a close flyby of the moon on January 5, 2022. Data from observers helped scientists pinpoint its orbit, discovering it would hit the Hertzsprung crater on the moon’s far side …

And most of this information still stands, except the identity of the rocket. The crash will still happen on March 4. It’ll still create a small crater on top of the existing Hertzsprung crater (created by flying chunks of debris from the process that made our solar system, perhaps billions of years ago).

How the story got started

The original story about the wayward rocket – which made headlines around the world, probably due to SpaceX founder Elon Musk’s high media profile – came from computational science wizard Bill Gray. He is the creator of the Guide astrometry software, which, according to the Planetary Society, is used by both professional and amateur astronomers worldwide to track near-Earth objects, asteroids, minor planets and comets.

It was engineer Jon Giorgini at NASA’s Jet Propulsion Laboratory who realized this object was not, in fact, the upper stage of a Falcon 9 rocket. He wrote to Gray [in February 2022] explaining that the DSCOVR spacecraft’s trajectory did not go particularly close to the moon. The second stage would, therefore, be extremely unlikely to strike the moon. This prompted Gray to dig back into his data and identify other potential candidates.

He soon found one: the Chinese Chang’e 5-T1 mission launched in October 2014 on a Long March 3C rocket. This lunar mission sent a small spacecraft to the moon as a precursor test for an eventual lunar-sample return mission. The launch time and lunar trajectory are almost an exact match for the orbit of the object that will hit the moon in March.

Gray wrote on his page about the event:

In a sense, this remains circumstantial evidence. But I would regard it as fairly convincing evidence. So I am persuaded that the object about to hit the moon on 2022 Mar 4 at 12:25 UTC is actually the Chang’e 5-T1 rocket stage.

How was the object misidentified?

As Bill Gray explains on his website, objects in low-Earth orbit are carefully tracked by various countries because there are so many pieces of debris with risks of collision with military and science satellites. Farther from Earth, there is less tracking. Or, as Gray said:

Generally speaking, high-altitude junk goes ignored. (Except, it appears, by me.)

Gray works with asteroid hunters. As he said:

My ‘day work’ is for the asteroid-hunting community … Most artificial objects are close to the earth and move fast enough that there is no risk of mistaking them for an asteroid. But there are about a dozen ‘high-flying’ objects that can move slowly enough to look like a rock, at least briefly. For about fifteen or twenty years now, I’ve taken these observations and computed orbits. Then, when the surveys find such objects, they can fairly quickly say ‘Never mind; it’s not a rock; it’s just another nuisance artificial object,’ and go back to looking for actual rocks.

So there aren’t many people tracking space debris that’s far from Earth. As Ed Trollope, a spacecraft engineer, said on Twitter, the debris:

is not always tracked since the moment of launch, and nothing can be tracked constantly. An object gets detected, the trajectory calculated, and worked backwards to ID where it came from. Many are unknown.

When he was asked if everything that launched should have trackers attached, he said:

How would you power this ‘tracker?’ We’re talking about bits of debris here, not functional satellites. There is a huge amount of work being done to improve our current capabilities in this area. Here’s a good starting point if you’d like to learn more.

Bottom line: Yes, a rocket will strike the moon on March 4, 2022. No, it will not be a SpaceX Falcon 9 rocket. Experts are now saying it’ll be the the Chinese Long March rocket that launched the Chang’e 5-T1 mission in October 2014.