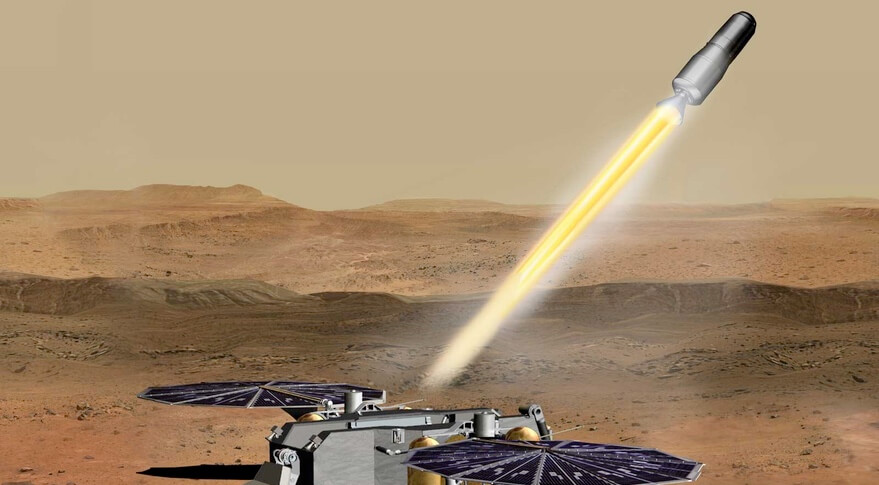 WASHINGTON — NASA has selected Lockheed Martin to build a small rocket that will transport samples collected by the Perseverance rover into orbit around Mars.

The agency said Feb. 7 it awarded a contract valued at up to $194 million to Lockheed to develop the Mars Ascent Vehicle (MAV), an essential element of the overall Mars Sample Return campaign being developed by NASA and the European Space Agency.

The MAV will be transported to Mars on a NASA-led Sample Retrieval Lander, which will also carry an ESA-developed rover. That rover will pick up samples of Martian rock and regolith cached by Perseverance and return them to the lander. Perseverance may also return some samples to the lander on its own.

Those samples will be loaded into a container on the MAV, which will then lift off and place the container in orbit around Mars. An ESA-led Earth Return Orbiter will grab the container using a NASA-provided system and return it to Earth.

The contract covers design, development, testing and evaluation of the overall MAV and its ground support equipment. Neither NASA nor Lockheed released additional technical details about the design, but NASA awarded a contract to Northrop Grumman in March 2021, valued at up to $84.5 million, to provide first- and second-stage solid-fuel motors for the MAV.

“Committing to the Mars Ascent Vehicle represents an early and concrete step to hammer out the details of this ambitious project not just to land on Mars, but to take off from it,” Thomas Zurbuchen, NASA associate administrator for science, said in a statement about the MAV award. “We are nearing the end of the conceptual phase for this Mars Sample Return mission, and the pieces are coming together to bring home the first samples from another planet.”

NASA officials provided few updates about the status of that conceptual phase of development at a meeting Feb. 2 of the Mars Exploration Program Analysis Group advisory committee that featured presentations on other current and upcoming Mars missions. Officials there said that a systems requirements review for Mars Sample Return has been pushed back to April.

That review will address strategic questions about how the campaign will be run, including schedules and key technical elements. An independent review released in November 2020 made several recommendations, such as delaying the launch of the Sample Retrieval Lander and Earth Return Orbiter from 2026 to 2028, examining whether the lander should be split into two separate landers, and using a radioisotope thermoelectric generator rather than solar power for the lander or landers.

NASA has not announced any decisions on those issues. NASA’s announcement noted the Sample Retrieval Lander is scheduled for launch no earlier than 2026. However, NASA’s Jet Propulsion Laboratory, in a Feb. 7 tweet responding to a question about Mars Sample return prompted by the MAV contract announcement, said “the tentative timeline is as early as 2028” for launching the lander, and “samples would come back in the early to mid 2030s.”