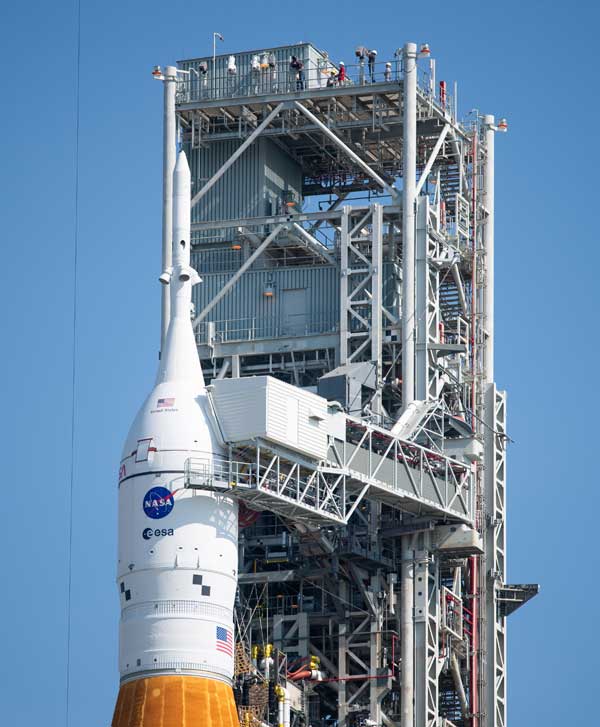 PARIS (ESA PR) — With the rocket now on the launchpad, the Artemis I Moon mission is getting real: 29 August is the first opportunity for the SLS rocket to blast off from NASA’s Kennedy Space Center’s launchpad 39B in Florida, USA.

This first Artemis mission will put NASA’s Orion spacecraft and its European Service Module to the test during a journey beyond the Moon and back. The spacecraft will enter lunar orbit, using the Moon’s gravity to gain speed and propel itself almost half a million km from Earth – farther than any human-rated spacecraft has ever travelled.

This journey will serve as a test of both the Orion spacecraft and its SLS rocket ahead of crewed flights to the Moon. In this instance, no crew will be on board Orion, and the spacecraft will be controlled by teams here on Earth. The second Artemis mission, however, will see four astronauts travel around the Moon on a flyby voyage around our natural satellite.

Mission duration depends on the launch date and even time. It will last between 20 to 40 days, depending on how many orbits of the Moon mission designers decide to make. This flexibility in mission length is necessary to allow the mission to end as intended with a splashdown during daylight hours in the Pacific Ocean, off the coast of California, USA.

Two more dates are available if weather is not ideal on 29 August. The Artemis Moon mission can also be launched on 2 September and 5 September.

Orion is the only spacecraft capable of human spaceflight outside Earth orbit and high-speed reentry from the vicinity of the Moon. More than just a crew module, Orion includes ESA’s European Service Module, the powerhouse that fuels and propels Orion.

The creation of the ESM has been a truly pan-European effort. Around 26 European companies were enlisted by ESA’s prime contractor, Airbus, to develop and build the module, which in total comprises more than 20 000 parts and components. From electrical equipment to engines, solar panels, fuel tanks and life-support elements, Europe’s world-class scientific and technological skills are at the heart of this mission.

The Artemis I mission is the first of the Artemis programme to take humans to the Moon sustainably. Aside from the ESA’s service module for the Orion missions of which four are already ready or being built with contracts in place for two more. ESA is also supplying habitation and refuelling modules for the international lunar Gateway station that will orbit our natural satellite. The building of more European Service Module’s as well as a series of independent European lunar landers are to be decided at ESA’s Ministerial Council later this year as part of ESA’s exploration strategy Terrae Novae that includes landing a European astronaut on the Moon by 2030.