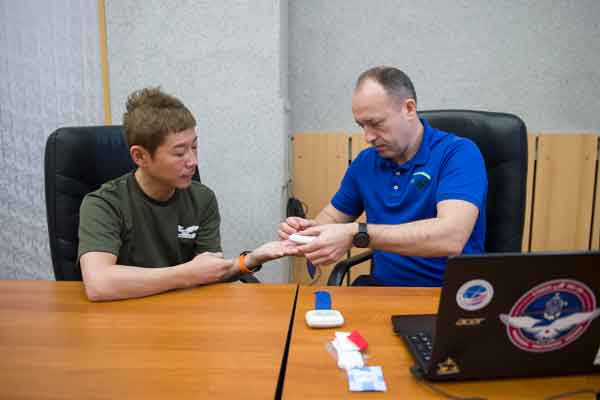 BAIKONUR COSMODROME, Kazakhstan (Rocosmos PR) — During each long half-year expedition to the International Space Station, Russian cosmonauts conduct more than fifty experiments in various scientific fields. However, for space medicine, even a short flight is a source of information for the development of means and methods for maintaining the health of crews in zero gravity.

Thus, Roscosmos cosmonaut Alexander Misurkin and space flight participants from Japan Yusaku Maezawa and Yozo Hirano, during prelaunch training at Baikonur, take part in the LAZMA medical experiment aimed at studying blood microcirculation in microgravity conditions. On December 8, the ISS Visiting Crew 20 crew will go into orbit, where they will continue the experiment. Thanks to Japanese tourists, it became possible for the first time to carry out this project on board the ISS. The flight duration will be twelve days.

“In addition to the extensive program that my colleagues from Japan have prepared for independent conduct on the ISS, they, among other things, are ready to conduct an experiment with my participation to study microcapillary blood flow,” said Alexander Misurkin during an examination session at the CTC. “The experiment was proposed by the staff of the Oryol State University named after I.S. Turgenev.”

When performing the LAZMA experiment, laser sensors are used. The set of the medical device includes two analyzers – right and left, which are installed on the upper and lower extremities, as well as on the head in the region of the temples. Thus, peripheral changes in all vessels are captured. It is important that the experiment is carried out on board correctly, in accordance with the onboard documentation. To do this, on the ground, before the flight, training is underway to perform the study, and background data of each crew member is also taken. In the future, these indicators of skin vessels will be supplemented by the results obtained in space flight and after landing.

“When an astronaut enters space, microgravity acts on him first of all,” explains the crew doctor, head of the department of the CTC, Alexander Vasin. “Under the influence of space flight factors, the blood moves to the upper half of the body, as a result of which the cosmonaut in the first days in orbit has a hoarse voice, redness of the eyes, and swelling of the face. In connection with these changes, the study of vascular blood filling under zero gravity is of great interest for space medicine. First, specialists need to understand the very process of blood flow when a person is in an unfamiliar environment. Secondly, the study of symptoms is useful for the development of preventive measures, the use of which is necessary in the first days of a person’s stay in outer space. “

The results obtained in the course of the study will further help in the development of preventive measures. Improvement of existing preventive measures is especially important for the implementation of promising flights into deep space. The elimination of unpleasant symptoms associated with circulatory disorders will allow the astronauts to avoid discomfort and maintain high performance at the station.