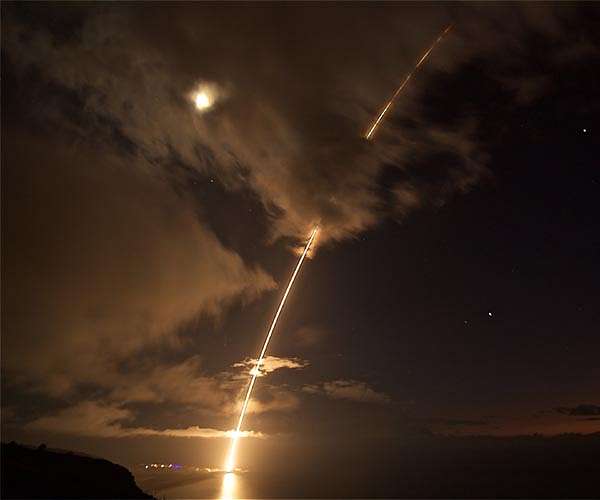 The event, designated Japan Flight Test Mission-07 (JFTM-07) was held in cooperation with the U.S. Navy.

The first live fire event demonstrated a successful engagement of a Standard Missile 3 (SM-3) Block IIA fired from the JS Maya (DDG 179) against a medium range ballistic missile T4-E target. The JS Maya tracked and fired on the target successfully destroying it over the Pacific Ocean. This is the first time a Japanese Maya-class destroyer has fired a SM-3.

“The success of this joint test marks a critical milestone in demonstrating, for the first time, a live fire of an SM-3 Blk IIA from a Japanese ship,” said MDA Director Vice Adm. Jon Hill.

“The cooperative development of the SM-3 Blk IIA by the Japanese government, U.S. government and industry team, and the integration with the Aegis Weapon System on Japan’s Ballistic Missile Defense-capable ships, is a remarkable achievement and vitally important in defending against an ever-increasing threat. I congratulate the Japan Maritime Self Defense Force, U.S. Navy, MDA team, and our industry partners on this accomplishment.”

JFTM-07 is a significant milestone in the cooperation between Japan and the U.S. in the area of missile defense. JFTM-07’s goal was to support the JMSDF ballistic missile defense modernization and certification of the Japanese Aegis Weapon System Baseline J7 and Maya class destroyer deployment.

It also demonstrates the capability of the SM-3 Block IIA, being developed cooperatively by Japan and the United States, to defeat medium- and intermediate-range ballistic missiles. The SM-3 Block IIA interceptor operates as part of the Aegis Ballistic Missile Defense system and can be launched from Aegis-equipped ships or Aegis Ashore sites.