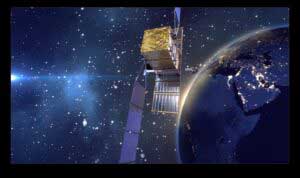 “The delays, postponing the Vega-C Maiden Flight to Q1 2022, with a consequent tight schedule of launches in 2022, made the  launch period of CSG-2 no longer compatible with the needs of the COSMO Mission. Since Arianespace backlog was already full on Soyuz and Ariane systems in 2021, it was not possible to have a European back-up solution compliant with the CSG-2 schedule, thus an alternative solution with the US provider SpaceX has been adopted allowing to keep the CSG-2 launch within the current year,” ASI said on its website.

“COSMO-SkyMed is the first Earth observation mission designed for dual purposes, both civil and military. Its first and second-generation satellites are ‘eyes’ which are capable of observing Earth from space, meter by meter, day and night, in any weather conditions, to help predict landslides and floods, coordinate relief efforts in case of earthquakes or fires, check crisis areas from uphill,” the Italian space agency said.

COSMO-SkyMed satellites are equipped with synthetic aperture radars (SARs) that operate in the X-band range, enabling them to image the Earth’s surface through clouds and without sunlight. ASI and Italy’s Ministry of Defense developed the spacecraft.

ASI sought to reassure its European partners that the decision to launch the CSG-2 satellite aboard a SpaceX rocket was not part of a trend.

“In line with its long-lasting support ensured to the European launch industry, ASI confirmed its trust in Arianespace and Vega-C capabilities by contracting the launch of the CSG-3 satellite, planned for 2024. Moreover, other future launch opportunities for ASI missions with Vega-C are under discussion, confirming Arianespace as a key partner for the Agency,” ASI said.

Vega-C is an upgraded variant of the Vega booster that will be capable of placing payloads weighing up to 2,200 kg into a 700 km polar orbit. The Vega rocket can place 1,430 kg into the same orbit.

Vega’s launch schedule has been disrupted by two failures over the past two years. In July 2019, the Falcon Eye 1 reconnaissance satellite was lost when a Vega rocket failed. The accident was attributed to a thermal protection design flaw on the second stage’s forward dome area.

In November 2020, another Vega rocket failed due to an assembly error involved inverted control cable in the rocket’s AVUM upper stage. The resulting deviation in the stage’s trajectory destroyed Spain’s SEOSat-Ingenio Earth observation satellite and France’s TARANIS spacecraft, which was designed to study Earth’s atmosphere.

Vega has a record of 17 successes and two failures since its maiden flight in February 2012.