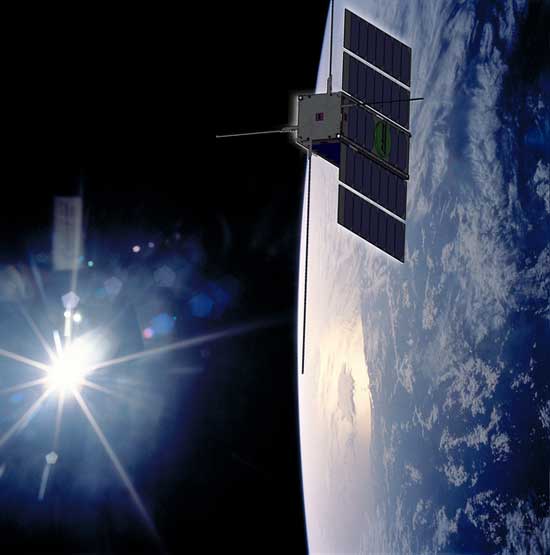 PARIS (ESA PR) — ESA’s OPS-SAT is a Swiss army knife in orbit. The 30-cm CubeSat packs a powerful onboard computer and an array of instruments that make it the ideal laboratory for testing innovative new technologies in space.

Thanks to the ESA Discovery programme, 12 new experiments will be doing just that, as they develop software, concepts and protocols that push the robust CubeSat to its limits and that could one day be essential parts of future spacecraft missions.

The OPS-SAT Space Lab is ESA’s only spacecraft open to innovation for anyone in Europe and enables new and exciting ideas to be tested live in space without the risk of damaging a multi-million-Euro satellite. Last summer, ESA’s Discovery programme issued a call for ideas for European industry and academia to apply to win funding and fly their experiments on a flight computer more powerful than any ESA has launched before.

“We were overwhelmed by the quality of the proposals we received,” says OPS-SAT spacecraft manager David Evans. “Our first task was to assess them on their innovativeness, with many more than we expected passing with flying colours. That made it really tricky to narrow them down.”

55 proposals in total were submitted through ESA’s Open Space Innovation Platform (OSIP). 12 have now been awarded funding. The experiment ideas covered a wide range of ESA’s activities: telecommunications, spacecraft operations, Earth observation, technology development and more, to the excitement of many across ESA.

“I am really impressed by the diversity of ideas people came up with for experiments that could be flown on OPS-SAT,” adds David. “Particularly those using artificial intelligence. AI is a broad term for an effectively infinite toolbox, and it was great to see concrete applications using a variety of tools from across the field. It’s clear to me that when we give academia and industry access to such a powerful processor on a satellite, there is no end to the creative things they’ll think to do with it.”

More than the sum of their parts

With its call for ideas for OPS-SAT experiments, ESA was looking for innovative proposals that would benefit from the opportunity to demonstrate their concept in orbit on an active spacecraft. Proven experience in space and the investment of ESA funding are important steps for a concept’s development and can help further legitimise it in the view of other potential stakeholders.

“The return on investment for all parties is improved when ESA shows its willingness to invest in these ideas,” says David. “It’s impressive what European industry produced with some initial seed funding. It has helped unlock further resources for industrial innovation by instilling confidence in the ideas.”

For many experimenters seeking to build confidence in the potential commercial applications of their work, OPS-SAT is a unique opportunity. As there are multiple different teams carrying out many different experiments on board the CubeSat at once, some experimenters can offer their experiments as services to others to the benefit of all.

OPS-SAT experimenters designing flexible artificial intelligence algorithms for handling image data or designing generic ways to compress telemetry data, for example, can offer their own experiments as services to other teams that need to analyse images or send lots of data down to Earth. In doing so, the users don’t have to reinvent existing applications and can focus on their experiments, while the service providers gain initial experience with feedback from end users representative of their potential future customers.

One of the areas ESA was particularly interested in receiving ideas was on the potential uses of OPS-SAT’s Field Programmable Gate Arrays (FPGAs).

Not long ago, updating the software on a spacecraft after launch was a nail-biting affair. What if something went wrong while the spacecraft was rebooting? What if something didn’t reboot correctly? While a spacecraft operator might still let out an audible sigh of relief after a software update today, they are a powerful and necessary tool for getting the most out of a satellite throughout its lifetime and for recovering a spacecraft experiencing issues.

Now, reconfiguring hardware in flight is the new frontier. Spacecraft hardware is directly controlled by a layer of simple software known as firmware – more similar to the software in the integrated chip in your refrigerator than that running your web browser right now.

Altering this firmware after launch is still risky business. But technologies like OPS-SAT’s FPGAs open up new possibilities for reconfiguring satellite hardware in flight in a safe and controlled manner. This is one of the next big areas of opportunity for innovation in spacecraft operations and OPS-SAT offers a unique test-bed for the experimental approaches today that may become important routine tools tomorrow.

OSIP provides a flexible platform that helps ESA discover novel ideas and invest in unconventional activities to support the advancement of the European space industry. The platform brings together exciting ideas from companies and institutions in Europe with ESA experts like David Evans to take them to the next level.

“I was really impressed with how OSIP helped us reach new audiences and increase the awareness of OPS-SAT in academic and industrial communities in Europe,” says David. “As a result, we have a good number of new faces who are running their first experiments on OPS-SAT under this campaign. We are very excited to see how they’ll approach it.”