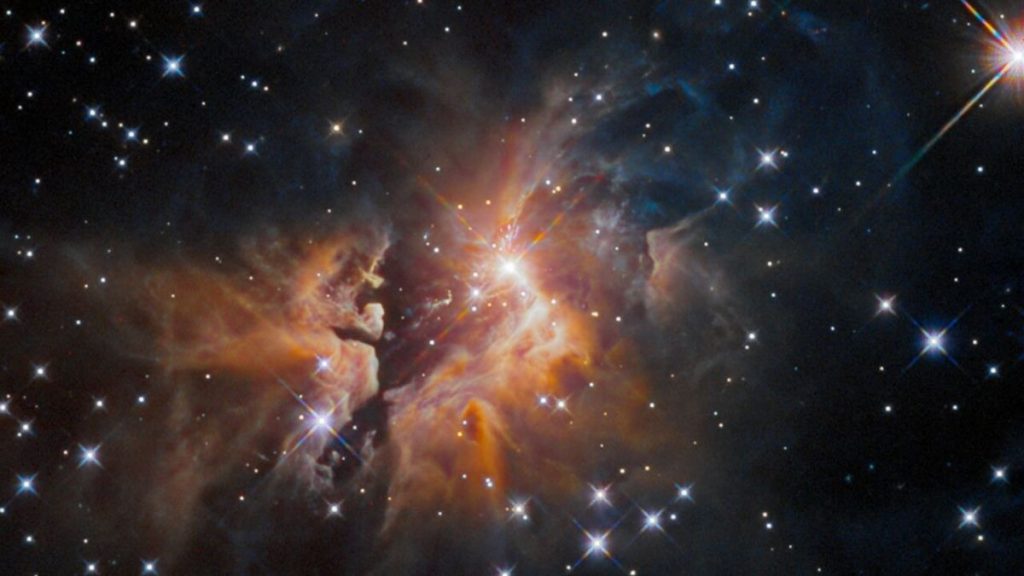 Warm-colored clouds surround the young star at the center of a recently published image from the Hubble Space Telescope. These clouds may look peaceful, but scientists have learned this region is actually hectic.

These cosmic features are part of a stellar shroud called IRAS 05506+2414. On Sept. 19, the European Space Agency (ESA) published the image with a description of the wild and enigmatic environment. ESA collaborates with NASA to run the Hubble Space Telescope, and both agencies benefit enormously from the iconic observatory. In the case of this young star, Hubble helped to acquire a foundational piece of information about this object.

According to ESA, astronomers used Hubble’s sensitive Wide Field Camera 3 to narrow down the stellar juvenile’s location in space: more than 9,000 light-years away, in the constellation Taurus.

Researchers wanted to determine a more precise distance for the object because, according to ESA, “astronomers cannot tell how far from Earth the star actually is from a single observation.” But with a more precise distance in hand, astronomers can ascertain other details, like the brightness of the star, how much energy it emits, and its mass. All of this information helps astronomers take educated guesses about the origin of the young star’s unusual outflow.

The material gushes out as a peculiar “fan-like spray” from the center of this image at velocities as high as 220 miles per second (350 kilometers per second), ESA officials wrote in the image description.

Because IRAS 05506+2414 is an outlier, it can help astronomers build a robust understanding of the earliest chapters in the lives of young stars.