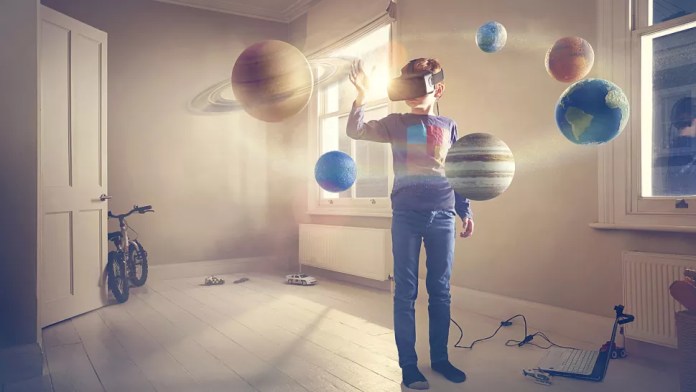 Want to know how to set up your room for VR? Donning a virtual reality headset and finding yourself in an otherworldly digital space is a mind-blowing experience. But, unless you set up your VR play space properly, the immersive magic of using devices like the Oculus Quest 2 or Valve Index can quickly be lost. No one wants to trip over a cable while blasting extra-terrestrials, or crash through their TVs while swinging a VR lightsaber at Darth Vader.

Preparation is key. While most of the best VR headsets are user-friendly enough to have up and running soon after taking them out of the box, the physical nature of many of the best experiences means you have to approach them differently than if you’re sitting down for a regular console or PC gaming session.

Whether you’re stepping out onto an alien planet from the comfort of your living room, or firing up the engines of a space freighter at your computer desk, these tips will help make sure you get the most out of your VR play space comfortably and, most importantly, safely.

When you’re using a wireless headset like the Oculus Quest 2 or a “tethered”, PC-only wired VR headset like the HTC VIVE Pro 3, you’re likely going to spend most your time with the headset either at a computer desk, or in a room with as much space as possible, such as your living room.

Though a park or a garden may be the most spacious area available to you, VR headset manufacturers encourage you to stay inside when playing with their devices. Tracking can be adversely affected by bright sunlight, and uneven flooring can be dangerous. Not to mention the danger a stray pooch can pose.

Whichever area you settle down into, your games and experiences will fall into one of three categories:

How to set up your desk for virtual reality

While all virtual reality headsets will have slightly different set-up requirements, some basic tenets apply to setting up play space environments for each of them.

For the most part, whether you’re sitting or standing, setting up a VR space in front of your desk is pretty simple. We’re going to be assuming that you’re using PC VR experiences here, with your computer nearby. In this case, you’re going to need ready access to your keyboard and mouse, as well as your monitor to fire up the initial VR environments that your headset manufacturer uses.

Depending on your VR title of choice, you may also need your headset’s wireless motion controllers, or a gamepad – the standard wireless Xbox Series X/S pad is our recommended option for VR play (though note you’ll also need the Xbox Controller Wireless Adapter to use it cable-free).

Even if seated, you’ll undoubtedly move around a lot during VR play – the nature of the technology encourages it. You’ll want a bit of clearance between yourself and your computer desk, so you won’t bash your knees off your rig or table. Even if your VR system is set-up specifically for seated play, you’ll want to make sure you can outstretch your arms in all directions without hitting something, especially if you’re on a swivel chair that’s going to offer 360-degree spins. The same applies if you’re using a standing set up; you may just be standing in one spot, but you’ll likely be spinning around and moving your arms above your head, so make sure you’re not near any low-hanging lighting fixtures.

Remember that all good VR headsets will have some sort of ‘Guardian’ system, too. These are like digital walls or cages which show you the boundaries of your play space. If you get too close, they’ll appear, warning you that you’re approaching the edges of your play space and the furniture that may be around it.

Consider investing in some accessories to make your desk-based VR experience a little tidier. Stands and mounts for VR headsets are readily available (like this one from Delamu), letting you leave your headset out for easy access. If you’re using an Oculus Quest 2 VR headset, you can also purchase a Logitech K830 keyboard, which the headset can recognize even within VR, letting you type away clearly with the headset still on.

Also, try to make sure you’re playing in a well-lit room – this lets any tracking cameras or stations associated with your headset see you and your movements well, and will ensure there’s no lag or jerkiness between what you do and how that translates in the game.

How to prepare a room for room-scale VR

Room-scale play is the ultimate VR experience. There’s nothing quite like walking around your favorite game worlds freely, without being bound to a couch or hiding behind a controller. But room-scale is the most demanding of VR play styles, not only in terms of the stresses on your VR hardware, but also in the space requirements needed, and physical exertion required. You are, after all, going to be up on your feet, moving around your room.

Whereas with standing or seated play you’re stuck in one spot, room-scale lets you move around freely, making setting up the Guardian space parameters all the more important. To do this, when prompted by your headset’s set-up system, you’ll need to point your VR controller at the floor and ‘draw’ the extremities of your play space. This helps your headset know where your boundaries are by aiming your controllers towards the floor and pushing a trigger button to point out any room edges, walls, or obstacles.

Most modern equipment lets you do this whilst wearing the VR headset by showing a video feed of your room on the internal screens via cameras mounted on the outside of the unit. Again, you’re going to want to consider any overhead obstacles, like lights, as well as warning those around you to stay out of the play space – you could easily bump into them while immersed in the VR experience.

If you’re using a headset that makes use of external tracking stations (sometimes called base stations), like the HTC VIVE series or Valve Index, remember that you’ll want those units above head height in the two opposite corners of your play space, pointing slightly down towards the middle of that area. Your headset’s set-up software will ensure that you don’t encounter any blind spots within that area.

Setting up tracking base stations like this can be time consuming, so consider finding a permanent place for them, even if you disconnect the cabling. There are many accessory sellers offering brackets for wall mounting base stations, while you may even want to consider purchasing a tall tripod if there isn’t already an easily accessible tall spot in your play space.

If you’re really committed to living the VR dream, you may even consider setting up a dedicated VR room somewhere in your home if space allows. You’d have no disturbances or furniture to move, and could invest in extension cables for tethered headsets, and even ceiling-mounted cable tidies to ensure you’re never tangled up in a trailing lead.

Those using an Oculus Quest 2 headset should also take a look at the Anker charging dock. It uses magnetic, wireless charging connectors to keep your controllers and headset always fully charged and ready to play, whenever you feel like grabbing it.