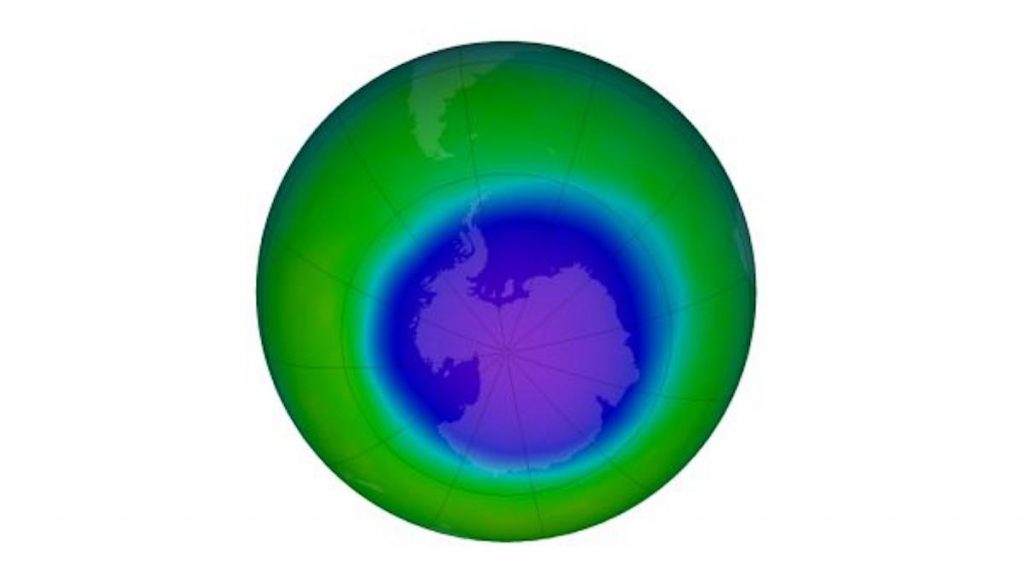 The ozone hole that forms yearly over Antarctica has grown for the third year in a row.

At nearly 10 million square miles (26.4 million square kilometers), the ozone hole (opens in new tab) is the largest it’s been since 2015. But despite that growth, scientists say that the hole’s size is still on a downward trend overall. “All the data says that ozone is on the mend,” Paul Newman, NASA Goddard Space Flight Center‘s chief Earth scientist, told the Associated Press (opens in new tab).

The ozone hole was first observed in the early 1980s (opens in new tab) and reached its largest extent in 2006 (opens in new tab), according to NASA. This year’s ozone hole, which peaked on Oct. 5, was the biggest recorded since 2015. But scientists aren’t too concerned. “The overall trend is improvement. It’s a little worse this year because it was a little colder this year,” Newman told the Associated Press.

Related: See how the huge ozone hole over Antarctica has grown in 2021 in this NASA video

Ozone is composed of three oxygen atoms and makes up very little of our atmosphere, but it has a huge impact on our planet. The blanket-like layer stretching over the globe absorbs the most harmful ultraviolet (UV) radiation from the sun, shielding life on Earth. Ozone forms in the stratosphere, around 9 to 18 miles (14.5 to 29 kilometers) above Earth’s surface. It forms when UV radiation splits regular oxygen molecules, which are made of two oxygen atoms (O2); the two free-floating oxygen atoms then each bond with an oxygen molecule, forming a molecule made of three oxygen atoms.

— Air pollution from reentering megaconstellation satellites could cause ozone hole 2.0

Scientists discovered the thinning ozone layer over Antarctica in the early 1980s. Although ozone is created and destroyed naturally in the stratosphere, human-driven pollution destroys ozone faster than it can form. In particular, technologies that use chlorine or bromine, like refrigeration and air conditioning, destroy ozone at alarmingly high rates. In the stratosphere, chlorine molecules react with ozone to create one chlorine monoxide molecule (composed of a chlorine atom and an oxygen atom) and one O2 molecule. That chlorine monoxide molecule then breaks down, freeing that chlorine atom to react with more ozone. According to the Environmental Protection Agency, one atom of chlorine can destroy 100,000 ozone molecules (opens in new tab) before that chlorine molecule is removed from the atmosphere.

Substances like chlorofluorocarbons, used in refrigeration and air conditioning, stay in the atmosphere for a long time — some for longer than six months — meaning the chlorine and other chemicals from these substances can wreak havoc on the ozone layer.

A cold stratosphere is exactly what chemicals like chlorine need to break down ozone. During Antarctica’s winter, the stratosphere gets cold enough for clouds to form. The ice crystals that make up those clouds provide a surface on which chlorine, for instance, can react with ozone. As spring approaches in September, the sun’s UV rays jumpstart these reactions. Once summer is in full swing, the stratosphere warms up enough to evaporate the clouds, removing the surface on which ozone-destroying chemical reactions take place.

Global agreements like the Montreal Protocol (opens in new tab), which regulates the production and consumption of ozone-depleting substances, have helped to repair the ozone hole. And despite the ozone hole’s increasing size this year, scientists generally agree that the hole is shrinking.

Earlier this year the National Oceanic and Atmospheric Administration reported that ozone-depleting substances in the atmosphere have decreased by 50% (opens in new tab) since 1980. The report also noted that if this downward trend continues, the ozone layer could be fully repaired by 2070.