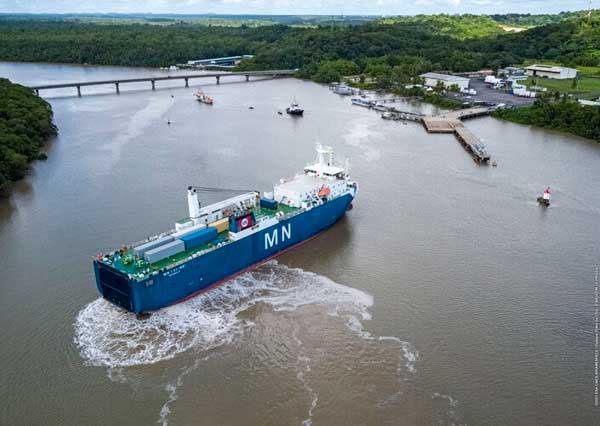 KOUROU, French Guiana (ESA PR) — The James Webb Space Telescope has arrived safely at Pariacabo harbour in French Guiana. ESA in close collaboration with NASA will now prepare this once in a generation mission for its launch on Ariane 5 from Europe’s Spaceport this December.

Few space science missions have been as eagerly anticipated as the James Webb Space Telescope (Webb). As the next great space science observatory following Hubble, Webb is designed to resolve unanswered questions about the Universe and see farther into our origins: from the formation of stars and planets to the birth of the first galaxies in the early Universe.

Every launch requires meticulous planning and preparation. For Webb, this process began about 15 years ago. Its arrival at Pariacabo harbour is a major milestone in the Ariane 5 launch campaign.

Webb arrived from California on board the MN Colibri which sailed the Panama Canal to French Guiana. The shallow Kourou river was specially dredged to ensure a clear passage and the vessel followed high tide to safely reach port.

Though the telescope weighs only six tonnes, it is more than 10.5 m high and almost 4.5 m wide when folded. It was shipped in its folded position in a 30 m long container which, with auxiliary equipment, weighs more than 70 tonnes. This is such an exceptional mission that a heavy articulated vehicle was brought on board MN Colibri to carefully transport Webb to the Spaceport.

The Spaceport’s preparation facilities are ready for Webb’s arrival. As extra protection from contamination, the clean rooms are fitted with additional walls of air filters and a dedicated curtain will shroud Webb after it is mounted on the rocket.

This launch campaign involves more than 100 specialists. Teams will work separately to prepare the telescope and the launch vehicle until they become one combined team to join the telescope with its rocket for a momentous liftoff.

When Webb arrives at the Spaceport, it will be unpacked inside a dedicated spacecraft preparation facility where it will be examined to ensure that it is undamaged from its voyage and in good working order.

In parallel to Webb preparations, Ariane 5 rocket parts from Europe will come together in the launch vehicle integration building.

Ariane 5 is well suited for science satellites with proven capability to send missions to the second Lagrange Point (L2). Ariane 5 will release Webb directly on a path towards L2 on which it will continue for four weeks, eventually arriving at L2 which is four times farther away than the Moon is from Earth.

A few customised features make Ariane 5 a perfect fit for Webb. These include the adaptation of venting ports at the base of the fairing which will be forced fully open during the flight. The fairing – the rocket’s nose cone – will protect Webb from the acoustics at liftoff and during its journey through Earth’s atmosphere. Its venting ports will enable extremely smooth depressurisation of the fairing from ground pressure to vacuum during the flight.

Then, to avoid overheating of any elements of Webb, Ariane 5 will perform a specially developed rolling manoeuvre to ensure that all parts of the satellite will be equally exposed to the sun.

An extra battery will provide power for a boost to the upper stage after release of the telescope, safely distancing it from Webb.

Arianespace operates a family of rockets at Europe’s Spaceport: Ariane 5, Vega and Soyuz. This launch site is surrounded by jungle and covers 690 km2. It is an ideal location for launching rockets for several reasons.

First, at only 5 degrees north of the equator, the rockets launched here can benefit from the ‘slingshot effect’ due to the speed of Earth’s rotation, increasing their performance as they already travel at over 300 m/s when they lift off. Also, an open ocean towards the east and north offers a large range of possible launch trajectories away from populated areas.

Finally, this region has a very low risk of cyclones or earthquakes which is important when such delicate operations are taking place.

“Webb is an excellent example of international teamwork and cooperation. We welcome Webb and our partners to Europe’s Spaceport in French Guiana to continue this adventure towards a thrilling liftoff on board Ariane 5 and to sharing the many Webb science breakthroughs to come!” commented Daniel Neuenschwander, ESA Director of Space Transportation.

Working with partners, ESA was responsible for the development and qualification of Ariane 5 adaptations for the Webb mission and for the procurement of the launch service.