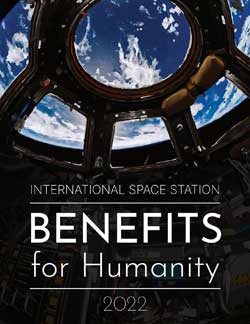 Over more than two decades, the International Space Station has evolved into an advanced microgravity laboratory for human space operations and science. The space station offers researchers worldwide the opportunity to utilize the unique environmental conditions of LEO, supporting hundreds of experiments across every major scientific field at any given time. With over 20 years of research and 3,300 experiments hosted aboard the station, now more than ever discoveries and developments are taking shape. The station’s ability to foster research has aided in the growing commercial space economy allowing new players to enter the space marketplace and launching flourishing businesses back on Earth.

“This edition focuses on new areas of scientific study that are resulting from the last two decades of ISS research, future technologies for the exploration of the Moon and Mars, lifesaving discoveries, and the companies and economic benefits enabled by this research.” said Dr. Kirt Costello, chief scientist for the space station at NASA’s Johnson Space Center in Houston.

Some of the benefits featured in this edition include how:

In addition to the print publication, this year’s release includes videos, podcasts, and digital features that dive deeper into some of the issue’s stories.

“The research done on the International Space Station advances scientific understanding of our planet, improves human health, develops cutting-edge technologies, and inspires and educates the leaders of tomorrow through its successful international partnerships; a truly exciting mission and part of a legacy that will be felt for decades to come,” said Costello.