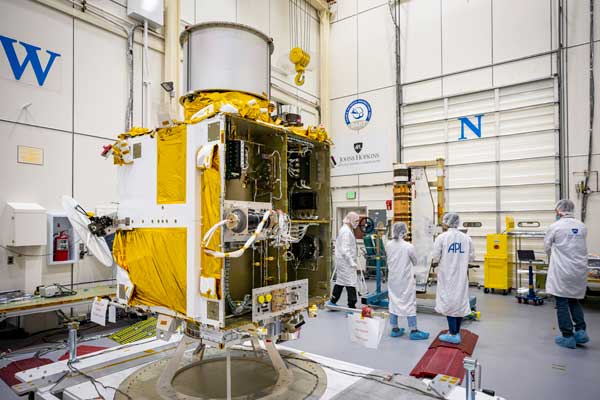 LAUREL, Md. (NASA PR) — Perched atop a stand in the middle of a high-ceilinged clean room, DART is beginning to look like the intrepid spacecraft that will aim itself directly into an asteroid next fall. With the addition of its compact Roll-Out Solar Arrays (ROSA)​ coiled into two gold cylinders that flank the sides of the spacecraft, and its less visible but still integral​ imager, the Didymos Reconnaissance and Asteroid Camera for Optical (DRACO) navigation tucked safely beneath its panels, the spacecraft is close to fully integrated.

This mix of current and new technologies, some of which it will demonstrate for the first time, will see DART through its 10​-month journey toward its asteroid target.

NASA’s DART, the Double Asteroid Redirection Test, is a carefully planned demonstration that will help determine if kinetic impactor technology—flying a spacecraft directly into a small Solar System body at speeds of about 15,000 miles per hour with the intention of changing its course—can serve as a reliable method of asteroid deflection in the event that such a hazard ever heads for the Earth. NASA is constantly monitoring the skies and has already identified nearly 40% of potentially hazardous asteroids larger than 140 meters (459 feet) in size, none of which are slated to impact our planet, including the binary system selected for this first-ever deflection test.​

But to prove that our planet can expect the unexpected, the DART mission will set out to push an asteroid and safely change its motion in space. For the last two years, the spacecraft destined for this undertaking has been developed and built at the Johns Hopkins Applied Physics Laboratory (APL) in Laurel, Maryland. APL, which leads the mission for NASA, is now putting the finishing touches on the spacecraft.

The recently installed ROSA and DRACO are two critical technologies that will enable the spacecraft to navigate through space and reach the Didymos asteroid system. The flexible and rollable modular “wings” are lighter, more compact and stiffer than traditional solar arrays despite their size; in space, each array will slowly unfurl to reach 28 feet in length—about the size of a bus. The technology was first successfully tested in 2017 on the International Space Station (ISS), and newer versions were installed this past June for full-time use on the ISS. DART will be the first spacecraft to fly the new arrays, paving the way for their use on future missions. Redwire developed the technology at their Goleta, California facility and delivered ROSA to APL in May and worked closely with the APL team in the following weeks to carefully install them onto the spacecraft.

And while DRACO is not entirely “new” (it was inspired by the New Horizons LORRI camera), this upgraded imager will be the sole instrument onboard the spacecraft. Combined with the autonomous navigation software SMART Nav (Small-body Maneuvering Autonomous Real-Time Navigation), it will play the key role in helping DART navigate through space and identify the correct asteroid to aim itself toward.

The flexible and rollable “wings” are lighter and more compact than traditional solar arrays despite their size; in space, each array will slowly unfurl to reach 28 feet in length, about the size of a bus. (Credits: NASA/Johns Hopkins APL/Ed Whitman)

“Traditional navigation tec​hniques would only get DART somewhere within about 9 miles of the target asteroid,” said APL’s Zach Fletcher, DRACO lead engineer.​ “To achieve our mission objectives, we need to remove the rest of that error via on-board optical navigation. DRACO starts supplying images to DART’s on-board autonomous navigation system more than 50,000 miles from its target, four hours before the impact and is key to DART achieving a kinetic impact on Dimorphos.”

The images DRACO returns of the target asteroid Dimorphos, including the last-second glimpse of its own impact site on the asteroid, will be crucial toward analyzing the results of the DART test and understanding how the asteroid was affected.

DART has been through its paces in the last several months, enduring a battery of environmental testing and analysis as the final pieces of the craft started coming together. Likewise, the SMART Nav software has seen its fair share of testing so the team can confidently relinquish the reins on DART in the final hours before it collides into Dimorphos. With DRACO and ROSA on board, the DART spacecraft completed vibration testing in late July to ensure that all of its hardware is secure and ready for the rigors of launch.

The Light Italian CubeSat for Imaging of Asteroids, or LICIACube, contributed by the Italian Space Agency, will be one of the final components to hitch a ride on DART before it is delivered to the launch site this October​. LICIACube will deploy roughly five days prior to the DART impact and capture images of the spacecraft’s final moments, the resulting ejecta plume, and the back side of the asteroid that DRACO will never see.

“DART is the result of  years of work by a dedicated team and partners who have overcome unique challenges to accomplish firsts in both technology development and planetary defense,” said ​DART mechanical engineer Betsy Congdon, who led the team during the installation. “With the successful installation and testing of two critical technologies, DRACO and ROSA, we’re very confident that DART is ready to complete its final system testing and reviews before shipping to the launch site.”

This November, the spacecraft will launch on a SpaceX Falcon 9 rocket from Vandenberg Space Force Base near Lompoc, California.​ In the fall of 2022, DART will have its sights set for Dimorphos, the smaller moonlet orbiting the larger Didymos asteroid. Its collision with Dimorphos will change the speed of the moonlet’s orbit around the main body by several minutes. And despite being approximately 6.8 million miles away from Earth at the time of impact, the asteroid system will be visible to ground-based telescopes, which scientists will use to determine the exact change in the orbital period.

To learn more about the DART mission, visit: