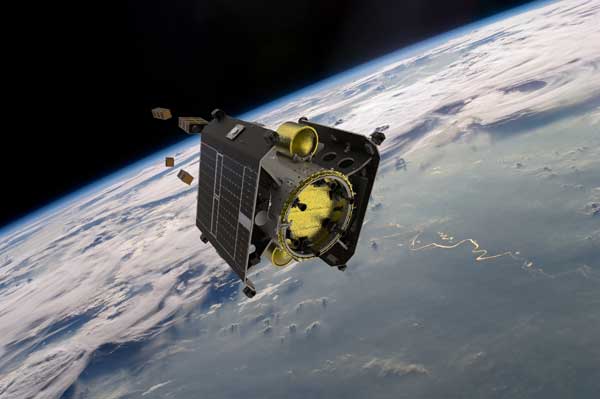 FINO MORNASCO, Italy (D-Orbit PR) — D-Orbit, the space logistics and transportation company, announced that it has successfully completed the deployment phase of its WILD RIDE mission. As part of this phase, D-Orbit’s ION Satellite Carrier (ION), the company’s proprietary space transportation vehicle, successfully deployed all six satellites hosted onboard and will now proceed with the in-orbit demonstration of 12 hosted payloads.

The WILD RIDE mission began on June 30th, 2021, with the launch of ION SCV 003 aboard a SpaceX Falcon 9 launch vehicle from the Space Launch Complex 40 (SLC-40) at Cape Canaveral, Florida. During the deployment phase, which was completed on July 24th, ION Satellite Carrier released small satellites from the Spanish Elecnor Deimos, the Bulgarian EnduroSat, and the Kuwaiti Orbital Space. Also on board, under contract with ISILAUNCH and integrated into a QuadPack from Dutch satellite manufacturer ISISPACE, were Finnish Reaktor Space Lab, Marshall Intech Technology from UAE, and the Royal Thai Airforce. Each satellite was deployed into a custom orbital slot.

“It’s always exciting to complete the deployment phase,” said Renato Panesi, CCO of DOrbit. “This is our third mission in nine months, and each of these missions has been characterized by a growing level of complexity which, I’m very proud to say, the team has handled flawlessly. Less than a year ago we proved the concept of precision deployment in space and now this extremely complex operation has almost become routine for us.”

WILD RIDE is the third flight of ION Satellite Carrier, the orbital transportation vehicle designed, manufactured, and operated by D-Orbit to ferry a batch of satellites in space and deploy each one individually into its own customized orbit, and carry out operations on third-party payloads.

“This is another great achievement, another step towards our vision for a space logistic infrastructure enabling the full potential of the space economy. Imagine how many new space businesses could take shape if there were no boundaries, no fixed locations in space, or time constraints. Imagine how the entire space ecosystem could grow faster if innovative and disruptive technology could be tested in space in a fraction of the time,” said Luca Rossettini, CEO of D-Orbit. “Well, now stop imagining: this is already a reality. Our orbital infrastructure is at the service of both the Space-to-Earth and Space-to-Space visionary companies to build, together, the largest market ever.”

The vehicle used in this mission features an innovative plug-and-play system for hosted payloads already tested in the previous mission. D-Orbit is now preparing for the in-orbit demonstration phase of the mission, which will feature the testing of LaserCube, an optical communication device from the Italian-based company Stellar Project, and of Nebula, an on demand, on-orbit cloud computing and data storage service that is at the core of D-Orbit’s upcoming advanced services. During this phase, a range of innovative applications will be demonstrated using sophisticated, artificial intelligence/machine learning (AI/ML) techniques.

D-Orbit’s next orbital transportation mission with ION, the fourth in 15 months, is scheduled for December 2021.

D-Orbit is a market leader in the space logistics and transportation services industry with a track record of space-proven technologies and successful missions.

Founded in 2011, before the dawn of the New Space market, D-Orbit is the first company addressing the logistics needs of the space market. ION Satellite Carrier, for example, is a space vehicle that can transport satellites in orbit and release them individually into distinct orbital slots, reducing the time from launch to operations by up to 85% and the launch costs of an entire satellite constellation by up to 40%. ION can also accommodate multiple third-party payloads like innovative technologies developed by startups, experiments from research entities, and instruments from traditional space companies requiring a test in orbit. The company successfully delivered 63 commercial payloads into space while developing advanced products and services for the needs of tomorrow.

D-Orbit is a space infrastructure pioneer with offices in Italy, Portugal, UK, and the US; its commitment to pursuing business models that are profitable, friendly for the environment, and socially beneficial, led to D-Orbit becoming the first certified B-Corp space company in the world.