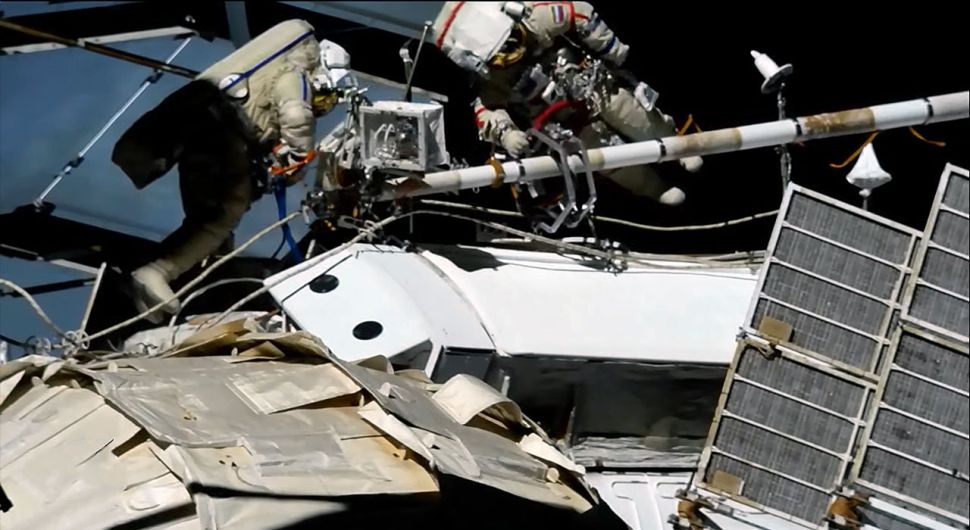 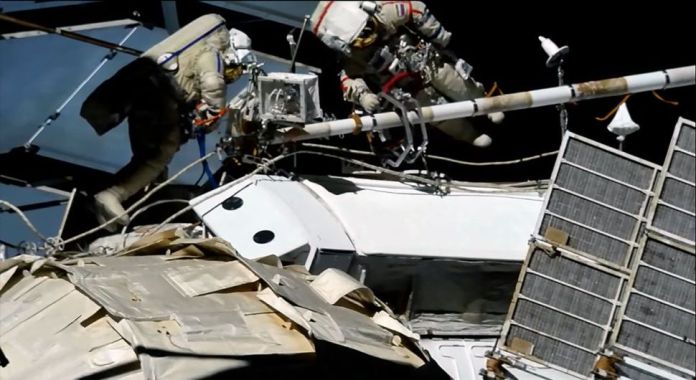 Two cosmonauts completed the first in a series of spacewalks needed to outfit a newly-added Russian module to the International Space Station.

Novitskiy and Dubrov began the seven-hour, 54-minute spacewalk at 10:41 a.m. EDT (1441 GMT) by opening the hatch on the Poisk mini-research module located adjacent to the Nauka module on the Russian segment of the space station. After gathering their tools, the cosmonauts deployed the Strela telescoping boom, a 46-foot-long (14 meters) manually operated crane that they used to traverse the station’s Russian modules.

Retrieving two bundles of four cables each, the spacewalkers connected the U.S. operating segment’s power supply to a patch panel on Nauka and to an interface panel on the Zarya functional cargo block. The cosmonauts ran into some difficulty removing protective end caps from some of the cables but were able to get all of them freed and the cables plugged in.

The eight cables tied Nauka into the U.S. solar panel-fed system that provides electricity for the entire space station. Electrical checks conducted after the cables were in place showed a good connection and power flowing as expected.

Novitskiy and Dubrov also began the routing of an ethernet cable to Nauka and partially installed a new handrail to ease future spacewalks.

Launched on July 21 and autonomously docked to the space station eight days later, the Nauka module will provide an expanded area to conduct science, as well as serve as a docking port and airlock for Russian spacewalks. The MLM will also house additional crew quarters and a toilet for the space station’s residents.

Running slightly behind schedule as a result of the extra work needed to free the cable caps, Novitskiy and Dubrov were instructed by Moscow Mission Control to defer installing two handrails and three biological science experiments to a later spacewalk. Novitskiy and Dubrov wrapped their work by stowing the Strela boom.

Friday’s spacewalk was the second for both Novitskiy and Dubrov, who previously performed their first extravehicular activity (EVA) together in June. The two are scheduled to work outside the space station again to continue the outfitting of Nauka on Thursday (Sept. 9).

This was the 242nd EVA in support of International Space Station assembly, maintenance and upgrades and the 10th spacewalk outside the outpost in 2021.