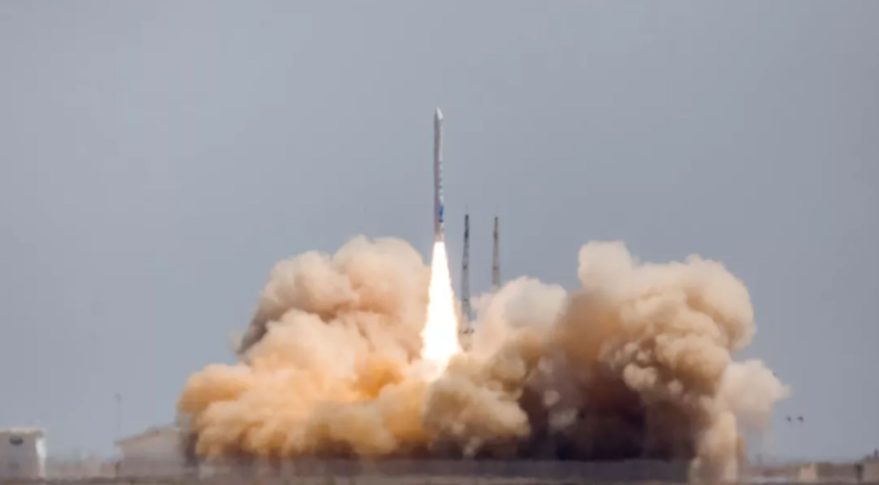 The fourth Hyperbola-1, a four-stage solid rocket, lifted off from the Jiuquan Satellite Launch Center in the Gobi Desert at 3:09 a.m. Eastern May 13.

Apparent launch footage appeared on a Chinese social media site shortly after launch but a period of silence followed, extending well past the time at which a similar launch could have been declared successful.

The failure was confirmed by Chinese state media Xinhua four hours after launch. Teams are investigating the specific  reasons for the failure.

The mission was the 16th orbital launch attempt from China in 2022. It was the first launch not relying on a Long March rocket and the first failure.

The loss of what was expected to be a new remote sensing satellite for a commercial satellite developer and operator will be a blow to iSpace’s plans.

Beijing-based iSpace became the first Chinese company from outside of the state-owned, traditional space sector to successfully launch a satellite into orbit in July 2019. The firm suffered two subsequent failures in February and August of last year however.

The company is also developing the much more complex Hyperbola-2, a larger, methane-liquid oxygen launcher with a reusable first stage. It secured $173 million in funding in August 2020 to boost its development.

Vertical takeoff, vertical landing (VTVL) tests had been planned for 2021 following progress with testing of the methalox engines and software, grid fins and landing leg deployment, but updates have been sparse in recent months.

The Hyperbola-2 will likely use the same new launch infrastructure recently constructed at Jiuquan to facilitate the Zhuque-2, another methalox launcher developed by rival Landspace. That rocket could make its first launch attempt in the near future.

Landspace and iSpace will face competition in liquid and reusable launch services from rivals including Galactic Energy, Deep Blue Aerospace, Space Pioneer and the reemergent Linkspace.

Hyperbola-1 is one of a wave of new Chinese light-lift solid launchers to boost the country’s overall space capabilities, but the record is patchy so far.

While the China Aerospace Science and Technology Corporation (CASC), the country’s main space contractor, successfully operates the Long March 11 from inland sites and a sea platform, Kuaizhou-1A and Kuaizhou-11 rockets developed by the China Aerospace Science and Industry Corporation (CASIC) and its affiliates remain grounded after failures in 2021 and 2020 respectively.

Landspace dropped its plans to operate the Zhuque-1 solid rocket after its single launch and failure in 2018, while OneSpace has not attempted another orbital launch since its sole attempt in 2019.

Galactic Energy, established after the early commercial movers noted above, has succeeded with both launches of its Ceres-1 rocket and plans a third around July. CAS Space, spun off from the Chinese Academy of Sciences (CAS), is preparing for its first mission, using the ZK-1A designed to carry up to 2 metric tons of payload to LEO, which would be China’s largest solid rocket when it lifts off in June or July. CASC spinoff China Rocket has launched one Jielong-1 (“Smart Dragon”) rocket and plans to launch the larger Jielong-3 in the second half of the year.

China’s government has sought to foster commercial space ecosystems beyond the state sector dominated by CASC through incentives, policy support and a military-civil fusion technology transfer national strategy. The moves are seen as a response to the earlier rise of commercial space activities in the U.S. in the shape of SpaceX and others. The latest failure adds pressure onto upcoming launches to deliver success.

A policy shift in 2014 opened up portions of the space sector to private capital, with large funding rounds now becoming increasingly common.

Policy frameworks, support for new infrastructures including “satellite internet” and cities and other areas seeking to attract innovative, high-end technology space firms to boost growth have supported the emergence and growth of hundreds of space-related companies in areas around launch, satellite and downstream applications, and seen the formation of a number of space industry clusters and pilot zones in China.

Earlier reporting indicates that China sees a role for such companies in establishing a low Earth orbit communications megaconstellation and performing commercial missions to and from the Tiangong Chinese space station.

CASC and affiliates of its sister defense giant CASIC have recently unveiled small satellite mass manufacturing capabilities, with a capacity for producing hundreds of satellites per year.

For now though China will be looking to see which of the range of new launch service provider hopefuls can deliver reliability.