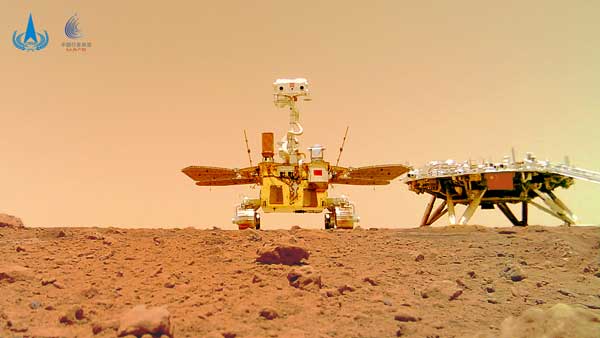 The administration announced on Tuesday that the 1.85-meter-tall robot, which is now hundreds of millions of kilometers from Earth, will continue carrying out an extended expedition toward an ancient coastal area of Utopia Planitia, a large plain within the largest known impact basin in the solar system.

The 240-kilogram robot is the core component of the Tianwen 1 mission, the country’s first interplanetary adventure, and is also the sixth rover on Mars, following five others launched by the United States.

Tianwen 1, named after an ancient Chinese poem, traveled more than 470 million km and carried out several trajectory maneuvers before entering Mars’ orbit on Feb 10. Zhurong touched down on the planet on May 15 and separated from its landing platform a week later.

By now, Zhurong has obtained about 10 GB of primary data and has moved about 900 meters.

According to Sun Zezhou, head designer of the Tianwen 1 probe, the rover will suspend its operations from mid-September to late-October due to the anticipated disruption of its communications with Earth caused by solar electromagnetic radiation, and will then resume its mission.

Zhurong’s success has marked the completion of all of Tianwen 1’s mission objectives-orbiting Mars for comprehensive observation, landing on the planet and deploying a rover to conduct scientific operations – also making Tianwen 1 the first Mars expedition to accomplish all three goals with one probe.

Tianwen 1 is the latest example of China’s rapidly expanding presence in outer space, following a string of recent accomplishments that include putting the first section of the country’s permanent space station into orbit, returning the first lunar samples to Earth in more than four decades and completing a global navigation satellite network.