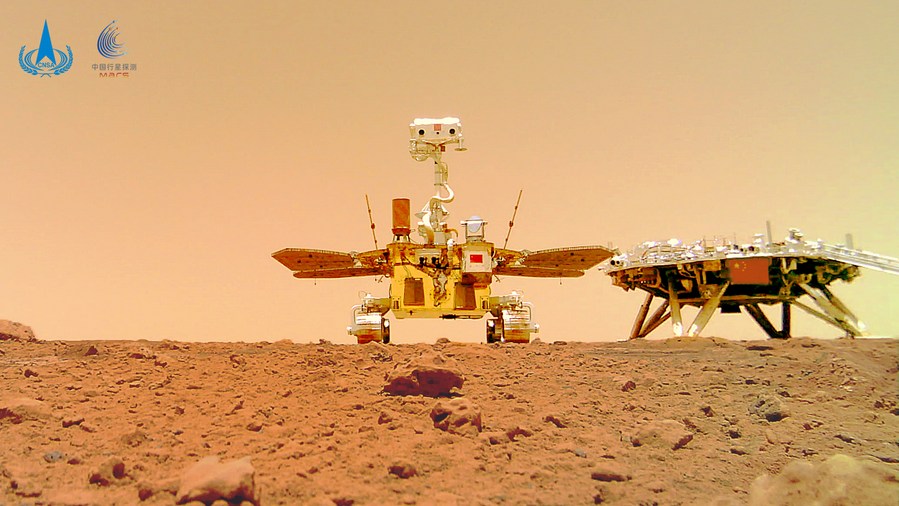 The Chinese Tianwen-1 lander and Zhurong rover are being watched, both from Mars’ orbit and from the surface! The Chinese Space Agency today released a series of photos, including a family portrait of the rover and lander taken by a wireless remote camera. And just look at that cute rover face!

Zhurong placed a remote camera about 10 meters (33 feet) from the landing platform, then was driven back to the lander for a group portrait, the CNSA said.

China landed the Tianwen-1 lander and rover on the Martian plain called Utopia Planitia on May 14, 2021 after it spent about three months orbiting the Red Planet. Other pictures released by CNSA included panoramic views of the lander, the surrounding area, and also another panoramic view of the rover and lander together from the rover’s mast camera.

But NASA’s Mars Reconnaissance Orbiter and HiRISE camera also captured a stunning view this week from orbit of China’s mission on the planet’s surface.

“HiRISE acquired this image on 6 June 2021,” wrote HiRISE principal investigator Alfred McEwen on the HiRISE website. “Clearly visible are what we interpret as the lander surrounded by a blast pattern, and the rover itself a bit to the south after it descended from the lander.”

McEwen added that the image shows the surrounding terrain to be very typical of southern Utopia Planitia, with a smooth and mostly boulder-free region. The bright curving features are aeolian (windblown) landforms.

The rover’s picture shows the view of the surrounding plain as well.

While the CSNA said the pictures from the surface shows the mission to be a “complete success,” there is some science happening, too. The rover Zhurong has been working on the surface of Mars “to detect the environment, move around the surface, and carry out scientific exploration.”  CNSA said all the scientific equipment aboard the rover has been turned on, and the “orbiter operates in a relay orbit with a cycle of 8.2 hours, providing relay communication for the scientific exploration of the Mars rover.”

The rover Zhurong is named after the god of fire in ancient Chinese mythology.

The post China’s Mars Rover, Seen From Orbit … and From the Surface! appeared first on Universe Today.