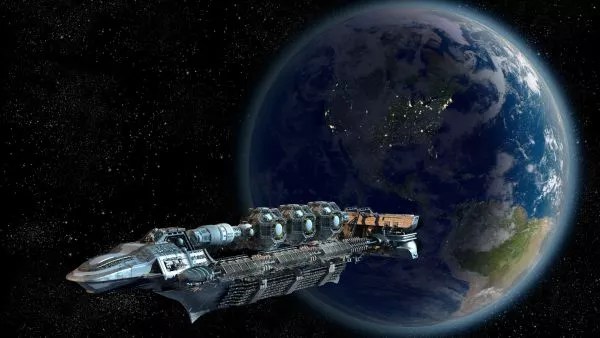 China is investigating how to build ultra-large spacecraft that are up to 0.6 mile (1 kilometer) long. But how feasible is the idea, and what would be the use of such a massive spacecraft?

The project is part of a wider call for research proposals from the National Natural Science Foundation of China, a funding agency managed by the country’s Ministry of Science and Technology. A research outline posted on the foundation’s website described such enormous spaceships as “major strategic aerospace equipment for the future use of space resources, exploration of the mysteries of the universe, and long-term living in orbit.”

The foundation wants scientists to conduct research into new, lightweight design methods that could limit the amount of construction material that has to be lofted into orbit, and new techniques for safely assembling such massive structures in space. If funded, the feasibility study would run for five years and have a budget of 15 million yuan ($2.3 million).

The project might sound like science fiction, but former NASA chief technologist Mason Peck said the idea isn’t entirely off the wall, and the challenge is more a question of engineering than fundamental science.

“I think it’s entirely feasible,” Peck, now a professor of aerospace engineering at Cornell University, told Live Science. “I would describe the problems here not as insurmountable impediments, but rather problems of scale.”

By far the biggest challenge would be the price tag, noted Peck, due to the huge cost of launching objects and materials into space. The International Space Station (ISS), which is only 361 feet (110 meters) wide at its widest point according to NASA, cost roughly $100 billion to build, Peck said, so constructing something 10 times larger would strain even the most generous national space budget.

Much depends on what kind of structure the Chinese plan to build, though. The ISS is packed with equipment and is designed to accommodate humans, which significantly increases its mass. “If we’re talking about something that is simply long and not also heavy then it’s a different story,” Peck said.

Building techniques could also reduce the cost of getting a behemoth spaceship into space. The conventional approach would be to build components on Earth and then assemble them like Legos in orbit, said Peck, but 3D-printing technology could potentially turn compact raw materials into structural components of much larger dimensions in space.

An even more attractive option would be to source raw materials from the moon, which has low gravity compared with Earth, meaning that launching materials from its surface into space would be much easier, according to Peck. Still, that first requires launch infrastructure on the moon and is therefore not an option in the short term.

A structure of such massive proportions will also face unique problems. Whenever a spacecraft is subjected to forces, whether from maneuvering in orbit or docking with another vehicle, the motion imparts energy to the spaceship’s structure that causes it to vibrate and bend, Peck explained. With such a large structure, these vibrations will take a long time to subside so it’s likely the spacecraft will require shock absorbers or active control to counteract those vibrations, he said.

Designers will also have to make careful trade-offs when deciding what altitude the spacecraft should orbit at, Peck said. At lower altitudes, drag from the outer atmosphere slows vehicles down, requiring them to constantly boost themselves back into a stable orbit. This is already an issue for the ISS, Peck noted, but for a much larger structure, which has more drag acting on it and would require more fuel to boost back into place, it would be a major concern.

On the flip side, launching to higher altitudes is much more expensive, and radiation levels increase quickly the further from Earth’s atmosphere an object gets, which will be a problem if the spacecraft houses humans.

But while building such a structure might be technically possible, it’s not feasible in any practical sense, said Michael Lembeck, a professor of aerospace engineering at the University of Illinois at Urbana-Champaign who has worked on both government and commercial space programs.

“It’s kind of like us talking about building the Starship Enterprise,” he told Live Science. “It’s fantastical, not feasible, and fun to think about, but not very realistic for our level of technology,” given the cost, he said.

Given the research project’s tiny budget, it is likely only meant to be a small, academic study to map out the very earliest contours of such a project and identify technological gaps, Lembeck said. For comparison, the budget to build a capsule to take astronauts to the ISS was $3 billion. “So the level of effort here is extremely small compared to the outcomes that are desired,” he added.

There are also questions about what such a big spacecraft would be used for. Lembeck said possibilities include space manufacturing facilities that take advantage of microgravity and abundant solar power to build high-value products like semiconductors and optical equipment, or long-term habitats for off-world living. But both would entail enormous maintenance costs.

“The space station is a $3 billion a year enterprise,” Lembeck added. “Multiply that for larger facilities and it quickly becomes a rather large, expensive enterprise to pull off.”

China has also expressed interest in building enormous solar power arrays in orbit and beaming the power back to Earth via microwave beams, but Peck said the economics of such a project just don’t stack up. Peck has done some back-of-the-envelope calculations and estimates it would cost around $1,000 per watt, compared with just $2 per watt for energy generated from solar panels on Earth.

Perhaps the most promising application for such a large space structure would be scientific, Peck said. A space telescope of that scale could potentially see features on the surface of planets in other solar systems. “That could be transformative for our understanding of extrasolar planets and potentially life in the universe,” he added.