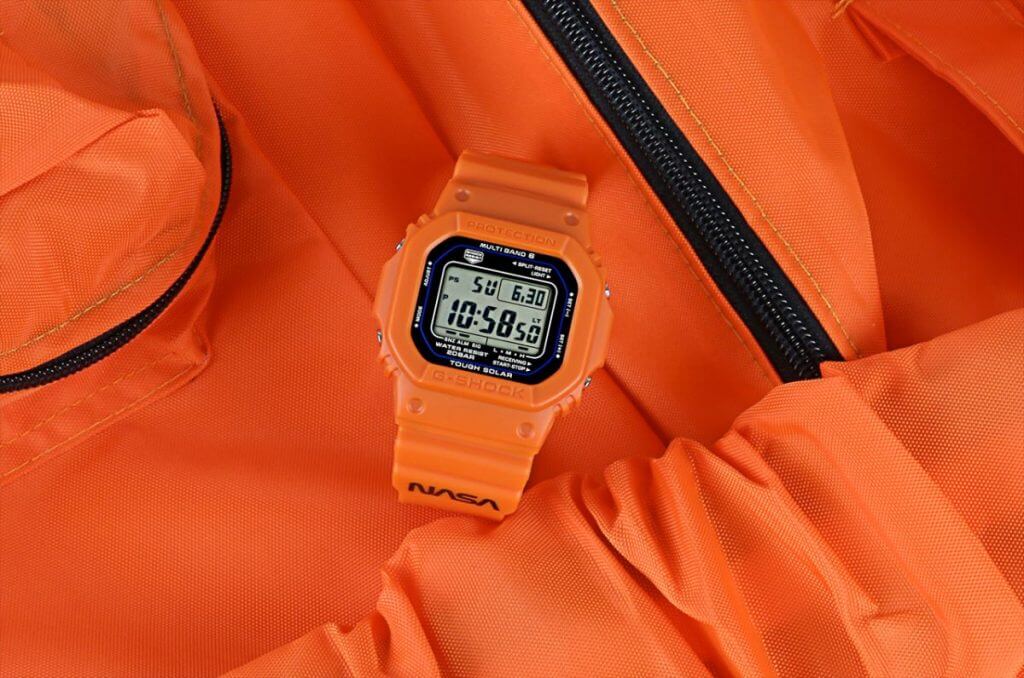 A new, limited edition wristwatch takes it cue — or rather, hue — from the bright color of the launch and entry suits worn by NASA astronauts.

Casio’s latest NASA-inspired digital watch (opens in new tab) shares the same square-face look of its other G-Shock models, but with an international orange body and strap.

“Styled after the iconic orange suits worn by astronauts, the new model mirrors this famous aesthetic with an all-orange case and band with an American flag adorning a black band loop,” reads Casio’s description of the GWM5610NASA4 G-Shock (opens in new tab). “This latest model, which celebrates space exploration, comes with advanced technical capabilities.”

First introduced in 1988 in the wake of the space shuttle Challenger tragedy, NASA’s Launch Entry Suit (LES) featured an international orange-color outer layer in case the wearer had to bail out into the ocean. The bright color was meant to help rescue teams locate crew members in the water.

Affectionately known as the “pumpkin suit,” the LES was replaced in 1994 by the similarly-colored Advanced Crew Escape Suit (ACES), which was used through the end of the space shuttle program. Now, the ACES has evolved into the Orion Crew Survival System (opens in new tab) (OCSS). Still bright orange, the new pressure suit will be worn by astronauts while launching and returning to Earth aboard NASA’s Orion spacecraft (opens in new tab) on Artemis moon missions.

“Along with the eye-catching pop of color, the model also includes the NASA insignia on the lower band and an engraving of an astronaut on the case back,” Casio’s description reads. “Additionally, the watch dial intertwines black, white and blue colorways against a positive LCD.”

Among the technology incorporated into the watch is a solar panel (“Tough Solar”) that converts not only sunlight, but light from weak sources such as fluorescent lamps, into power, and Casio’s “Multi-Band 6” atomic timekeeping, which provides automatic time correction through terrestrial radio wave reception.

The $170 timepiece comes packaged in a tin and box also styled after the orange astronaut pressure suits.

The Casio G-Shock has its own history with the U.S. space program, being among the wristwatches that NASA approved for use on the space shuttle and aboard the International Space Station. Crew members could wear any personal timepieces they desired, but for official purposes, they were limited to a choice between the G-Shock, Timex Ironman and Omega Speedmaster, among a few other watches.

“One of the most popular timepieces in the space shuttle era was the durable Casio G-Shock (gravitational shock) wristwatch with stopwatch feature and countdown timer,” the Smithsonian National Air and Space Museum explains on its website (opens in new tab), describing a NASA-used G-Shock on display in its “Moving Beyond Earth” gallery. “Often worn by athletes and military personnel, it holds up to rugged wear and tear.”

The flown-in-space G-Shock watches were typically black and gray in color, but shared the same general form factor and modes as the GWM5610NASA4. The new orange model is the third NASA-themed limited G-Shock. The first model, the all-white DW5600NASA20 (opens in new tab), was released in 2020. The second, the black and white DW5600NASA21-1 (opens in new tab), was introduced in April 2021 to commemorate the 40th anniversary of NASA’s first space shuttle launch.