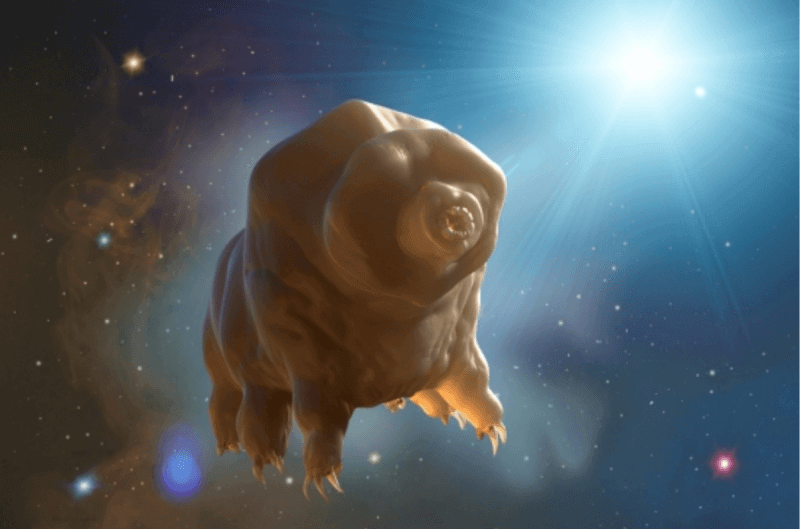 Send life to the nearest star?

The first voyagers among the stars might not be people. Instead, they might be tiny creatures such as tardigrades (aka water bears). Or they might be nematodes (aka roundworms), such as C. elegans. These little creatures might sail aboard tiny wafer-like ships powered by lasers. That’s the thinking of a team of scientists that published a paper on these topics in the January 2022 issue of the peer-reviewed journal Acta Astronautica.

The scientists want to know … What would it take to send life to the nearest star?

Proxima Centauri is the nearest star to Earth. But in the vastness of the cosmos, near is a relative term. Proxima lies about 4.22 light-years away, with each light-year equaling about 6 trillion miles (9 trillion km). Scientists have already found two planets orbiting Proxima Centauri.

Philip Lubin, of the University of California at Santa Barbara, is one of the new study’s co-authors. He works in what is called experimental cosmology, which is the idea of using the whole universe as a sort of laboratory to test ideas in physics. And he leads the Starlight project at UC Santa Barbara, which is funded by NASA. The Starlight program is part of NASA’s interest in studying large-scale directed energy to propel small spacecraft to relativistic speeds. The ultimate goal is making possible humanity’s first interstellar missions. This program was started in 2009 with initial funding from UC Santa Barbara and the NASA Spacegrant Consortium with funding from NASA Innovative Advanced Concepts. NASA calls the effort DEEP-IN (Directed Energy Propulsion for Interstellar Exploration) and DEIS (Directed Energy Interstellar Studies); read more about DEEP-IN from NASA here.

So Lubin focuses on the technology needed to accomplish a trip to Proxima Centauri within a human lifetime. Consider the Voyager 1 spacecraft, which has been traveling for 44 years and is now some 14 billion miles (22 billion kilometers) from the sun and outside of our solar system. It’s still only 21 light-hours distant, in contrast to Proxima’s distance of more than 4 light-years. Using Voyager 1 technology, it would take us 80,000 years to travel to Proxima Centauri.

That’s where lasers and wafers come in

Lubin’s team at UC Santa Barbara probes the technological possibility of sending small space probes to Proxima Centauri, propelled by light. Putting human space travel aside for the moment, think about what would be needed to transport living creatures great distances across space. Think of using creatures that are small, and hardy. These scientists envision miniature space travelers and spacecrafts. The small space probes they describe in their study would get their push from a laser array on Earth or the moon that propels them to 20% to 30% the speed of light. That’s 20-30% of a speed of 186,000 miles (300,000 km) per second. Lubin said:

“This has never been done before, to push macroscopic objects at speeds approaching the speed of light. It would probably look like a semiconductor wafer with an edge to protect it from the radiation and dust bombardment as it goes through the interstellar medium. It would probably be the size of your hand to start with.”

At these speeds – roughly 100 million miles (161 million kilometers) per hour – their proposed wafercraft could reach Proxima Centauri in about 20 years, they say.

Nematodes, or roundworms, such as C. elegans, are ideal choices for an interstellar flight. C. elegans can go into suspended animation, a useful trick for surviving a long flight. And the creatures are no stranger to space travel. They’ve already taken numerous trips on the space shuttle and to the space station.

Joel Rothman, also of University of California at Santa Barbara, is another co-author of the new paper. Rothman has studied C. elegans for decades. He explained their benefit for space travel:

“We can ask how well they remember trained behavior when they’re flying away from their earthly origin at near the speed of light, and examine their metabolism, physiology, neurological function, reproduction and aging.”

Rothman also explained his motivation for joining this effort:

“I think it’s our destiny to keep exploring. Look at the history of the human species. We explore at smaller and smaller levels down to subatomic levels and we also explore at increasingly larger scales. Such drive toward ceaseless exploration lies at the core of who we are as a species.”

Just as dogs and monkeys paved the way for humans to travel into space, so might studying nematodes and tardigrades in interstellar space help us learn how humans can achieve the same feat. Rothman said:

“We could start thinking about the design of interstellar transporters, whatever they may be, in a way that could ameliorate the issues that are detected in these diminutive animals.”

Other scientists involved in this study included a radiation specialist and a science-trained theologian.

They considered the idea that the creatures who would first venture across the space among the stars – to a planet around Proxima Centauri – wouldn’t ever land there and set up camp. Their role would be to take a one-way trip, and thereby determine its feasibility. The creatures would either burn up at entry to the planet’s atmosphere or crash land. And nothing from Proxima Centauri would be making the return trip to Earth, thereby avoiding issues of cross-contamination between a planet in the Proxima system and our own Earth. Rothman said:

“I think if you started talking about directed propagation of life, which is sometimes called panspermia — this idea that life came from elsewhere and ended up on the Earth by comets and other debris, or even intentionally from another civilization — the idea that we would purposefully send out life does bring up big questions.”

At this stage, the researchers are still just pondering the questions without answers. Some of the other questions the researchers are considering are: What are the ethics of sending humans to the stars, knowing they may never come home? And what about sending out small microorganisms or human DNA?

Tough questions. But as Rothman pointed out:

“I think we shouldn’t, and won’t, suppress the exploratory yearning that is intrinsic to our nature.”

Bottom line: A team of researchers studied the idea of sending life to the nearest star. They explored the possibility of small creatures riding a wafercraft to Proxima Centauri.