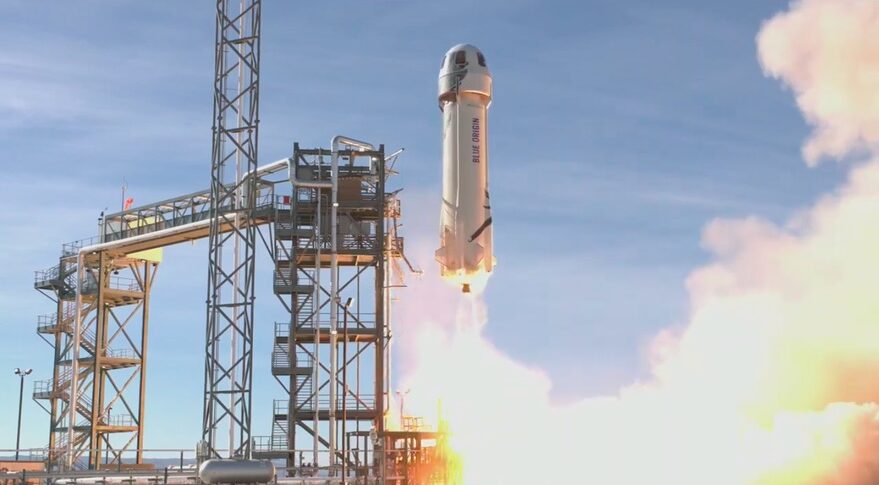 SANTA FE, N.M. — Blue Origin will conduct its next New Shepard suborbital mission Aug. 25 with a set of research payloads, but not people, on board on the vehicle’s first flight under a revised launch license.

Blue Origin said Aug. 18 that it’s scheduled the NS-17 mission from its West Texas test site, called Launch Site One, for 9:35 a.m. Eastern Aug. 25. The flight will be the eighth for this vehicle, which is different from the one that carried the company’s first people to space on a July 20 launch.

This mission will carry 18 research payloads inside the capsule, 11 of which are supported by NASA through its Flight Opportunities program. An additional NASA experiment will collect data during the powered landing of the booster to test a sensor and computer system designed for future lunar landers. The spacecraft will also carry paintings by Ghanaian artist Amoako Boafo on the parachute covers of the capsule as part of an art project by Uplift Aerospace.

The flight will be the first for New Shepard since that July 20 crewed flight. At the time, company officials said they planned to do two more crewed New Shepard launches this year, as well as a payload-only flight.

It will also be the first since the latest update to the company’s launch license, issued by the Federal Aviation Administration Aug. 13. The license is primarily a renewal of previous ones issued by the FAA’s Office of Commercial Space Transportation dating back to 2017, with the new one valid for two years.

A major change in the new license is in its “financial responsibility” requirements. Licensees must demonstrate that they are able to cover losses in the event of an accident up to a maximum probable loss, or MPL, determined by the FAA in the licensing process. In the case of New Shepard, that MPL figure is $150 million.

Launch companies usually meet this requirement though liability insurance. However, a new section of the Blue Origin license sets up an alternative approach where an unnamed “parent guarantor” places the funding in an account exclusively intended to cover any losses. The agreement between Blue Origin and that parent guarantor “shall guarantee all necessary and required resources for compliance with FAA’s financial responsibility requirements, specifically in the amount of the MPL,” the license states.

The license includes other provisions requiring that the company demonstrate that the funding is in place before each launch and that, before the first launch, provide a legal opinion from an independent law firm that the guarantee agreement is binding and enforceable.

Blue Origin did not answer questions about why it took this alternative approach in its new license. One industry source, speaking on background, said it would allow Blue Origin to avoid paying premiums for the liability insurance that would otherwise be needed to meet the requirement. Those premiums would have grown as the FAA increased the MPL value on the license from $75 million to $150 million in July, when the agency modified the license to allow Blue Origin to carry people on the vehicle.

Most companies opt not to self-insure because of the requirement to set aside a significant amount of money to cover losses. Blue Origin, though, is owned by Jeff Bezos, one of the world’s wealthiest people with a net worth of nearly $200 billion.