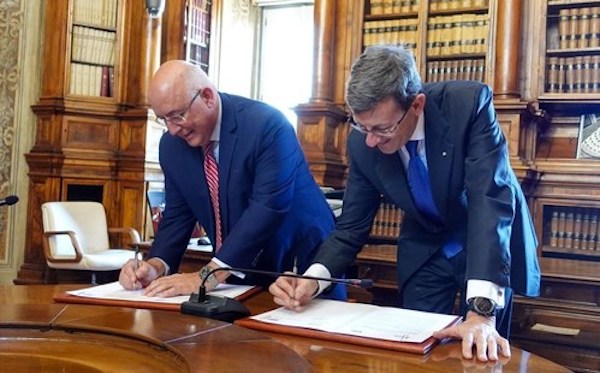 HOUSTON (Axiom Space PR) — Axiom Space, a leader in human spaceflight currently building the world’s first commercial space station, has signed a memorandum of understanding (MOU) with the Italian government to further their existing collaboration, including the potential for the development of space infrastructure integrated with the future Axiom Station. The agreement was signed by the President and CEO of Axiom Space, Michael Suffredini, and Italy’s Minister for Technological Innovation and Digital Transition, Vittorio Colao, on 19 May in Rome, Italy.

While the MOU is exploratory in nature, areas of cooperation outlined in the agreement include mutual definition of potential user requirements as well as technological solutions and operational concepts for an Italian module that could later be developed and integrated into the Axiom Space Station. The project could take the form of a public-private framework with the governance and business models developed over time.  Other areas of cooperation include collaborative development and implementation of research supporting space exploration and technology, including advanced materials, pharmaceuticals, on-orbit manufacturing, space security, aerospace medicine, simulation and robotics, and other areas of mutual interest as determined by the two parties, as well as training and mission operations.

The MOU – a first-of-its-kind approach between the Italian government and a private international corporation – is the latest effort between Italy and the Houston-based Axiom Space. Earlier this year, Axiom announced Italian Air Force (ItAF) Colonel Walter Villadei as the company’s first international professional astronaut. He is currently in training in Houston. Col. Villadei has been selected by Axiom as a backup on the Ax-2 mission, and an initial agreement has been signed for a reservation on a mission targeting late 2023. Based on ItAF’s significant competencies in the field of astronautics, modeling and simulation, and aerospace medicine, such a mission will allow the implementation of multidisciplinary scientific and technological experiments from the Italian research and industrial community and will further strengthen the relationship being established under the MOU just signed.

Together, these agreements between Axiom and Italy demonstrate the promise and viability of business to government (B2G) relationships that can help grow and expand the commercial space economy across multiple industries and market sectors. A Joint Working Group, composed of representatives from Axiom and institutions and industrial representatives appointed by the Italian Government, will pursue the implementation of the MOU.

“As one of the first European countries invested in the International Space Station, this agreement with the Italian government will bring an experienced partner to Axiom Station, helping to open a new paradigm as we build this next generation microgravity platform in low Earth orbit”, said Michael Suffredini. “The MOU is a significant addition to Axiom Space’s long-standing relationship with Italy and reflects our shared commitment to expand global access to space and grow the LEO economy while advancing science and technology to benefit all of humanity.”

Axiom Station will provide the international community with a modern, efficient, and cost-effective space infrastructure that enables microgravity research, further technological developments, and operations to continue seamlessly after the ISS end of life. The collaboration between Axiom and Italy will harness microgravity for the development of advanced scientific research, innovative technologies, on-orbit manufacturing, and space exploration.

“The agreement intends to deepen cooperation for the development and implementation of projects in the aerospace sector…[it represents] the enrichment of the excellent and historical bilateral relations between the United States and Italy, with cooperation also in the field of commercial space flight seen as an opportunity to develop a new chapter of the human presence around the Earth and on the Moon for the benefit of the whole humanity”, according to a statement released by the Italian government.

The agreement with Italy adds to Axiom Space’s list of recent accomplishments in its efforts to grow the commercial space industry. Earlier this month, Axiom Space celebrated the groundbreaking at the company’s new, long-term headquarters at Houston Spaceport, which will be home to the development and construction of Axiom Station. Axiom Space also recently welcomed home the Axiom Mission 1 (Ax-1) crew after successfully completing the first all-private astronaut mission to the ISS. The company has also signed agreements with several nations, including Hungary and the United Arab Emirates (UAE) to fly on future space missions.

About Axiom Space
Axiom Space is guided by the vision of a thriving home in space that benefits every human, everywhere. The leading provider of human spaceflight services and developer of human-rated space infrastructure, Axiom operates end-to-end missions to the International Space Station today while privately building its successor, Axiom Station, the first permanent commercial destination in Earth’s orbit that will sustain human growth off the planet and bring untold benefits back home. 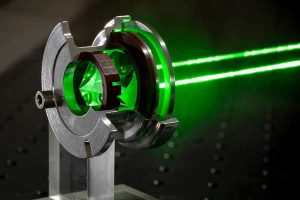 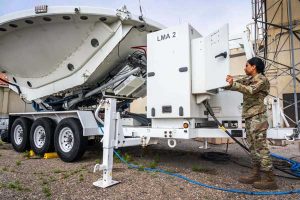 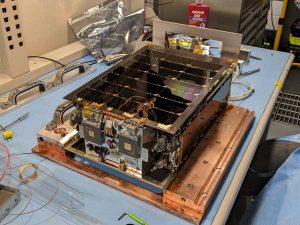