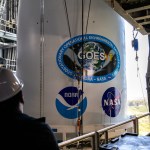 A powerful Earth-observation satellite will launch to orbit today (March 1), and you can watch the action live.

The GOES-T weather satellite is scheduled to lift off atop a United Launch Alliance Atlas V rocket from Florida’s Cape Canaveral Space Force Station today during a two-hour window that opens at 4:38 p.m. EST (2138 GMT).

You can watch the launch live here at Space.com courtesy of NASA, or directly via the space agency. Coverage will begin at 4 p.m. EST (2100 GMT).

NASA’s Launch Services Program is managing the liftoff of GOES-T, but the satellite will be operated by the U.S. National Oceanic and Atmospheric Administration (NOAA) once it’s aloft.

GOES-T is the third spacecraft in the Geostationary Operational Environmental Satellites (GOES)-R Series, which NOAA officials describe as “the Western Hemisphere’s most sophisticated weather-observing and environmental-monitoring system.”

“The GOES-R Series provides advanced imagery and atmospheric measurements, real-time mapping of lightning activity and monitoring of space weather,” NOAA officials wrote in a description of the program.Click here for more Space.com videos…New GOES-T satellite will detect wildfires in Western US

GOES-T is destined for geostationary orbit, about 22,300 miles (35,900 kilometers) above Earth’s surface. Once it gets there, the satellite will be renamed GOES-18. After mission managers finish checking out GOES-18’s systems and scientific instruments, it will enter service as GOES-West, replacing the GOES-17 satellite in that role. GOES-17 will become an orbiting spare. (Yes, the nomenclature is very confusing.)

GOES-18 will work together with GOES-16, which is currently serving as GOES-East, to “watch over more than half the globe — from the west coast of Africa to New Zealand,” NOAA officials wrote in a mission description.