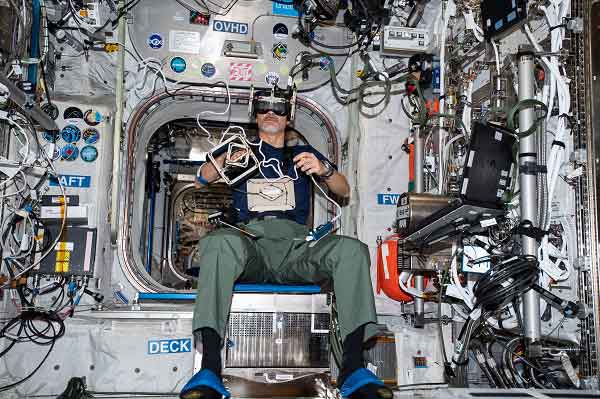 PARIS (ESA PR) — British scientists are set to use the microgravity environment of the International Space Station to investigate the health challenges ESA astronauts could experience on proposed long-duration missions to the Moon and beyond.

The projects will tackle medical issues such as muscle loss, and stress and anxiety caused by isolation.

They could even help people on Earth who suffer from conditions such as muscle degeneration or back pain.

While in orbit, astronauts exercise for two-and-a-half hours a day, consume high-protein diets, and take nutrient supplements to ward off the effects that spending time in space would otherwise have on the human body.

Funded by the UK Space Agency, the five new projects are set to boost scientists’ understanding of how people’s bodies would react to long-duration missions, insights that could be used by ESA to keep its astronauts healthy on future missions to the Moon and further into deep space.

The projects include an initiative from Manchester Metropolitan University to study the prolonged effects of isolation on physical and psychological health, and a research project from Northumbria University to investigate the relationship between microgravity and spinal health.

The research is partly enabled by the UK’s ESA membership, which gives British scientists access to state-of-the-art research facilities.

This includes access to parabolic flights that generate microgravity conditions and drop towers that produce controlled periods of weightlessness.

Elodie Viau, Head of ESA’s European Centre for Space Applications and Telecommunications in the UK, said: “As we venture further into space, we are proud to see the UK’s ESA membership help UK scientists conduct pioneering research to support these efforts.

“These projects are set to deliver a variety of benefits for people’s health, which could be applied to both ESA astronauts and people on Earth.”

Earlier this year, ESA launched its first drive for new astronauts in 11 years, with more than 22 000 people applying, including nearly 2000 from the UK.

“We can learn so much about the human body from spaceflight, especially the ageing process. This research could enable astronauts to carry out longer missions and explore further into space, whilst benefiting everyone on Earth.”

UK Science Minister George Freeman said: “Our space science is about cutting-edge life science as well as rocketry and satellites.  The UK is at the heart of state-of-the-art biomedical monitoring, providing huge potential insights into human health. For example, the way astronauts’ eyesight deteriorates in space and then repairs back on earth could provide powerful insights to help researchers at labs like Moorfields to understand eye health and potential new treatments.

“This research could allow astronauts to safely embark on longer and more challenging missions, for the benefit of us all.”