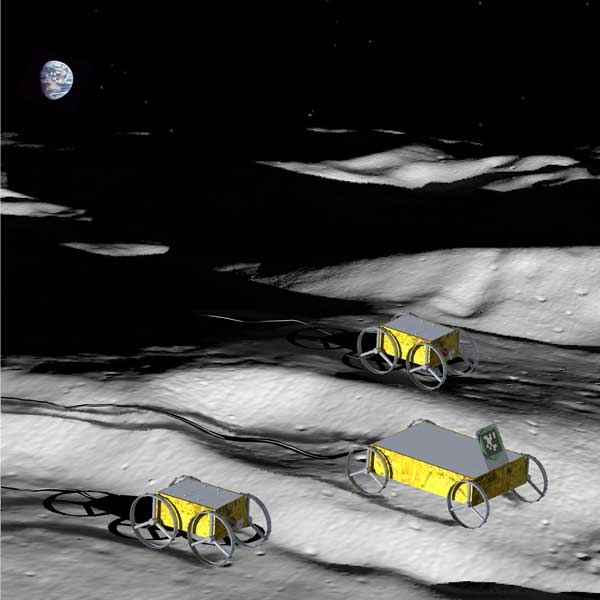 Astrobotic won the Challenge’s grand prize for Mission Activity 1, a conceptual mission to deliver power from a solar array on the rim of a permanently shadowed, lunar polar crater to a NASA rover on the crater floor. Astrobotic’s solution consists of a fleet of tethered CubeRovers that drive out from the solar array to the NASA rover and other surface assets. The CubeRovers deploy physical power transmission cables as they go, rappel down the steep crater walls, and finally charge the assets via contactless proximity wireless chargers. All the primary elements of this system have been in development at Astrobotic for several years.

Astrobotic also partnered with Eternal Light, a company specializing in lunar energy distribution. Together – through a collaboration dubbed AstroLight – they won a prize for Mission Activity 2, a conceptual mission to deliver power to a NASA water extraction plant inside the crater. The teams’ solution consisted of wireless mobile power transmission, or power beaming, from the rim to the crater floor.

Both prizes complement Astrobotic’s ongoing development of lunar surface power infrastructure, including Vertical Solar Array Technology (VSAT) and proximity wireless chargers being advanced through existing NASA Game Changing Development and Tipping Point contracts, respectively. The wireless chargers are being matured in partnership with WiBotic and the University of Washington.

“With our recent infrastructure wins, Astrobotic now has a hand in what are expected to be the primary means of power distribution on the lunar surface: physical cables and power beaming,” said John Thornton, Astrobotic CEO. “Imagine hiring one company to tackle everything for you, end-to-end – your payload’s integration, delivery, mobility, and continuous power all streamlined from one source. Astrobotic is quickly approaching this business model.”

In total, 60 U.S.-based teams submitted designs to Phase 1 of the Watts on the Moon Challenge. Phase 2, expected to open in fall 2021 and award up to $4.5 million in additional prizes, will culminate in technology demonstrations of working prototypes of the Phase 1 designs.