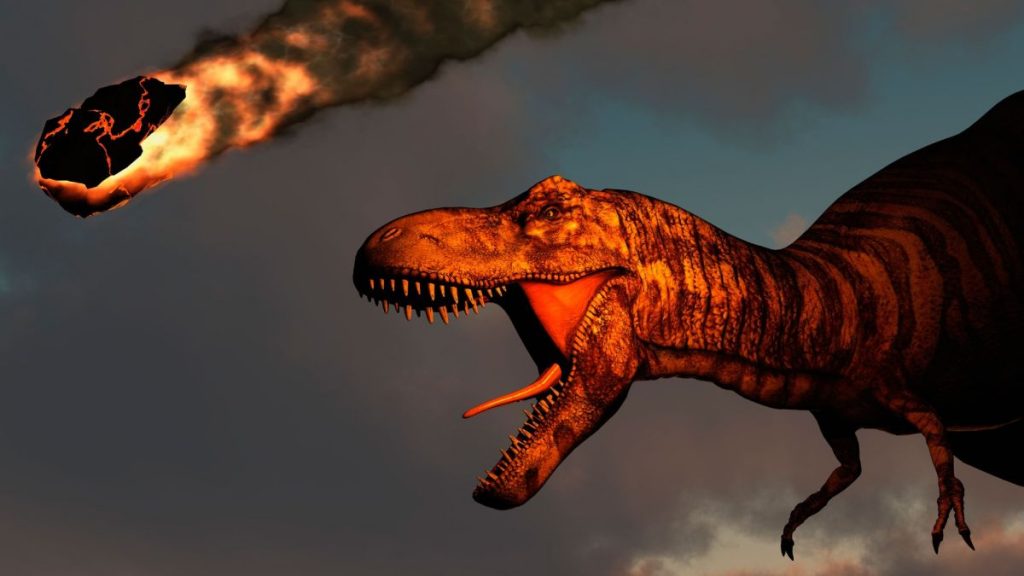 The asteroid that struck Earth and triggered the mass extinction that wiped out the dinosaurs also caused an earthquake that shook the planet for weeks or even months, according to new research.

About 66 million years ago, a space rock 6 miles (10 kilometers) wide now called the Chicxulub impactor slammed into Earth off the coast of the Gulf of Mexico. The asteroid impact and its aftermath caused what has become known as the Cretaceous-Paleogene (K-Pg) mass extinction event, killing off three-quarters of species on Earth and leaving its signature scattered throughout the geological record. Now, new research suggests that the impact also triggered a “mega earthquake” that released energy equivalent to 10^23 joules — around 50,000 times more energy than was released by the magnitude 9.1 earthquake that hit Sumatra in 2004.

Hermann Bermúdez, a geologist at Montclair State University in New Jersey, assessed the magnitude of the earthquake triggered by the Chicxulub impact by visiting K-Pg mass extinction event outcrops located in Texas, Alabama and Mississippi.

He also incorporated his own previous research regarding the effects of the asteroid impact in Colombia and Mexico. On Columbia’s Gorgonilla Island, around 1,900 miles (3,000 km) from the Chicxulub impact site, the geologist had found layers of sediment that contained deposits of spherules.

Spherules are small glass beads no larger than a grain of sand (around 1 millimeter) that form when heat and pressure from a massive impact melt material from Earth’s crust and eject it into the atmosphere, where it cools to glass beads and then falls back Earth. In addition to the spherules, Bermúdez found in the same sediments more shardlike tektites and microtektites, which also represent material ejected into the atmosphere during an asteroid impact.

The spherules and tektites found along the coast of Gorgonilla Island revealed what took place on the seafloor roughly 1.25 miles (2 km) underwater around the time of the asteroid impact. As the Chicxulub impactor hit the Earth, layers of mud and sandstone as much as 33 to 50 feet (10 to 15 meters) below the ocean floor were deformed. Bermúdez thinks that this deformation, which is preserved in the outcrops today, was caused be shaking from the impact.

The faults and deformations that are the geologic signature of this shaking continue until the spherule-rich layers of sediment. These layers must have been deposited after the impact, but because it would have taken time for these layers to accumulate, Bermúdez hypothesizes that the shaking triggered by the impact continued for weeks or even months.

“The section I discovered on Gorgonilla Island is a fantastic place to study the K-Pg boundary because it is one of the best-preserved and it was located deep in the ocean, so it was not affected by tsunamis,” Bermúdez said in a statement (opens in new tab).

— 10 Earth impact craters you must see
— Meteor crater: The hole from space that keeps on giving
— Scientists uncover the largest crater on Earth under 100,000 years old

Bermúdez has also found evidence of a mega-earthquake triggered by the Chicxulub impact in the geological record in Mexico, where he found the signature of liquefaction, in which strong shaking caused water-saturated sediments to flow like a liquid.

At the sites in Mississippi, Alabama and Texas, Bermúdez observed faults and cracks that were also likely to be connected to the mega-earthquake caused by the Chicxulub impact. Several outcrops showed signs of deposits left by enormous waves of a tsunami also triggered by the impact of the massive asteroid upon Earth.

Bermúdez will present the research at the Geological Society of America Connects meeting in Denver on Sunday (Oct. 9).