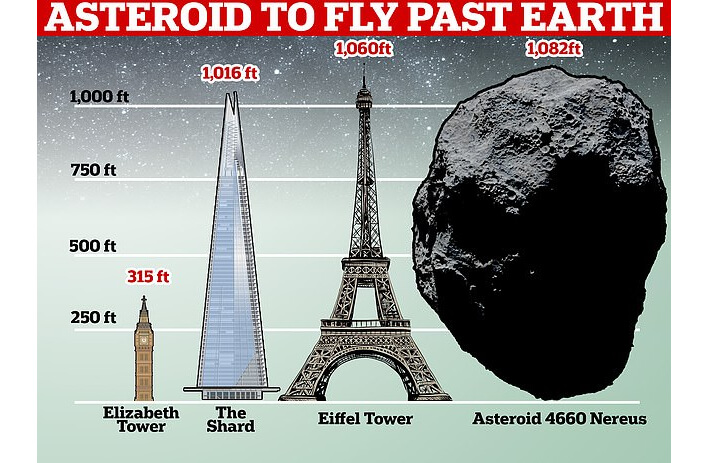 A 1,083-foot (330-meter) asteroid is creating a buzz on social media this week. Yes, it will pass Earth on Saturday, December 11, 2021. Closest approach will happen at 13:51 UTC (10:51 a.m. EST; translate UTC to your time) on December 11. No, it will not strike Earth. At its closest, Nereus will pass about 2.4 million miles (3.9 million km) away. That’s close on a cosmic distance scale. But it’s still about 10 times the moon’s distance. Yet this close pass and others has caused 4660 Nereus to be classified as a Potentially Hazardous Asteroid. It makes close approaches several times each century. And – in part because it comes close and in part because it’s “slow” – space entrepreneurs have cast their gaze toward Nereus as well. By some reports, the space rock is worth an estimated $5 billion in precious metals.

It completes an orbit around the sun every 661 days (1.81 Earth-years). Saturday’s close pass of 10 lunar-distances will be its closest until 2060, when Nereus will pass at only three lunar-distances.

Will it be visible? Not to eye alone. Asteroid 4660 Nereus will reach a visual magnitude around 12. That’s far too faint to see with the eye. To see Nereus, you would need at least an 8-inch (20-cm) telescope, or larger. Telescopic observers… see the charts below.

It’s an elongated rock that travels at 14,719 miles per hour (23,688 km/h). While this may sound like a huge speed, Nereus is in fact a “slow” space rock compared to many other asteroids. That relatively low speed is an advantage for those who want send a robotic spacecraft in the future to study it. That is, its slow speed means a spacecraft can rendezvous with the asteroid more easily. In 2009, space scientists considered Nereus “a strong candidate for a rendezvous mission.” It would take about a year for a robotic spacecraft to enter orbit around Nereus.

And space entrepreneurs are eyeing Nereus as well, for the same reason, because of its slow speed relative to other asteroids. The Hill reported on December 1:

Asterank, a database that monitors more than 600,000 asteroids, estimates that Nereus’ value is at $4.71 billion, making it one of the most cost-effective asteroids to leverage for mineral resources. The asteroid is thought to contain billions worth of nickel, iron and cobalt.

Asteroid mining is a concept that began to gain popularity in the early 2010s, but now as the commercial space industry has taken off with big players like Blue Origin and SpaceX, it could pick back up again starting with Nereus.

Astronomers are studying Nereus at this flyby

In 2002, the space rock made a similar approach to Earth which enabled scientists to study its shape and size using radar. Using the Arecibo Observatory and the Goldstone Antenna at California, astronomers sent radio signals that allowed them to obtain very good radar images. However, since this week’s approach is slightly closer than the previous ones, scientists might detect some surface features that were not visible in 2002.

This closer approach might also reveal if the asteroid has a “moon” orbiting around it, as many asteroids do. Bad luck, though. Astronomers say the iconic Arecibo Observatory in Puerto Rico was the best tool for detecting a “moon” or secondary space rock. And, as you might have heard, Arecibo collapse and was decommissioned last year.

But astronomers are already studying asteroid Nereus during this flyby, with other earthly observing tools. Radar observations from Goldstone started on December 5. They’re expected to continue for about two weeks.

Will you see it?

As mentioned above, the asteroid will not be visible to the eye. You will need at least a __ telescope to see it.

An amateur astronomer pointing a telescope at the correct location and time, can carefully observe the stars in the field of view, and then compare the view 15 or 20 minutes later to try to detect an apparent star that has changed position. The moving “star” will be asteroid Nereus. A long-exposure image would be an easier way to detect the space rock, since it will appear as a streak or line, because of its motion.