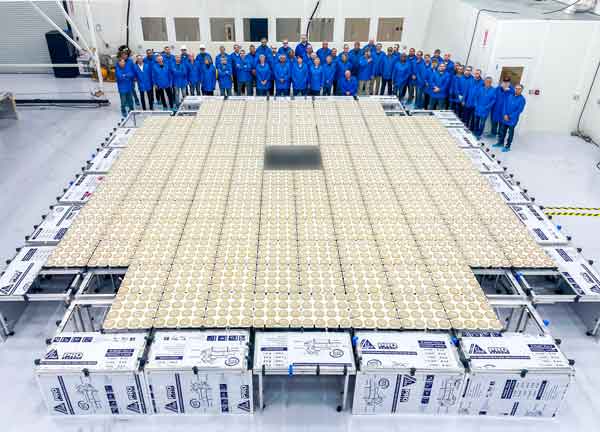 Space communications company AST SpaceMobile (NAS: ASTS) has upsized its offering of Class A common stock from $65 million to $75 million.

AST SpaceMobile will sell 13,636,364 shares of stock to the public at $5.50 per share to raise $75 million after underwriting discounts, commissions and other expenses. Underwriter B. Riley Securities has an option to sell an additional 2,045,454 shares of stock that would increase the amount raised to $86.25 million.

Shares of AST SpaceMobile plunged 13 percent after the satellite communications company announced the initial $65 million offering on Tuesday. The stock is currently trading at $5.72.

SpaceMobile is raising the money to continue development of its constellation of satellites that will provide communications services to cell phones.

Deutsche Bank analysts raised their price target for AST SpaceMobile (NAS: ASTS) from $30 to $32 based on progress the company has made in recent months. Deutsche Bank analysts believe the accomplishment of early milestones has reduced the technological risk associated with the ambitious venture.

AST SpaceMobile launched its BlueWalker 3 prototype satellite on Sept. 10. The spacecraft has since unfurled its massive antenna that measures 64 square meters (689 square feet). It is the largest communications satellite array ever deployed in Earth orbit.

AST SpaceMobile will use BlueWalker 3 to test the delivery of communications to unmodified cell phones through existing cellular phone networks.

The International Astronomical Union Center for the Protection of the Dark and Quiet Sky from Satellite Constellation Interference has raised concerns about the impact of BlueWalker 3 impact on astronomy.

“New measurements reveal that this low Earth orbiting satellite is now one of the brightest objects in the night sky, outshining all but the brightest stars. In addition, the satellite’s use of terrestrial radio frequencies poses a new challenge to radio astronomy,” IAU said in a press release.

IAU said the large satellites are not subject to radio quiet zone restrictions in the same way as ground-based cellular networks. Thus, they could potentially have severe impacts on radio astronomy research as well as geodesy studies and space-physics experiments.

“Astronomers build radio telescopes as far away as possible from human activity, looking for places on the planet where there is limited or no cell phone coverage. Frequencies allocated to cell phones are already challenging to observe even in radio quiet zones we have created for our facilities. New satellites such as BlueWalker 3 have the potential to worsen this situation and compromise our ability to do science if not properly mitigated,” said SKA Observatory Director-General Philip Diamond. “This is a key reason why the SKAO is deeply involved in the IAU CPS and promoting the equitable and sustainable use of space.”

IAU said it is currently in discussions with AST SpaceMobile on possible mitigation measures. In the meantime, it has written a letter to the Federal Communications Commission (FCC) about its concerns, and urged astronomers worldwide to observe BlueWalker 3 to better categorize its impact on astronomy.