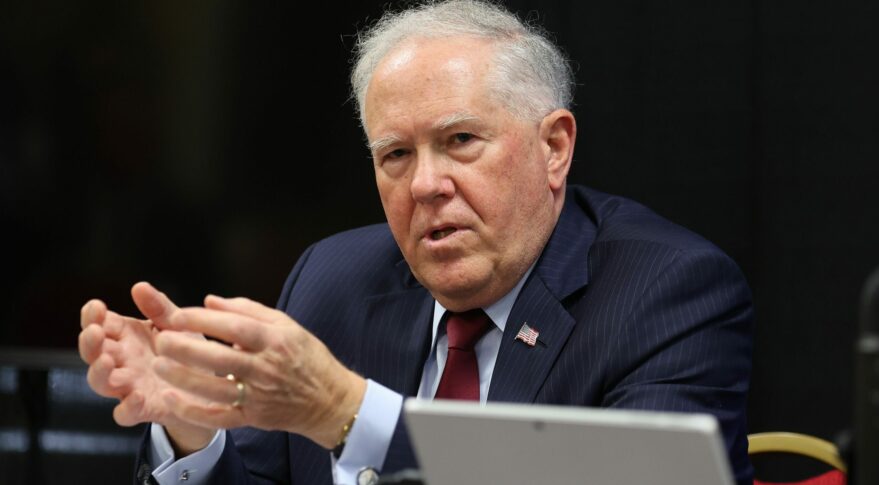 Kendall: “I wanted to get an update from them on where they are, where they see things”

COLORADO SPRINGS — Air Force Secretary Frank Kendall on Aug. 24 met with the chief executives of United Launch Alliance and Blue Origin and was briefed on the Vulcan Centaur, a new launch vehicle developed by ULA that is powered by Blue Origin’s BE-4 engines.

“I did have a chance to meet with ULA and Blue Origin today,” Kendall said at a news conference at the 36th Space Symposium.

The main topic of the meeting were the delays in the development and testing of the BE-4 rocket engine that ULA needs in order to fly its new rocket.

“I wanted to get an update from them on where they are, where they see things,” said Kendall.

Vulcan is a program the Air Force is deeply invested in for several reasons. It is paying nearly $1 billion for vehicle development costs, and it is the vehicle the Air Force selected in 2020 — along with SpaceX’s Falcon 9 and Falcon Heavy — to launch national security satellites for the next five years.

The rocket also is of strategic importance to the Air Force because it replaces ULA’s Atlas 5 in the national security launch fleet. The Atlas 5 has to be phased out because it uses the Russian-made RD-180 rocket engine. Congress passed a law in 2016 that prohibits the U.S. military after 2022 from procuring launch services on vehicles that rely on the RD-180 engine.

The BE-4 is years behind schedule. ULA’s CEO Tory Bruno told SpaceNews recently he is expecting delivery of the first two flight-ready engines later this year. In a tweet on Tuesday Bruno said: “I expect engines before the end of the year. If there are any unforeseen challenges, they could move past that. At present, the engine is performing well and is in prequel testing. Flight engines have begun fabrication.”

Kendall, who became secretary of the Air Force in late July, was in charge of Pentagon acquisitions during the Obama administration when DoD had to respond to Congress’ push to ban military use of the RD-180.

“The idea was that we would work with industry — which had a commercial market as well as a military market — to get them to a position where they could give us assurances of access to space, and continued competition,” Kendall said.

Kendall did not provide details of his discussion with Bruno and Blue Origin CEO Bob Smith. But he expressed confidence that they will be able to work through the problems.

“They still hope to be able to execute. But there’s obviously risk in that schedule,” said Kendall.

Kendall also pointed out that one reason he pushed to have two providers in the national security space launch program is to offer a fallback in case one of them isn’t able to launch payloads.

“I’m actually pretty happy with the way things have played out in space launch,” he said. “We were after, first and foremost, assured access to space, which to us meant two launch service providers.”

“And the reason to have two launch providers is that always something happens to one, and you’ve got another one to rely on,” Kendall said.

“The Blue Origin engine is late, I know, it’s causing some problems,” he said. “But we have another option. And the way the contracts I think have been set up is to allow us to go to that option if we have to.”

Kendall said he believes ULA and Blue Origin “will probably get there, and they’re motivated to do that. So we’ll see what happens. Hopefully we’ll be all right and they won’t have any additional schedule delays.”