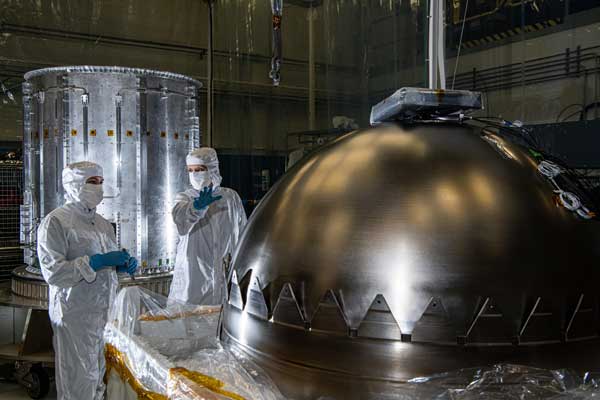 Take a closer look at the complex choreography involved in building NASA’s Europa Clipper as the mission to explore Jupiter’s moon Europa approaches its 2024 launch date.

PASADENA, Calif. (NASA PR) – The hardware that makes up NASA’s Europa Clipper spacecraft is rapidly taking shape, as engineering components and instruments are prepared for delivery to the main clean room at the agency’s Jet Propulsion Laboratory in Southern California. In workshops and labs across the country and in Europe, teams are crafting the complex pieces that make up the whole as mission leaders direct the elaborate choreography of building a flagship mission.

The massive 10-foot-tall (3-meter-tall) propulsion module recently moved from NASA’s Goddard Space Flight Center in Greenbelt, Maryland, to the Johns Hopkins Applied Physics Laboratory (APL) in Laurel, Maryland, where engineers will install electronics, radios, antennas, and cabling. The spacecraft’s thick aluminum vault, which will protect Europa Clipper’s electronics from Jupiter’s intense radiation, is nearing completion at JPL. The building and testing of the science instruments at universities and partner institutions across the country continue as well.

The mission is also gearing up for its System Integration Review in late 2021, when NASA will review plans for assembling and testing Europa Clipper, and its instruments are inspected in detail.

“It’s really exciting to see the progression of flight hardware moving forward this year as the various elements are put together bit by bit and tested,” said Europa Clipper Project Manager Jan Chodas of JPL. “The project team is energized and more focused than ever on delivering a spacecraft with an exquisite instrument suite that promises to revolutionize our knowledge of Europa.”

Jupiter’s icy moon Europa, which harbors an internal ocean with twice the amount of water in Earth’s oceans combined, may currently have conditions suitable for supporting life. Europa Clipper will carry a broad suite of science instruments into orbit around Jupiter and conduct multiple close flybys of Europa to gather data on its atmosphere, surface, and interior.

Hardware in the Works

Delivery of the towering propulsion module from Goddard to APL marked a milestone for that major piece of hardware. APL built the twin cylinders that make up the module and shipped them to JPL, where technicians added thermal tubing that will carry coolant to keep the spacecraft from getting too hot or too cold in deep space. From there, the cylinders went to Goddard, where propellant tanks were installed inside of them and 16 rocket engines were attached to the outside.

Another large piece of hardware nearing completion is the spacecraft’s radiator, which connects to the thermal tubing. The width and length of a twin-size bed, the radiator’s 3-inch-thick (7.5-centimeter-thick) panel has the crucial job of radiating heat out into space to keep the spacecraft within its operating temperature range. It is covered with louvers that open and close automatically as the spacecraft disperses more or less heat to regulate its temperature.

Meanwhile, work at APL begins to integrate the propulsion module and the telecommunications hardware (electronics, radios, antennas, and cabling). And construction of a high-gain antenna – a dish nearly 10 feet (3 meters) wide – is underway at vendor Applied Aerospace Structures Corporation in Stockton, California. It will be delivered to APL this year, where it will be integrated before the entire module comes back to JPL a final time. By the spring of 2022, the huge element will join other Europa Clipper hardware streaming into JPL’s main high bay for assembly, test, and launch operations (ATLO).

One of the first elements in place for ATLO will be the spacecraft’s vault, now entering its final stage of fabrication at JPL. Eventually, the vault will be bolted to the top of the propulsion module and affixed with miles of cabling so that the power box and computer inside can communicate with the other subsystems.

Attached to the vault will be a deck, also completing assembly at JPL, that will support many of the instrument sensors. Called the nadir deck, it stabilizes the spacecraft’s sensors and helps ensure they are oriented correctly.

At the same time that the spacecraft body, electronics, and engineering subsystems come together, nine science instruments are being assembled and tested across a network of clean rooms at NASA centers, partner institutions, and private industry vendors. The suite of instruments will investigate everything from the depth of the internal ocean and its salinity to the thickness of the ice crust and potential plumes that may be venting subsurface water into space.

Slated to be delivered to ATLO from late 2021 through mid-2022, the instruments, which include cameras to capture surface geology in detail, are undergoing extensive testing. Engineers want to be sure the instruments can communicate correctly with the flight computer, spacecraft software, and the power subsystem, to be able to respond to commands and transmit data back to Earth.

Mission leaders acknowledge that COVID-19 challenges have stretched the project and instrument teams as they find ways to meet deadlines when parts are delayed or staffing is short. Engineers, technicians, and scientists continue to power through.

“What we’ve seen, even in the midst of the pandemic, is that the engineering and instrument teams are responding very well. The pandemic has affected mission schedule, but the teams are tackling the challenges, communicating openly, and displaying tremendous flexibility to keep the hardware on track for our October 2024 launch,” said Europa Clipper Deputy Project Manager Jordan Evans. “We see it day in and day out, across the team, and it’s fantastic.”

Missions such as Europa Clipper contribute to the field of astrobiology, the interdisciplinary research on the variables and conditions of distant worlds that could harbor life as we know it. While Europa Clipper is not a life-detection mission, it will conduct detailed reconnaissance of Europa and investigate whether the icy moon, with its subsurface ocean, has the capability to support life. Understanding Europa’s habitability will help scientists better understand how life developed on Earth and the potential for finding life beyond our planet.

More information about Europa can be found here: