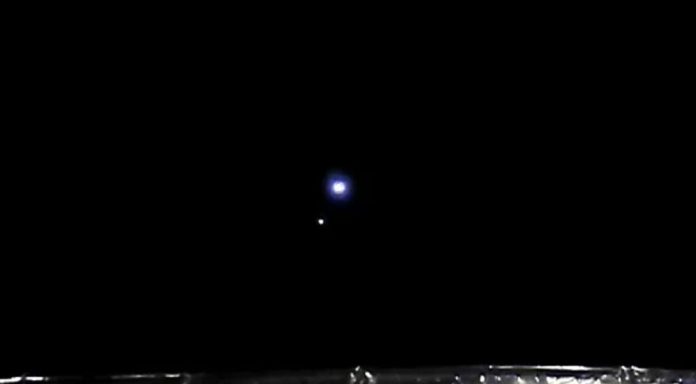 HELSINKI — A spacecraft involved in China’s 2020 Chang’e-5 lunar sample-return mission is now in a unique orbit around the Moon, more than a year after completing its primary mission.

The service module, which played a large part in delivering 1.731 kilograms of fresh lunar samples to Earth in December 2020, is now in a distant retrograde orbit (DRO) of the moon, according to amateur satellite trackers.

China has not published an update on Chang’e-5’s activities since May 2021, when the China Lunar Exploration Program released images the spacecraft had taken from deep space.

However amateur satellite tracker Scott Tilley and others, including Jean-Luc Milette and Edgar Kaiser, have been following Chang’e-5’s travels through space and provide evidence for the new lunar orbit following months of observations.

A distant retrograde orbit sees a spacecraft interact with two gravitationally stable areas in front of and behind the moon with respect to the Earth. The spacecraft’s distance from the moon means it orbits only once every couple of weeks.

Such an orbit has not been used before, but is planned to be utilized by NASA’s upcoming Artemis 1 mission later this year. The agency’s canceled Asteroid Redirect Mission also considered using a DRO.

Nailing down the orbit of Chang’e-5 was a challenge, Tilley told SpaceNews in an email, citing the limited size of antennae available to amatuer trackers and equipment calibration. “The primary issue for amateurs was obtaining high accuracy positional locations of the spacecraft in the sky,” says Tilley.

However public collaboration between trackers across the world helped constrain the apparent path of the spacecraft, says Tilley, who has tracked Chang’e-5 from soon after its launch in November 2020 and helped provide up-to-date information, as China did not publicly reveal the entire mission timeline and major milestones in advance.

“That’s why I found this latest part of tracking Chang’e-5 the most satisfying. It boiled down to a purely amateur effort.”

It is unclear what China is planning with the DRO test, but Chang’e lunar missions have earlier been sent on extended missions to add value or even as important tests for later missions.

Chang’e-2 conducted a flyby of the near Earth asteroid Toutatis in 2012 after completing its mapping of the moon. The service module for the 2014 Chang’e-5 T1 mission, a test run for a sample-return, was used to test out orbiting at Earth-moon Lagrange point 1.

This gave the first hint that China was considering a then-unannounced lunar far side landing mission with Chang’e-4. Incidentally the upper stage of the Long March 3C used to launch the mission is set to impact the moon in March.

However spacecraft activity tracker Jonathan McDowell, also an astrophysicist at the Harvard-Smithsonian Center, told SpaceNews that he believes China is probably using the Chang’e-5 spacecraft gaining experience with astrodynamics.

“They are using it as a toy to play around with. It is clearly useful as a stable lunar orbit for future missions, I just don’t think it’s a specific precursor.”

China plans to launch a near Earth asteroid sample-return mission around 2024, but while the mission will build on experience and engineering from Chang’e-5, the mission profile does not suggest use of a lunar DRO.

Chang’e-5 was primarily a complex, three-week-long mission to collect fresh lunar samples from the near side of the moon. Launching from Wenchang on a Long March 5 rocket in November 2020, the mission involved the orbiter, a lander, an ascent vehicle and a return capsule.

The lander perished after sunset over its landing site due to intense cold of the lunar night, while the ascent vehicle was commanded to impact the moon after carrying the samples into orbit, docking with the orbiter, and transferring the lunar payload to a return capsule. The return capsule was recovered in Siziwang Banner in Inner Mongolia after reentry into Earth’s atmosphere.

Portions of the samples are now being studied by Chinese and international scientists. Research has included dating the rock samples, analyzing composition and volatile content, oxygen extraction, refining the ages of planetary bodies and more.

However, after releasing the capsule containing samples collected from Oceanus Procellarum, the orbiter itself continued its journey away from Earth, heading for the Sun-Earth Lagrange point 1, roughly 1.5 million kilometers away. The spacecraft is using extra fuel thanks to the precise initial orbital injection by the Long March 5.

The spacecraft entered orbit around this gravitational stable point in March 2021. There it conducted space environment tests and solar and Earth observations under the control of the Beijing Aerospace Control Center (BACC).

Jing Peng, deputy chief designer of the Chang’e-5 spacecraft system at the China Academy of Space Technology (CAST), said during the Global Space Exploration (GLEX) conference in St. Petersburg, Russia, in June 2021, that a visit to a planetary body such as Venus may not be possible due to a lack of propellant.

“I don’t think there will be many opportunities for the orbiter to perform more complex orbit maneuvers with other bodies,” he said. “I think it will stay in Lagrange point 1 or the Earth-moon system,” Peng said.

The orbiter returned to the Earth-moon system in September 2021, again tracked by enthusiasts.

China is planning to launch another moon sample-return, Chang’e-6, around 2024, following the launch of the multi-spacecraft Chang’e-7 orbiter, lander, relay satellite and rover mission.

The country is also planning an International Lunar Research Station on the moon’s surface in collaboration with Russia.