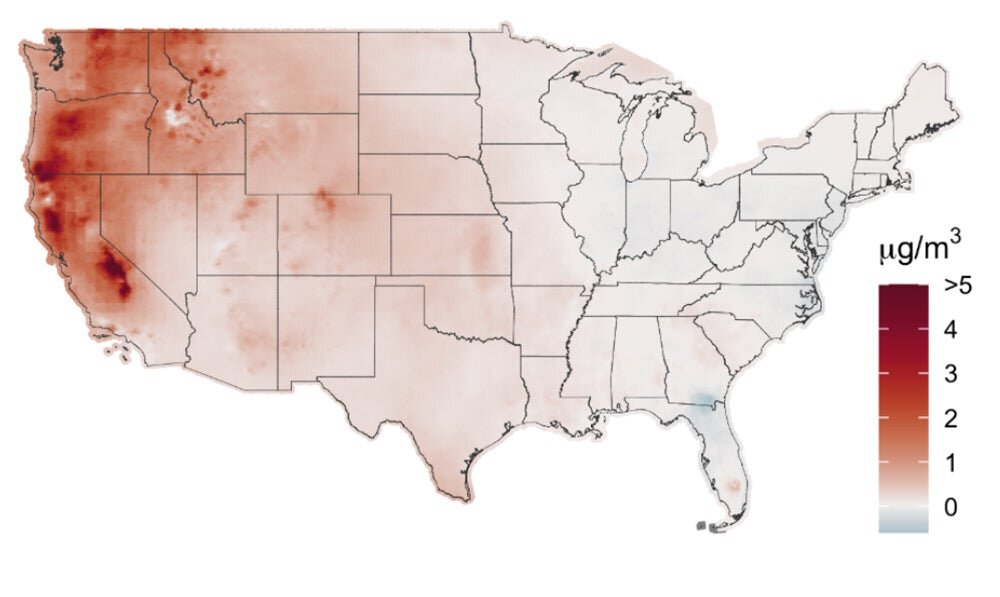 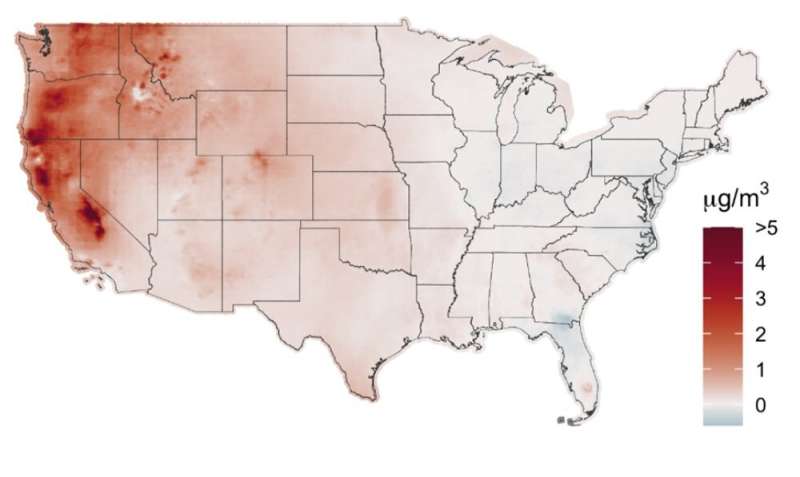 Over the last decade, PM2.5 from wildfire smoke has increased in much of the U.S., particularly in Western states, but some areas in the South and East have seen modest declines. This map shows the decadal change in smoke PM2.5, meaning the difference in daily average smoke PM2.5 during 2006−2010 compared to 2016−2020. Credit: Childs et al. 2022, Environmental Science & Technology

Wildfire smoke now exposes millions of Americans each year to dangerous levels of fine particulate matter, lofting enough soot across parts of the West in recent years to erase much of the air quality gains made over the last two decades.

Those are among the findings of a new Stanford University study published Sept. 22 in Environmental Science & Technology that focuses on a type of particle pollution known as PM2.5, which can lodge deep in our lungs and even get into our bloodstream.

Using statistical modeling and artificial intelligence techniques, the researchers estimated concentrations of PM2.5 specifically from wildfire smoke in sharp enough detail to reveal variations within individual counties and individual smoke events from coast to coast from 2006 to 2020.

“We found that people are being exposed to more days with wildfire smoke and more extreme days with high levels of fine particulate matter from smoke,” said lead study author Marissa Childs, who worked on the research as a Ph.D. student in Stanford’s Emmett Interdisciplinary Program in Environment and Resources (E-IPER). Unlike other major pollutant sources, wildfire smoke is considered an “exceptional event” under the Clean Air Act, she explained, “which means an increasing portion of the particulate matter that people are exposed to is unregulated.”

Childs and her co-authors were surprised to discover how rapidly the most extreme exposures have gone from rarity to routine.

While less than half a million people lived in areas experiencing unhealthy air at least one day per year a decade ago, measured as a day with PM2.5 concentrations from wildfire smoke reaching at least 100 micrograms per cubic meter, that number has ballooned to over eight million in recent years—a 27-fold increase. “That was way higher than I was expecting, and that’s the average over multiple recent years,” said senior study author Marshall Burke, an associate professor of Earth system science at the Stanford Doerr School of Sustainability. “Many individual years, in particular 2020, have been much worse.”

The number of people exposed to the most extreme levels of pollution grew even more dramatically, with an 11,000-fold increase in the number of people experiencing at least one day above 200 micrograms per cubic meter. “Two-hundred microgram days basically were non-existent a decade ago,” Burke said. Now, over 1.5 million people live in locations “routinely” exposed to these conditions.

Concentrations of PM2.5 from wildfire smoke are growing fastest for higher income populations and those that census data show to be predominantly Hispanic—a reflection of the demographics in the western and southwestern states that have been hardest hit by wildfires.

The authors set out to understand the impacts of wildfire smoke on society. “To do that well, you need local-level measures of smoke exposure, and you need them over long time periods. Those didn’t exist,” said Burke, who is also a center fellow at the Freeman Spogli Institute for International Studies, the Stanford Woods Institute for the Environment, and the Stanford Institute for Economic Policy Research.

“Smoke pollution is particularly challenging to measure, both because it’s difficult to know which portion of particulate matter is from smoke and because we only have pollution monitors at a limited number of locations in the U.S.,” explained Childs, who is now a postdoctoral scholar at Harvard’s Center for the Environment. Using satellite data, the Stanford team trained a machine learning model to accurately predict PM2.5 concentrations from wildfire smoke in areas that don’t have monitors.

The resulting estimates can be checked against long-running measurements from federal air quality monitors, deliver predictions quickly once trained, easily scale to large areas, and overcome previous models’ tendency to smooth out the peaks of extreme smoke events.

Together, these advances mean the Stanford model can help researchers better understand societal impacts from wildfire smoke pollution, including severe smoke events, which are becoming more common as climate change extends wildfire season, accelerates fire frequency, and expands burn areas. “What areas are we most worried about? What levels of exposure really matter, and who’s being most harmed? We can’t answer those questions unless we have accurate measures of who is exposed to what,” Burke said.

The model, which the researchers are already updating with 2022 data, can also inform air quality regulation and wildfire mitigation efforts. According to Burke, “It’s important for regulators to understand what’s causing changes in air quality, and to think about how we might amend existing regulations to account for the fact that wildfires are more and more important in determining air quality.”

Citation:
Wildfire smoke is unraveling decades of air quality gains (2022, September 22)
retrieved 23 September 2022
from https://phys.org/news/2022-09-wildfire-unraveling-decades-air-quality.html
This document is subject to copyright. Apart from any fair dealing for the purpose of private study or research, no
part may be reproduced without the written permission. The content is provided for information purposes only. 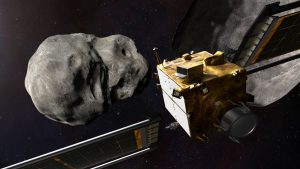 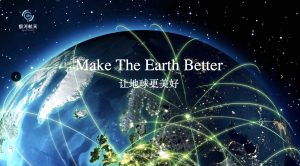