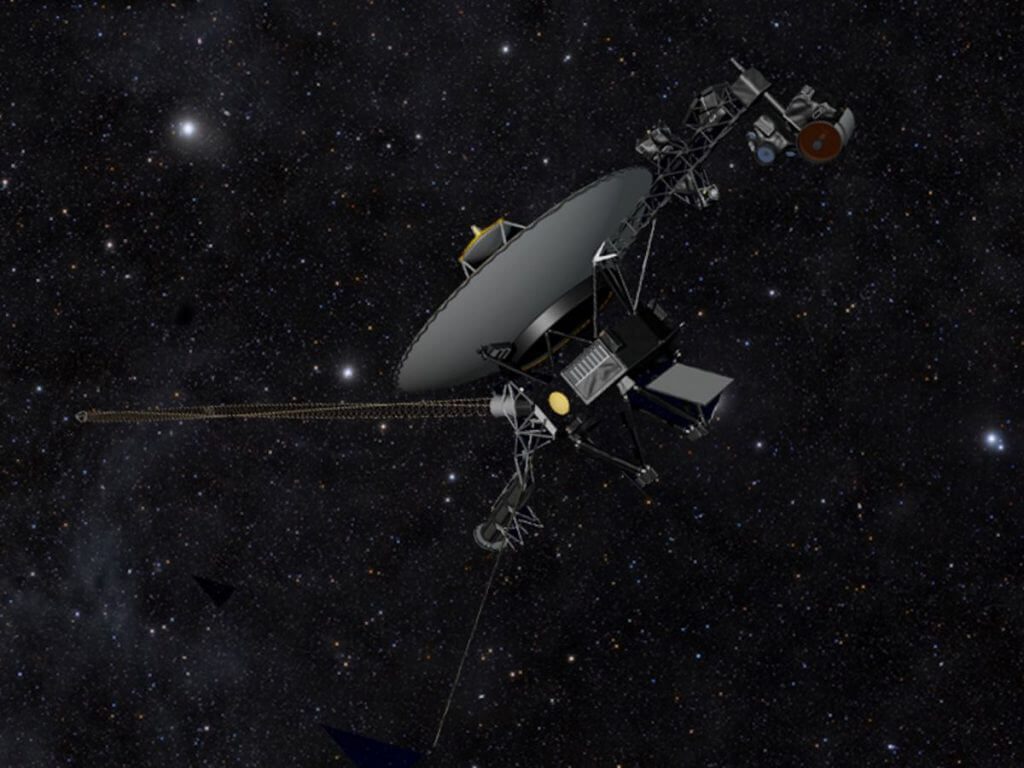 This article was originally published at The Conversation. (opens in new tab) The publication contributed the article to Space.com’s Expert Voices: Op-Ed & Insights.

Voyager 1 is the farthest human-made object from Earth. After sweeping by Jupiter, Saturn, Uranus and Neptune, it is now almost 15 billion miles (24 billion kilometers) from Earth (opens in new tab) in interstellar space. Both Voyager 1 and its twin, Voyager 2, carry little pieces of humanity in the form of their Golden Records (opens in new tab). These messages in a bottle include spoken greetings in 55 languages, sounds and images from nature, an album of recordings and images from numerous cultures, and a written message of welcome from Jimmy Carter, who was U.S. president when the spacecraft left Earth in 1977 (opens in new tab).

The Golden Records were built to last a billion years in the environment of space, but in a recent analysis of the paths and perils these explorers may face, astronomers calculated that they could exist for trillions of years without coming remotely close to any stars.

Having spent my career in the field of religion and science (opens in new tab), I’ve thought a lot about how spiritual ideas intersect with technological achievements. The incredible longevity of the Voyager spacecraft presents a uniquely tangible entry point into exploring ideas of immortality.

For many people, immortality is the everlasting existence of a soul or spirit that follows death. It can also mean the continuation of one’s legacy in memory and records. With its Golden Record, each Voyager provides such a legacy, but only if it is discovered and appreciated by an alien civilization in the distant future.

Religious beliefs about immortality are numerous and diverse. Most religions foresee a postmortem career for a personal soul or spirit, and these range from everlasting residence among the stars to reincarnation.

The ideal eternal life for many Christians and Muslims is to abide forever in God’s presence in heaven or paradise. Judaism’s teachings about what happens after death are less clear. In the Hebrew Bible, the dead are mere “shades” in a darkened place called Sheol. Some rabbinical authorities give credence to the resurrection of the righteous (opens in new tab) and even to the eternal status of souls.

Immortality is not limited to the individual. It can be collective as well. For many Jews, the final destiny of the nation of Israel or its people (opens in new tab) is of paramount importance. Many Christians anticipate a future general resurrection (opens in new tab) of all who have died and the coming of the kingdom of God for the faithful.

Jimmy Carter, whose message and autograph are immortalized in the Golden Records, is a progressive Southern Baptist and a living example of religious hope for immortality. Now battling brain cancer (opens in new tab) and approaching centenarian status, he has thought about dying. Following his diagnosis, Carter concluded in a sermon (opens in new tab): “It didn’t matter to me whether I died or lived. … My Christian faith includes complete confidence in life after death. So I’m going to live again after I die.”

It is plausible to conclude that the potential of an alien witnessing the Golden Record and becoming aware of Carter’s identity billions of years in the future would offer only marginal additional consolation for him. Carter’s knowledge in his ultimate destiny is a measure of his deep faith in the immortality of his soul. In this sense, he likely represents people of numerous faiths.

For people who are secular or nonreligious there is little solace to be found in an appeal to the continuing existence of a soul or spirit following one’s death. Carl Sagan, who came up with the idea for the Golden Records and led their development, wrote of the afterlife: “I know of nothing to suggest that it is more than just wishful thinking (opens in new tab).” He was more saddened by thoughts of missing important life experiences — like seeing his children grow up — than fearful about the expected annihilation of his conscious self with the death of his brain.

For those like Sagan there are other possible options for immortality. They include freezing and preserving the body for future physical resurrection (opens in new tab) or uploading one’s consciousness and turning it into a digital form (opens in new tab) that would long outlast the brain. Neither of these potential paths to physical immortality has proved to be feasible yet.

The Voyagers and legacy

Most people, whether secular or religious, want the actions they do while alive to bear continuing meaning into the future as their fruitful legacy (opens in new tab). People want to be remembered and appreciated, even cherished. Sagan summed it up nicely: “To live in the hearts we leave behind is to live forever (opens in new tab).”

With Voyagers 1 and 2 estimated to exist for more than a trillion years, they are about as immortal as it gets for human artifacts. Even before the sun’s expected demise when it runs out of fuel in about 5 billion years, all living species, mountains, seas and forests will have long been obliterated (opens in new tab). It will be as if we and all the marvelous and extravagant beauty of planet Earth never existed — a devastating thought to me.

But in the distant future, the two Voyager spacecraft will still be floating in space, awaiting discovery by an advanced alien civilization for whom the messages on the Golden Records were intended. Only those records will likely remain as testimony and legacy of Earth, a kind of objective immortality.

Religious and spiritual people can find solace in the belief that God or an afterlife waits for them after death. For the secular, hoping that someone or something will remember humanity, any wakeful and appreciative aliens will have to do.

Follow all of the Expert Voices issues and debates — and become part of the discussion — on Facebook and Twitter. The views expressed are those of the author and do not necessarily reflect the views of the publisher.