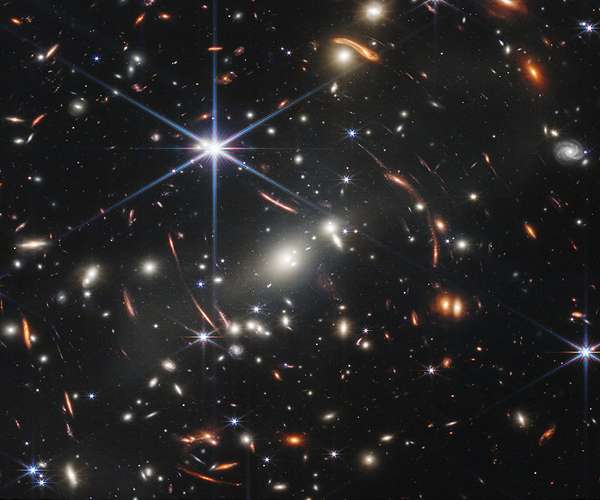 Humanity’s view of the distant cosmos will never be the same.

The James Webb Space Telescope, the most powerful to be placed in orbit, has revealed the clearest image to date of the early universe, going back 13 billion years, US space agency NASA said Monday.

The stunning shot, released in a White House briefing by President Joe Biden, is overflowing with thousands of galaxies and features some of the faintest objects observed, colorized in blue, orange and white tones.

Known as Webb’s First Deep Field, it shows the galaxy cluster SMACS 0723, which acts as a gravitational lens, bending light from more distant galaxies behind it towards the observatory, in a cosmic magnification effect.

Webb’s primary imager NIRCam — which operates in the near infrared wavelength spectrum because light from the early universe has been stretched out by the time it reaches us — has brought these faint background galaxies into focus.

Webb compiled the composite shot in 12.5 hours, achieving well beyond what its predecessor the Hubble Space Telescope could in weeks.

“Even though this is by no means the farthest Webb can see, it’s the deepest image ever taken, and shows the power of this remarkable telescope: tremendous sensitivity, a broad range of wavelengths, and sharp image clarity.”

Avi Loeb, a professor of astronomy at Harvard, explained the reddish arcs are the ancient galaxies, while the light colored circles and ellipses belong to the younger galaxy cluster in the foreground.

He added he was “thrilled” about the idea of Webb looking even closer to the Big Bang, back some 13.8 billion years ago.

The next set of images will be released Tuesday, revealing details about the atmosphere of faraway planets, “stellar nurseries” where stars form, galaxies locked in a dance of close encounters, and the cloud of gas around a dying star.

Biden conveyed a sense of awe that Webb is documenting universe imagery from some 13 billion years ago.

“It’s hard to even fathom,” the president said.

“These images are going to remind the world that America can do big things and remind the American people, especially our children, that there’s nothing beyond our capacity.”

Carina Nebula, a stellar nursery, is famous for its towering pillars that include “Mystic Mountain,” a three-light-year-tall cosmic pinnacle captured in an iconic image by Hubble.

Webb has also carried out a spectroscopy — an analysis of light that reveals detailed information — on a gas giant planet called WASP-96 b, which was discovered in 2014.

Nearly 1,150 light-years from Earth, WASP-96 b is about half the mass of Jupiter and zips around its star in just 3.4 days.

Nestor Espinoza, an STSI astronomer, told AFP that previous exoplanet spectroscopies carried out using existing instruments were very limited compared to what Webb could do.

“It’s like being in a room that is very dark and you only have a little pinhole you can look through,” he said of the prior technology. Now, with Webb, “You’ve opened a huge window, you can see all the little details.”

Launched in December from French Guiana on an Ariane 5 rocket, Webb is orbiting the Sun at a distance of a million miles (1.6 million kilometers) from Earth, in a region of space called the second Lagrange point.

Here, it remains in a fixed position relative to the Earth and Sun, with minimal fuel required for course corrections.

A wonder of engineering, the total project cost is estimated at $10 billion, making it one of the most expensive scientific platforms ever built, comparable to the Large Hadron Collider at CERN.

Webb’s primary mirror is over 21 feet (6.5 meters) wide and is made up of 18 gold-coated mirror segments. Like a camera held in one’s hand, the structure must remain as stable as possible to achieve the best shots.

Charlie Atkinson, chief engineer on the James Webb Space Telescope program at lead contractor Northrop Grumman, told AFP that it wobbles no more than 17 millionths of a millimeter.

After the first images, astronomers around the globe will get shares of time on the telescope, with projects selected competitively through a process in which applicants and selectors don’t know each other’s identities, to minimize bias.

Thanks to an efficient launch, NASA estimates Webb has enough propellant for a 20-year life, as it works in concert with the Hubble and Spitzer space telescopes to answer fundamental questions about the cosmos. 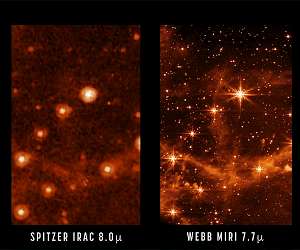 James Webb Space Telescope opens its eyes on the Universe

Space enthusiasts are holding their breath.

The James Webb Space Telescope, the most powerful ever sent into orbit, is set Tuesday to unveil breathtaking new views of the Universe with a clarity that’s never been seen before.

But the images themselves have been jealously guarded to build suspense ahead of the big reveal. 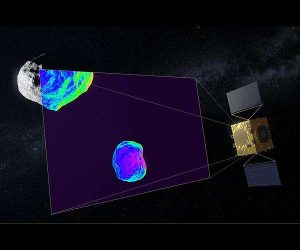 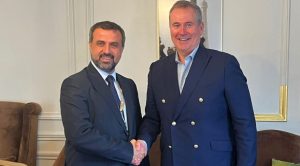