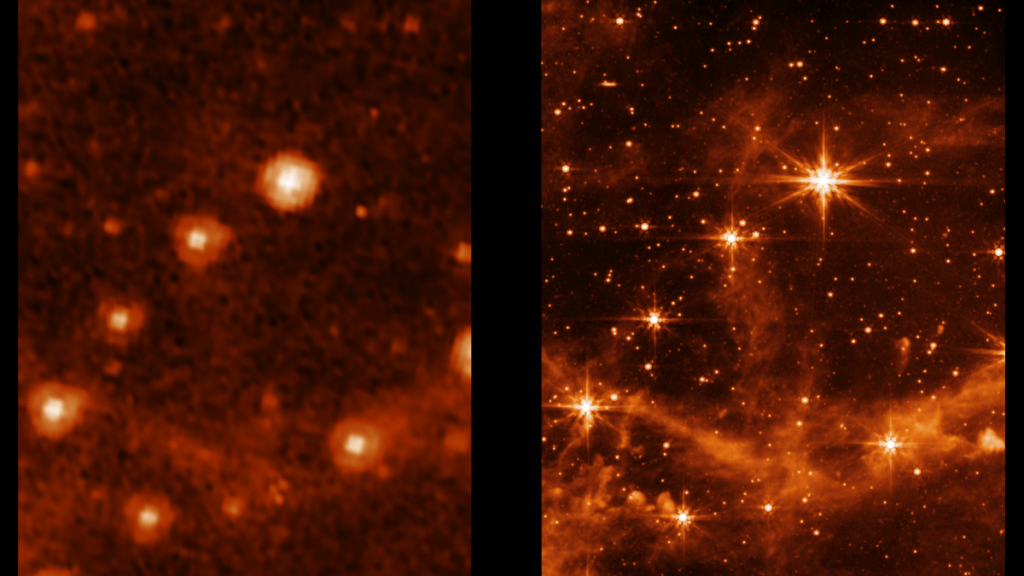 With NASA’s calibrations on the James Webb Space Telescope now in the homestretch, the agency offered a tantalizing sneak peek on Monday of just how powerful their new toy is.

In a side-by-side comparison of the old tech versus the new, NASA presented a picture of a star field in deep space taken by the retired Spitzer Space Telescope, next to one by Webb. To further demonstrate how much better Webb works, they made the two into a GIF, which shows smudgy blobs morphing into crisp, brilliant stars.

It’s as if someone put a stronger glasses prescription on the telescope.

The images capture infrared light from the Large Magellanic Cloud, a small satellite galaxy of the Milky Way, revealing a deep, dense field of hundreds of thousands of stars. Engineers chose the red color palette to emphasize contrast. Spitzer was one of NASA’s former premier observatories and the first to provide high-resolution images of the universe in the near- and mid-infrared wavelength range. Webb, with its vastly larger mirror and more sensitive detectors, will allow scientists to see the sky at these wavelengths with superior clarity.

Astronomers can appreciate that the images from the new telescope instruments are going to be better because of the larger primary mirror, said Marcia Rieke, a principal investigator for Webb, during a call with reporters on Monday.

“But it’s not until you actually see the kind of image that it delivers that you really internalize and go, ‘Wow, just think of what we’re going to learn,'” Rieke said. “Spitzer taught us a lot, but this is like a whole new world.”

Through Webb’s eyes, the universe is “unbelievably beautiful,” she said.

The new telescope has come a long way since its first snapshot in February, showing 18 separate golden blurry blobs representing one star. NASA promised better pictures were coming as they continued calibrations, able to make the star look like a single star. By mid-March, a new photo delivered on that promise: a star in Ursa Major, crystal-clear and flaming red with large spikes. NASA revealed an image in mid-March of a star in Ursa Major, crystal-clear and flaming red with large spikes, to demonstrate the progress of James Webb Space Telescope’s calibrations..
Credit: NASA

Less than two weeks ago, NASA achieved another critical milestone: the telescope reached full focus. Its level of precision bested engineers’ expectations, agency officials said, with resolution “as good as physically possible” for the size of the telescope.

Webb, a collaboration between NASA, the European Space Agency, and the Canadian Space Agency, will observe some of the oldest, faintest light in the universe. The powerful telescope will study a period less than 300 million years after the Big Bang, when many of the first stars and galaxies were born. Scientists will also use it to peer into the atmospheres of planets outside our solar system, called exoplanets. Discoveries of water and methane, for example, could be signs of potential habitability or biological activity — main ingredients of life.

Astronomers anticipate the telescope will facilitate a golden age in our understanding of the cosmos, providing never-before-seen snapshots of space billions of light-years away. It will also improve, as demonstrated with the Magellanic Cloud test images, scientists’ studies of more local galaxies, said Chris Evans, a Webb project scientist from ESA.

But what full-resolution pictures will they release first?

Mum’s the word, still. NASA officials said a selection of photos will be presented this summer with the accompanying scientific data.

Part of the decision-making process on those targets will depend on the schedule, after the engineers finish calibrating and testing the instruments. The scientists would rather not put themselves in a box, said Klaus Pontoppidan, of the Space Telescope Science Institute.

“We’d really like it to be a surprise,” he said.