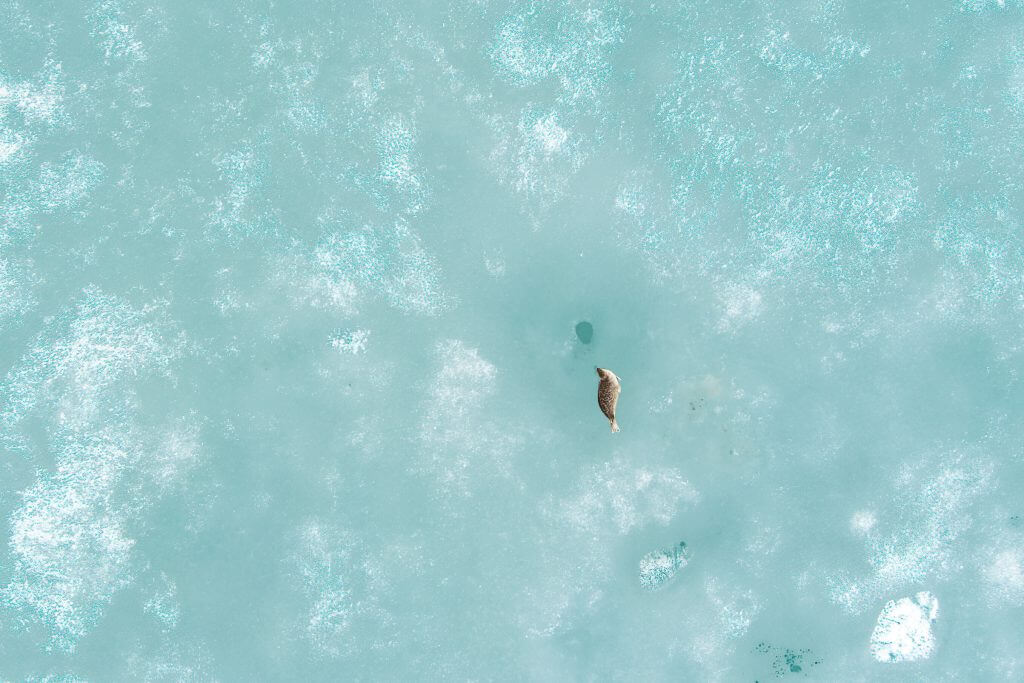 This summer, researchers managed to collect stunning drone images of both ringed seals and walruses. In one fjord, the St. Jonsfjorden, twelve ringed seals were found spread out throughout the fjord, resting on the fast ice. However, approaching and identifying these individuals is very challenging. Since ringed seals are hunted by polar bears, any mammal—either walking on four or two legs—will be avoided at all costs.

“By using a drone, we managed to take high resolution images of ringed seals on the ice resting next to their breathing holes. Based on these images, the species can be easily identified” says Geert Aarts, project leader of the Arctic Seal project. For this specific region, the researchers also obtained Maxar satellite images.

Since the ice is landlocked and doesn’t move, the locations of breathing holes are practically fixed. Therefore, the researchers could match the individual seals located on the drone image directly to the breathing holes visible in the satellite images. “Although we were aware of the potential of such satellite images for observing mammals from space, we were struck when noticing white lines across the ice shield connecting the ringed seal breathing holes. In this remote and hostile environment, this can only mean one thing, polar bear tracks”.

“Eventually, these images can then be fed to a machine learning algorithm and used to train a neural network“, says Jeroen Hoekendijk, Ph.D. candidate, who was part of the research team and works together with EPFL to further develop these techniques. By applying this trained network to satellite images, researchers hope to be able to automatically detect seals in these remote and hostile regions.

Seals and walruses are especially abundant in the Arctic regions. Each of these pinniped species has its own unique characteristics and relationship with the sea ice.

Ringed seals for example, make breathing holes in sea ice fastened to the coastline. These breathing tubes can be several meters long and connect the sea water underneath the ice with the air above. By using their claws on their front flippers, they prevent these breathing holes from freezing. During the long and dark winter months these breathing holes are covered by snow. These snow dens offer their pups some protection from the harsh conditions outside.

In contrast, harp seals rest and give birth on the drifting pack ice. This pack ice covers most of the north pole region in winter, connecting all landmasses in the polar region, but is reduced in size during the summer months. In contrast to fast ice, the pack ice drifts and can move several kilometers per day.

Sudden changes in current and wind direction can quickly cause a breakdown of the harp seal’s birthing platform. Walruses also make use of the pack ice, but individuals can also be found resting on land. Also, during the Svalbard research expedition this summer, the researchers managed to collect drone images from Walruses which may help others to develop similar machine learning techniques for this species.

Ultimately, the researchers hope to use these remote sensing techniques to locate seals in the Arctic. Due to climate change, their home is rapidly changing. This is particularly the case for the North Barents Sea and the islands of Svalbard and Franz Josef Land.

This region is the fastest warming place on Earth, with average temperatures rising 2.7˚Celsius per decade, and even 4˚Celsius per decade during the autumn months. Therefore, knowing which habitats seals rely on is urgently needed to study the effect of climate change and conserve these species.

Provided by
Royal Netherlands Institute for Sea Research
Citation:
Using eyes in the sky to locate seals in a rapidly changing Arctic (2022, September 14)
retrieved 15 September 2022
from https://phys.org/news/2022-09-eyes-sky-rapidly-arctic.html
This document is subject to copyright. Apart from any fair dealing for the purpose of private study or research, no
part may be reproduced without the written permission. The content is provided for information purposes only.