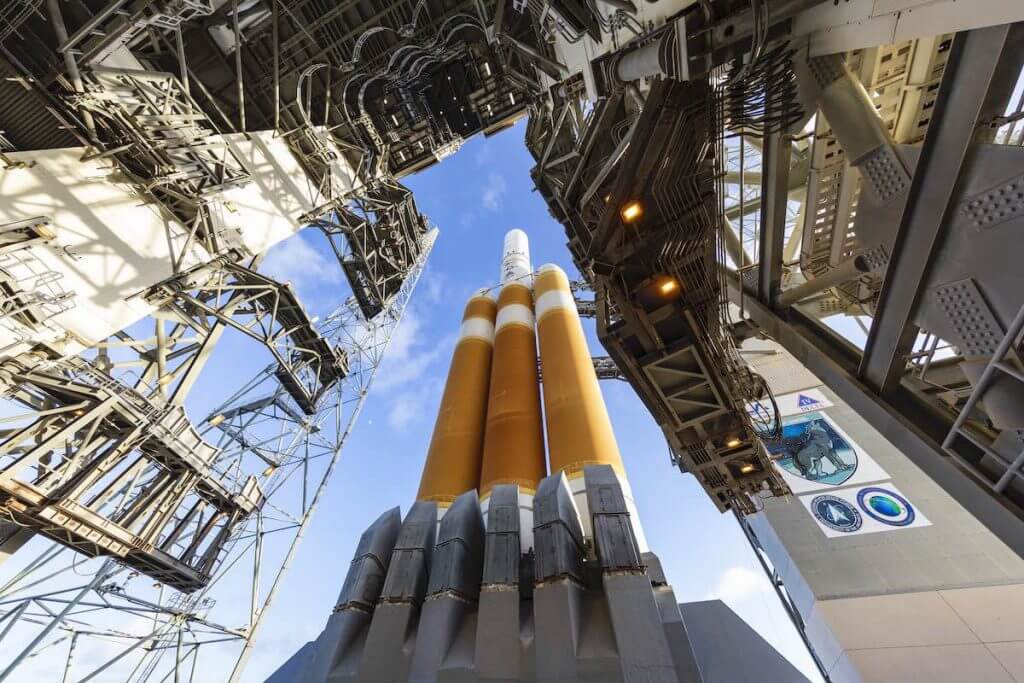 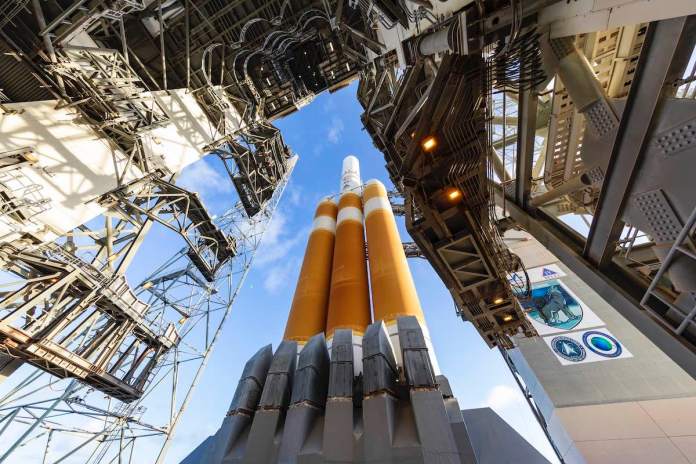 United Launch Alliance early Thursday delayed the launch of a triple-core Delta 4-Heavy rocket — the largest launcher in the company’s fleet — until Friday to allow engineers more time to resolve an issue with a ground pneumatics control system.

The launch company planned to fire the Delta 4-Heavy rocket into space at 2:12 a.m. EDT (0612 GMT) from Cape Canaveral with a classified payload for the National Reconnaissance Office, the U.S. government’s spy satellite agency.

But the ULA launch team halted the countdown to give technicians time to troubleshoot an issue with a nose cone heater. Ground crews replaced two blown fuses associated with the heater to fix that problem.

But engineers studying a separate snag with a “critical ground pneumatics control system” could not resolve the problem in time to resume the Delta 4’s countdown, fuel the rocket and proceed with the launch before the closure of Thursday’s roughly four-hour launch window.

There is an 80 percent chance of good weather for launch Friday, according to the U.S. Space Force’s 45th Weather Squadron at Cape Canaveral.

Powered by three hydrogen-fueled main engines and a long-endurance cryogenic upper stage, the Delta 4-Heavy rocket is set to loft a top secret NRO spy satellite into a geosynchronous orbit hugging the equator more than 22,000 miles (nearly 36,000 kilometers) above Earth.

The satellite, expected to deploy from the Delta 4’s upper stage hours after liftoff, is believed to be the next in a series of “Advanced Orion” or “Mentor” listening stations designed to intercept telephone calls, data transmissions, and other communications traffic from U.S. adversaries.

Following its standard practice of minimal disclosure, the NRO has not released details about the satellite’s design or purpose, other than acknowledging its general intelligence-gathering mission.

Read our mission preview story for additional background on the launch and its classified payload.

The one-day delay in the Delta 4-Heavy’s launch could push back the liftoff of a SpaceX Falcon 9 rocket from a neighboring pad at Cape Canaveral from Friday evening until no earlier than Saturday at 7:19 p.m. EDT (2319 GMT). Confirmation of a delay for SpaceX’s next mission was not immediately available early Thursday.

The Falcon 9 rocket is awaiting launch from pad 40 with Argentina’s SAOCOM 1B radar imaging satellite, a twin to an all-weather Earth-imaging surveillance platform launched in 2018 on a Falcon 9 mission from Vandenberg Air Force Base in California.

The SAOCOM 1B mission will be the first rocket launch from Cape Canaveral since 1969 to fly on a southerly course to deploy its payload into a high-inclination orbit the flies near Earth’s poles on each trip around planet. The unusual trajectory will require the Falcon 9 rocket to first fly south-southeast from Cape Canaveral over the Atlantic Ocean, then bend its course back to the west in a right turn to skirt the coast of South Florida.

Known as a “dogleg” maneuver, the right turn will ensure the rocket’s impact point never crosses Florida in the event of an in-flight failure that causes the vehicle to crash back to Earth. The launcher will then head over the Florida Straits and Cuba before placing the SAOCOM 1B radar satellite into orbit.

The Falcon 9’s first stage booster will return to landing at Cape Canaveral after completing its nearly two-and-a-half minute firing. It will be the first landing of a Falcon 9 booster at Cape Canaveral since March, following a string of missions during which the reusable Falcon 9 first stage landed on one of SpaceX’s ocean-going drone ships.

Range safety officials began studying the southerly launch trajectory after a wildfire at Vandenberg Air Force Base — where nearly all the U.S. launches into polar orbit originate — threatened launch and payload processing facilities in 2016. SpaceX elected to use the polar launch trajectory from Cape Canaveral to allow the company to reduce staffing levels at Vandenberg during a period with few launches there, Gwynne Shotwell, SpaceX’s president and chief operating officer, told reporters last December.

SAOCOM 1B was previously scheduled for launch in March, but Argentine officials called off the mission due to concerns about the coronavirus pandemic. Engineers placed SAOCOM 1B in storage at Cape Canaveral until early July, when engineers returned to Florida from Argentina to finish readying the spacecraft for liftoff.

The launch of SAOCOM 1B was again delayed from late July because the range was not available for the launch, according to SAOCOM 1B team members. Sources said the delay was caused by range safety and overflight concerns with the high-priority national security payload mounted on top of ULA’s Delta 4-Heavy rocket at pad 37B, a few miles south of pad 40.

The southerly trajectory required for the SAOCOM 1B mission will take the Falcon 9 rocket closer to the Delta 4 pad than for a typical launch toward the east.

SpaceX has another launch set to go soon after SAOCOM 1B.

A Falcon 9 rocket is being readied for launch from pad 39A at the Kennedy Space Center, a few miles north of pad 40 and the Delta 4 launch facility at pad 37B. The Falcon 9 will carry SpaceX’s next batch of around 60 Starlink broadband satellites into orbit.

Before the delay of the Delta 4-Heavy launch and the possible slip in the launch of SAOCOM 1B to Saturday, the Falcon 9/Starlink mission was scheduled for liftoff Sunday at 10:08 a.m. EDT (1408 GMT). It was not immediately clear if the Falcon 9/Starlink launch could go forward Sunday, or if it might be pushed back in a ripple effect from the delays of the preceding launches.

Brig. Gen. Doug Schiess, commander of the 45th Space Wing which oversees the launch range at Cape Canaveral, said Tuesday that the busy launch schedule could make for a “historic week” at the Florida spaceport.

The last time three rockets took off from Cape Canaveral in the same week was in August 2001, when a Titan 4 rocket, a Delta 2 launcher, and a NASA space shuttle launched from different pads in a period of less than five days.