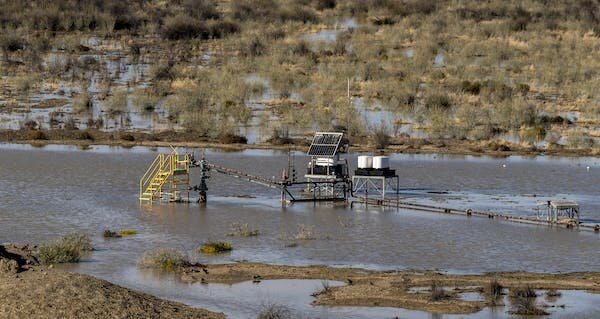 The heart-shaped Lake Eyre Basin covers about one-sixth of Australia. It contains one of the few remaining pristine river systems in the world.

But new research shows oil and gas activity is extending its tentacles into these fragile environments. Its wells, pads, roads and dams threaten to change water flows and pollute this magnificent ecosystem.

The study, by myself and colleague Amy Walburn, investigated current and future oil and gas production and exploration on the floodplains of the Lake Eyre Basin. We found 831 oil and gas wells across the basin—and this number is set to grow. What’s more, state and Commonwealth legislation has largely failed to control this development.

State and national governments are promoting massive gas development to kickstart Australia’s economy. But as we show, this risks significant damage to the Lake Eyre Basin and its rivers.

This country has been looked after for tens of thousands of year by First Nations people, including the Arrernte, Dieri, Mithaka and Wangkangurru. This care continues today.

The biggest rivers feeding the basin—the Diamantina, Georgina and Cooper—originate in western Queensland and flow to South Australia where they pour into Kathi Thanda-Lake Eyre.

As they wind south, the rivers dissect deserts and inundate floodplains, lakes and wetlands—including 33 wetlands of national importance.

This natural phenomenon has happened for millennia. It supports incredible natural booms of plants, fish and birds, as well as tourism and livestock grazing. But our new research shows oil and gas development threatens this precious natural wonder.

Our analysis used satellite imagery to map the locations of oil and gas development in the Lake Eyre Basin since the first oil wells were established in late 1950s.

We found 831 oil and gas production and exploration wells exist on the floodplains of the Lake Eyre Basin—almost 99% of them on the Cooper Creek floodplains. The wells go under the river and its floodplains into the geological Cooper Basin, considered to have the most important onshore petroleum and natural gas deposits in Australia.

The CSIRO recently examined likely scenarios of 1,000 to 1,500 additional unconventional gas wells in the Cooper Basin in the next 50 years. It predicted these wells would built be on “pads”—areas occupied by mining equipment or facilities—about 4 kilometers apart. They would typically access gas using horizontal drilling and hydraulic fracturing, or fracking.

Fracking is the process of extracting so-called “unconventional gas.” It involves using water and chemicals to fracture deep rocks to extract the gas. This polluted water, known to be toxic to fish, is brought back to the surface and stored in dams.

Two locations we focused on were in South Australia at the protected, Ramsar-listed Coongie Lakes site, which was recognized as internationally significant in 1987. The other site was in Queensland’s channel country, also on the Cooper floodplain.

In total across the Coongie Lakes sites, we found a three-fold increase in wells: from 95 in 1987 to 296 last year. We also identified 869 kilometers of roads and 316 hectares of storage pits, such as those that hold water.

Some of these dams could potentially hold polluted fracking water and become submerged by flooding, particularly at Coongie Lakes.

A disaster waiting to happen?

Examples from around the world already show oil and gas exploration and development can reduce water quality by interrupting sediments and leading to elevated chemical concentrations. Production waste can also degrade floodplain vegetation.

The CSIRO says risks associated with oil and gas development in the Cooper Basin include:

The laws have failed

Our findings raise significant questions for Australian governments and the community.

Are we prepared to accept industrialization of the Lake Eyre Basin, and the associated risk of pollution and other environmental damage? Have the companies involved earned a social license for these activities? Where do the profits end up, and who will bear the social, environmental and financial costs of such intense development?

Clearly, state and federal environmental protections have failed to stop unfettered development of the basin.

These policies include the Lake Eyre Basin Agreement, signed by the states, the Commonwealth and the Northern Territory, which has been in place since 2000.

Australia’s federal environment law—the Environment Protection and Biodiversity Conservation Act—is supposed to protect nationally important areas such as Ramsar wetlands. Yet our research identified that just eight developments in the basin were referred to the Commonwealth government for approval and with only one deemed significant enough for assessment. This legislation does not deal adequately with the cumulative impacts of development.

And finally, gas extraction and production is associated with substantial “fugitive” emissions—greenhouse gases which escape into the atmosphere. This undermines Australia’s emissions reduction efforts under the Paris Agreement.

The governments of South Australia and Queensland should restrict mining development in the Lake Eyre Basin. And stronger federal oversight of this nationally significant natural treasure is urgently needed.

In response to this article, chief executive of the Australian Petroleum Production & Exploration Association, Samantha McCulloch, said in a statement: “The oil and gas industry takes its responsibilities to the environment and to local communities seriously and it is one of the most heavily regulated sectors in Australia. The industry has been operating in Queensland for more than a decade and the gas produced in Queensland plays an important role in Australia’s energy security.”


This article is republished from The Conversation under a Creative Commons license. Read the original article.

Citation:
The magnificent Lake Eyre Basin is threatened by 831 oil and gas wells, and more are planned (2022, October 8)
retrieved 9 October 2022
from https://phys.org/news/2022-10-magnificent-lake-eyre-basin-threatened.html
This document is subject to copyright. Apart from any fair dealing for the purpose of private study or research, no
part may be reproduced without the written permission. The content is provided for information purposes only.