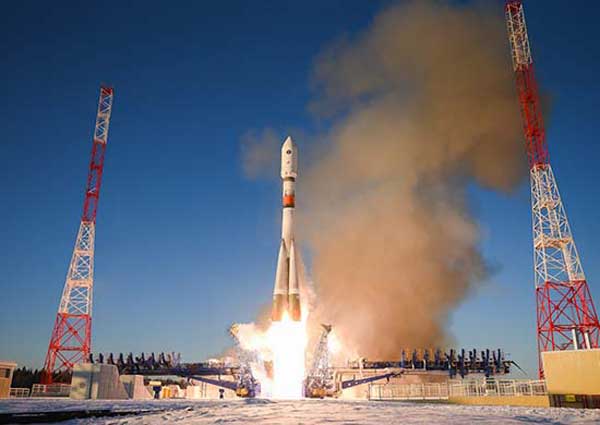 Ambitious launch schedules typically go awry when a rocket suffers a catastrophic failure that takes months to investigate and implement modifications to ensure the same accident doesn’t happen again. In the majority of cases, the failures involve a machine launching a machine. All that can be replaced, albeit at substantial cost.

Russia’s ambitious launch plans for 2022 fell apart due to a far more momentous and deadly action: the nation’s invasion of Ukraine. The decision ruptured cooperation with the West on virtually every space project on which it was safe to do so. The main exception was the International Space Station (ISS), a program involving astronauts and cosmonauts that would be difficult to operate safely if Russia suddenly withdrew (as it indeed threatened to do).

Due to the invasion, Western partners canceled seven launches of foreign payloads in less than a month. The cancellations put Russia even further behind the United States and China in launch totals this year.

A Good Start, but Then…

Russia’s 2022 launch campaign started out well enough when a Soyuz-2.1a rocket launched the Neitron No. 1 reconnaissance satellite from the Plesetsk Cosmodrome on Feb. 5.

Thirteen Soyuz rockets had now launched 428 satellites. Only six more launches, spaced out roughly a month apart, would be needed to fully deploy the company’s satellite constellation later in the year. The next batch of spacecraft was scheduled to fly on March 5 from the Baikonur Cosmodrome in Kazakhstan.

The launch would never occur. Russia invaded Ukraine two weeks after the French Guiana launch. The European Union, Great Britain, the United States and other Western nations protested the attack and imposed sanctions on Russia. Relations between Russia and the West plunged to their lowest level since before the end of the Cold War in the late 1980’s.

The result was a strange scene at Baikonur. A Soyuz-2.1b rocket topped with 36 OneWeb satellites was rolled out to the launch pad, ready to add to the company’s growing constellation. All OneWeb had to do is promise Russia that the satellites would never be used for military purposes. And oh, and the UK government had to divest its part ownership of the company.

Russia’s demands were widely seen as a poison pill designed to cancel the launch. OneWeb had marketed its services to various Western militaries and civilian government agencies that need reliable broadband services in remote locations such as the Arctic. The company was not willing to give up these potentially lucrative market segments.

The UK government had spent $500 million to help bail OneWeb out of bankruptcy in 2020; it wasn’t going to divest its interest in the company with the constellation partially deployed. OneWeb was a valuable investment for a nation that found itself no longer able to participate in the European Union’s satellite programs after exiting the union in January 2020.

So, OneWeb and the UK government predictably refused the demands. Roscosmos removed the Soyuz-2.1b rocket from the launch pad at Baikonur and took OneWeb’s satellites off the booster. The Russians said the company would not receive a refund of its money for the launch. The fate of the 36 satellites remains unclear.

OneWeb subsequently worked out a deal with Elon Musk’s SpaceX to launch the remaining satellites in the constellation. Launches are due to resume at the end of this year.

Arianespace put cooperation with Russia on all commercial launches of Soyuz rockets on indefinitely hold in compliance with sanctions imposed by Europe.

The Russian invasion of Ukraine resulted in the cancelation of the launch of the European Space Agency’s (ESA) ExoMars mission aboard a Russian Proton rocket in September. The mission consisted of an European-built Rosalind Franklin rover and a Russian descent module.

Favorable windows for launching spacecraft to Mars occur roughly every two years and last for a few months at a time. With only months to go before the planned launch, ESA lacked sufficient time to replace the Russian descent module and find another launcher before the window would close.

ESA is exploring cooperation with NASA on how to move forward with the mission. The launch is now expected no earlier than 2028. The Rosalind Franklin rover will spend years in a very expensive, climate-controlled storage facility before it can explore the frozen surface of Mars.

To Everything (Spin Spin Spin)

When he wasn’t threatening other nations with nuclear annihilation, then-Roscosmos General Director Dmitry Rogozin brushed off the significance of having wealthy foreign customers cancel seven launches. The boosters would be used to launch a whole variety of domestic payloads, he assured the world. Russian satellites on Russian rockets. A patriotic endeavor during war time. It all sounded good.

Western experts were more skeptical. Russia has been under sanctions since the country annexed the Crimea region of Ukraine in 2014. Those sanctions made it more difficult for Russia to launch satellites by denying the industry crucial technologies. Further U.S. and European sanctions imposed after the Ukraine invasion in February have made the situation worse.

Rogozin talked about using the descent module that would have delivered the Rosalind Franklin rover to Mars for a Russian mission to the Red Planet. It’s unclear exactly what that mission would look like or when it would be launched.

History is not on the Russia’s side when it comes to Mars. In sharp contrast to the Soviet Union’s brilliantly executed Venus program, the Soviet/Russian efforts to explore the Red Planet have been a long string of failures and partial successes. The most recent Russian mission, Phobos-Grunt, didn’t even make it out of Earth orbit after launch in 2011.

ExoMars represented an opportunity for Russia to be part of a mission that had a high likelihood of success. Russia could get back in the game of planetary exploration on a world that had long given it nightmares for 60 years. An opportunity lost.

Whatever Russia’s Mars mission turns out to be (or not to be), the bombastic Rogozin won’t be overseeing it. Putin relieved him as Roscosmos’ boss on July 15. Russian media reports suggested he wasn’t fired for cause, but instead was being promoted for his outspoken support for Russia’s invasion of its neighbor. Some reports indicated he might be appointed as an overseer of Russia’s occupation of Ukraine.

A review of Rogozin’s four-year tenure at Roscosmos is a subject for another time, but the general consensus is that Russia’s civilian space program has seen much better days. That assessment is born out to a large extent by launch total for the year thus far, depressed as it has been by the loss of launches.

All Government, (Almost) All of the Time

Russia successfully launched 11 times without any failures through Aug. 1. That put the nation a distant third behind the United States (48) and China (27) during the same time period. Russia led the world in launches not that long ago, as it dominated the market for launching geosynchronous communications satellites.

Then along came SpaceX, and the communications satellite market shifted to low- and medium-orbit constellations like the one that OneWeb is building. The comnpany’s block buy of Soyuz launches gave Russia’s space industry a much needed shot in the arm that has now evaporated.

Soyuz-2.1a was the most used Russian booster with six launches, followed by the Soyuz-2.1b with two flights. Three other boosters were launched one time apiece.

The Soyuz ST-B flight from Kourou was the only Russian rocket to carry commercial payloads. The other 10 launchers were dedicated to orbiting government spacecraft. Six launches carried defense payloads, another one orbited a pair of GLONASS navigation satellites. Three other launches supported ISS operations.

The Angara 1.2 launcher made its maiden flight on April 29. Although the launch appears to have gone as planned, observers have not seen any orbital maneuvers by the MKA EMKA No. 3 reconnaissance satellite. That might indicate that the spacecraft failed in orbit.

Angara 1.2 is the smallest booster in the Angara rocket family, consisting of a single first stage and an upper stage. It is designed to place 3.8 metric tons (4.2 US tons) into low Earth orbit. A larger version, Angara A5, is a heavy-lift vehicle with four liquid boosters attached to the first stage.

This was actually the second test launch of the Angara 1.2 rocket. An Angara 1.2PP booster with a partially fueled second stage made a successful suborbital flight in December 2014.

Russia also conducted a rare launch of the Soyuz-2.1v rocket on Aug. 1. The booster placed the Kosmos 2558 inspection satellite into the same orbital plane as USA 326, an American military satellite launched by a SpaceX Falcon 9 rocket in February. There is suspicion that Kosmos 2558 might be spying on the U.S. spacecraft.

It was only the eighth launch of a Soyuz-2.1v since the booster’s maiden flight in December 2013. The launcher is capable of placing payloads weighting up to 2,850 kg (6,283 lb) into LEO.

Despite threats by Russia to exit the ISS program and send the station spiraling into the atmosphere over North America, launches to the orbital facility continued as scheduled. Russia launched one three-member crew and two Progress resupply ships to ISS during the first seven months of the year. One Soyuz spacecraft and a Progress vehicle also departed the station.

On Oct. 5, 2021, Shkaplerov flew film director Klim Shipenko and actress Yulia Peresild to the station where they filmed scenes for a motion picture named, “The Challenge.” Shkaplerov stayed aboard while Shipenko and Peresild returned to Earth with cosmonaut Oleg Novitsky on Soyuz MS-18 after 12 days in space.

In addition to resupplying the space station, the Progress MS-19 and MS-20 freighters brought 10 small experimental satellites to ISS for deployment by cosmonauts during small walks. Southwestern State University in Kursk built eight YuZGU-55 (a.k.a., RadioSkaf RS-10-17), which are 3U CubeSats designed as technology demonstrators.

Southwestern State University teamed with Ryazan State Radio Engineering University to develop the Tsiolkovsky-Ryazan 1 and 2 experimental satellites. The 3U CubeSats are designed for amateur radio use.

Russia launched a total of 57 payloads into orbit through Aug. 1. Thirty-four payloads — 59.6 percent — were placed in orbit during a single Soyuz ST-B launch of OneWeb satellites. Ten other payloads — 17.5 percent — were the university-built 3U CubeSats transported to ISS by the Progress M-19 and MS-20 freighters. The 44 payloads make up 77.1 percent of Russia’s total.

Although Roscosmos is Russia’s most public government space agency, it only launched three times during the first seven months of the year, all in support of the space station.

Russian launches were conducted from three spaceports in three countries.

Arianespace launched a Soyuz ST-B booster with 34 OneWeb satellites from French Guiana before ESA suspended cooperation with Russia over the Ukraine invasion. No additional flights are currently scheduled.

Russia conducted no launches from its Vostochny Cosmodrome during the first seven months of the year.