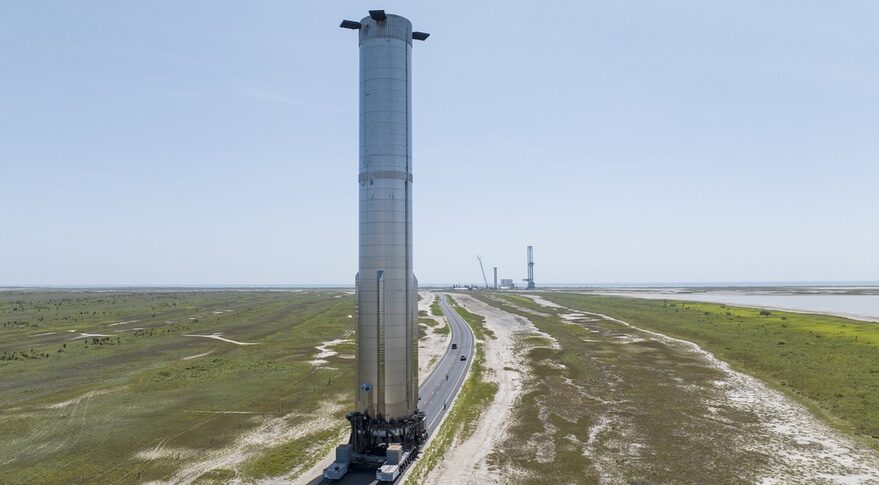 WASHINGTON — A test of the booster for SpaceX’s first orbital Starship vehicle July 11 ended with flames erupting unexpectedly from the base of the vehicle, triggering a fire at the pad.

Video of testing activities at SpaceX’s Starbase complex at Boca Chica, Texas, showed a burst of flames at the base of the Super Heavy booster called Booster 7 around 5:20 p.m. Eastern. Later, at least one fire was seen in the vicinity of the pad, presumably triggered by the incident, sending a plume of black smoke into the air.

It’s not clear yet what caused the anomaly. SpaceX had not issued warnings that it would attempt a static-fire test of Booster 7. Such a test, involving some or all of the 33 Raptor engines in the booster, is a major milestone before the vehicle’s first orbital launch attempt.

In a series of tweets, Elon Musk, SpaceX founder and chief executive, said the company was planning a “spin start test” of the engines, one that did not involve ignition of the engines. “Raptor has a complex start sequence,” he wrote. “Going forward, we won’t do a spin start test with all 33 engines at once.”

While Musk acknowledged the incident was “not good,” it was not clear what damage it did to the booster itself. “Base of the vehicle seems ok by flashlight,” he said in a late-night tweet. “Will know more in the morning.”

SpaceX has been conducting tests of both Booster 7 and a Starship upper stage called Ship 24 at Starbase ahead of a first orbital launch of the vehicle. SpaceX has not set a formal launch date for that first flight, nor is it clear how this incident will affect those plans.

On that orbital launch, the Super Heavy booster will either splash down in the Gulf of Mexico or attempt a landing back at Starbase, according to a recent Federal Communications Commission filing. Starship will briefly enter orbit at an altitude of about 250 kilometers before reentering and making a “powered, targeted landing” in the Pacific Ocean just north of Hawaii. That FCC application for an experimental license covers a six-month period starting Aug. 1.

SpaceX will still need a launch license from the Federal Aviation Administration in order to conduct the launch. While the FAA completed an environmental assessment June 13 allowing such launches to proceed, that review requires SpaceX to implement dozens of measures to mitigate environmental effects.